Japan is a hierarchical society based on formal rituals and traditions. It’s suggested the naked communion experience the onsen provides, is a way of helping to break down those traditional barriers. Stripped of our clothing, we are all the same.

Walking carefully along the snow-covered village street, I’m unable to look up and take in my new surroundings. The snow on the ground is thick and crunches underfoot. I’m aware discreet patches of ice wait for the unwary. I’m doing my best not to slip and fall. Usually a curious observer, today I’m cautiously following my friend’s footsteps marks, like a puppy following its owner, as we make our way to an onsen.

With a name like Nozawa Onsen, it would be sacrilege to not have at least one onsen experience. The traditional Japanese village is located in the northern part of the Nagano prefecture, on Japan’s Honshu island. Nozawa Onsen (meaning hot spring village) in winter (December – March) transforms from a town of about 4,000 locals, into a ski town, packed with visitors. Only four hour’s drive northwest of Tokyo, Nozawa is a popular destination for anyone seeking a unique Japanese ski experience.

During the peak months of January and February, the town swells with tourists from many countries, hoping to catch some of the powder, referred to as ‘japow.’ After our slight delay, in getting to Nozawa, two of my lads and I are in Nozawa for that very reason! 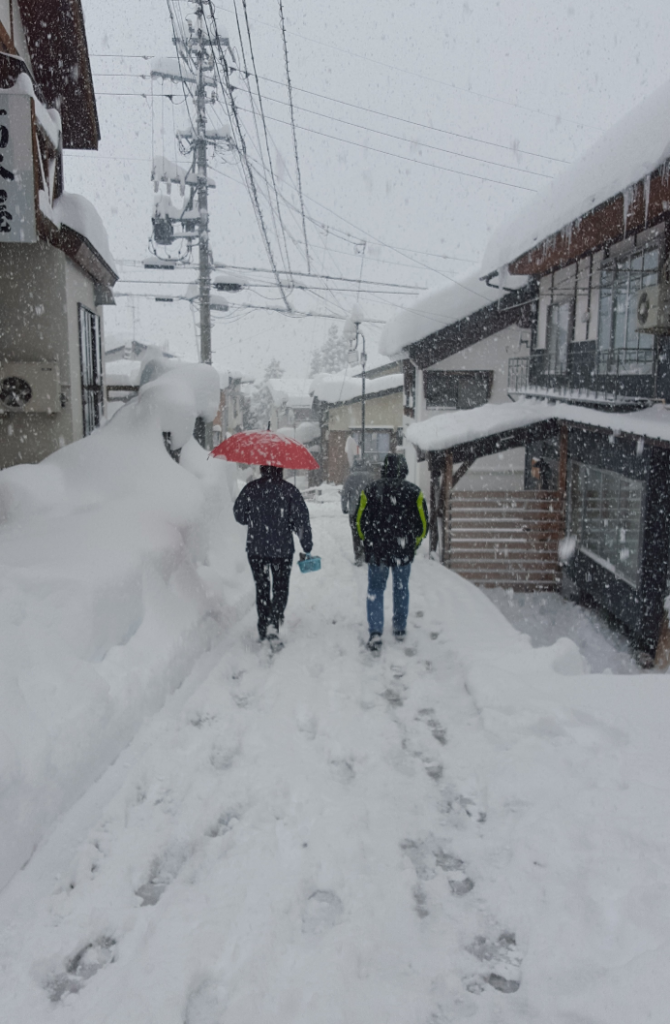 Following those who know where they’re going

It is mid-January and we’d been making the most of the powder on the slopes. Three metres had fallen since our arrival a few days earlier. But with my skiing over for the day, I was craving relaxation – Japanese style! Trudging through the snowy back streets on a mission to find what the travel websites refer to as “a unique and traditional Japanese experience.”

Onsens are scattered throughout Japan’s islands. Below the ground surface lies an extensive network of geothermal-volcanic activity filled with underground springs and a ready supply of naturally hot water. Tapping into this natural resource, the Japanese have created bathing facilities around locations where they’ve engineered to draw the hot water from underground. Because of its origin (from the ground,) the water contains traces of minerals including iron, sulphur, and metabolic acid. These are said to have therapeutic value to the body, including removing the ache from limbs Perfect after a day’s skiing!

Nozawa has many onsens to choose from

Nozawa boasts 14 public hot spring baths (soto no-yu). Today we’re trying the Furusato No Yu onsen, which opened in December 2011. My friends (who’ve visited this onsen before) advise me we’ve arrived. It’s difficult to make out the ornate Japanese architecture through the heavy snow falling, but we step under the awning and slide open the doors. Embracing the warm interior we shake the snow from our coats and beanies. 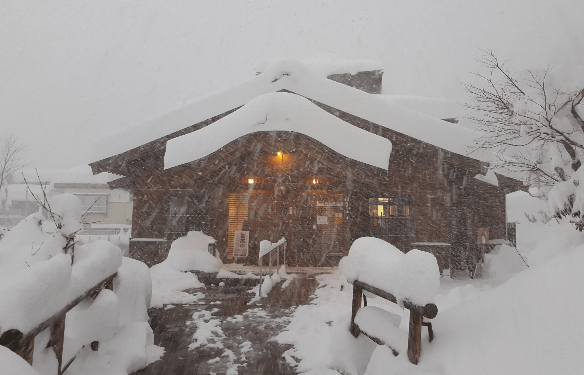 Not all public onsens require an entrance fee, but this one does. We pay the 400 Yen to the smiling ladies at reception who after the customary bowing, usher us to our separate change rooms. Furosato No Yu is not a mixed onsen – the men and women bathe separately which is usually the onsen trend, but not always. (Best check first if you feel uncomfortable being naked with strangers of the opposite sex.)

Onsen etiquette requires undressing in the change rooms, down to your birthday suit. This is deemed a ‘cleansing’ experience. So one must shower first before entering the spring baths to thoroughly “cleanse” one’s self.  This is a ritual on its own! For the uninitiated, plastic stools in front of individual shower cubicles are used to sit on while showering (it’s rare to find a standing shower I’m told.) Sitting is more polite because it creates less splash for others around you.  Remember, the Japanese are always outwardly polite. 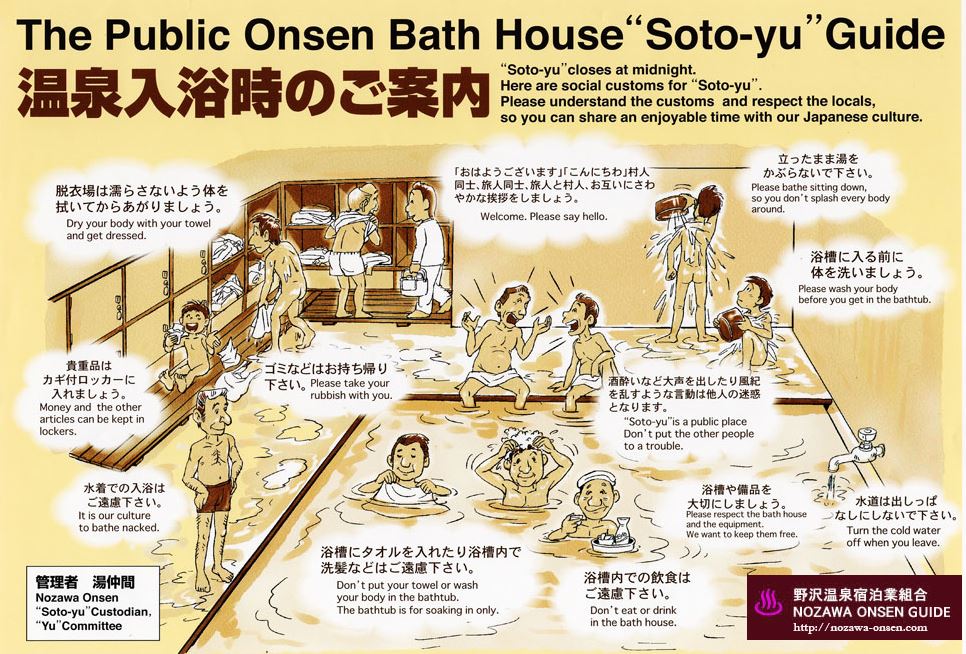 There is little banter among the showering patrons. It seems to be the place for quiet contemplation. A small hand towel (the size of a face washer) can be taken into the baths. From observing the locals, the custom is to place these teeny towels on your head (they wouldn’t cover many body parts!)

A sign indicates the water temperature of the first bath (atsuyu) is 42°C. I cautiously step into the water, wary of the heat. It’s too hot for me, so I quickly exit and head to the outdoor bath (rotenburo.) Crossing the wet stone floor, it takes me an awkward minute to locate the handle on the steamed-up glass sliding door. Stepping into the open the brisk air is welcoming and there’s less of the pungent sulphuric smell.  I quickly slip under the warm water to escape the cold. At all times being careful not to splash the other bathers.  At around 39°C this bath temperature is more to my liking. 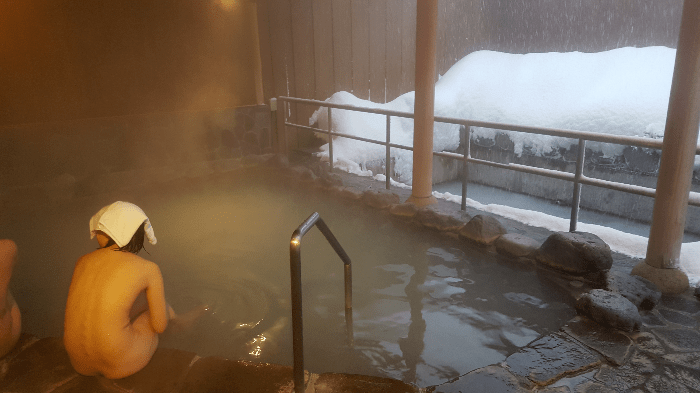 In the distance, I can make out the peaks of the snow-capped Kenshai mountains. Their massive jagged outline overshadows the village below. Conversations from other women in the outdoor onsen are hushed, preserving the tranquillity, respectfully allowing the bathers to absorb the magical surroundings in a steam-filled silence.

With the snow falling beyond the timber roof awning, I feel my over-used aching joints relax from the warm mineral-imbibed water. The soothing heat and minerals work miracles on aching muscles. 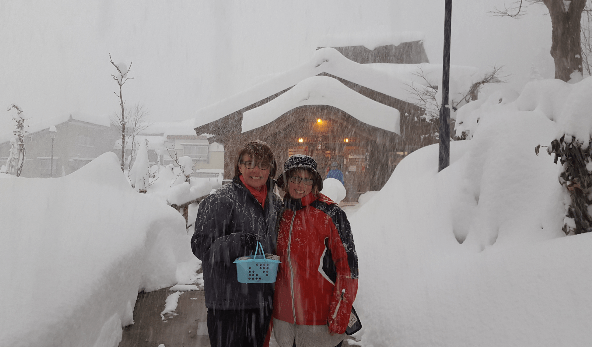