Expect the unexpected when travelling with teenagers

The Japanese Shinkansen is fast. Also referred to as bullet trains (because of their sleek aerodynamic shape) Shinkansens are part of a high-speed passenger rail network traversing the Japanese countryside at lightning speed!

On October 1st, 1964, just before the ’64 Tokyo Olympics, the inaugural shinkansen began speedily transporting passengers across the 515 km (320 miles) between Tokyo and Osaka.  Today, an extensive network of Shinkanens deliver passengers to various destinations in comfort, style and, always on time.  They cost more than the average train trip but they are worth the experience, even if you only do it once.

I was on my first shinkansen with two of my sons and we were travelling from Tokyo station to Iiyama station in Honshu’s north (a 90-minute shinkansen journey or four hours by car.) Iiyama is a small outpost town from where you catch a connecting shuttle bus to Nozowa Onsen snow resort My lads (Mr 18 and Mr 13) and I were on the first leg of our Japan trip – six nights booked in the snow town, Nozawa.

One of my boys clocked our shinkansen at 220km/hour using an app on his phone. The fastest train serves the Tokaido Shinkansen line, linking Tokyo Station and Shin-Osaka Station in Osaka.  That one can travel up to to 360 kilometers per hour (a new record set during a test run in 2019.) But they cap the speed at an astonishing 285 kilometers per hour!  I can tell you its impossible to notice the scenery at 220km/ hour!

All trains in Japan run to a clockwork tight schedule. And the Shinkansens manage to do it in stealth mode. They pull up at the station, passengers alight and the Shinkansens move off with perfectly timed, quiet precision.  They wait for no-one, as we discovered on our 2017 trip to Japan. 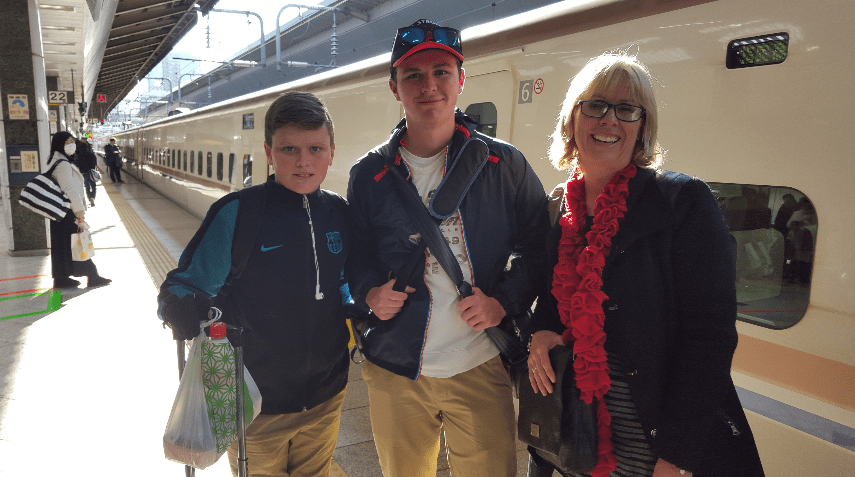 Tokyo station – about to board our first shinkansen 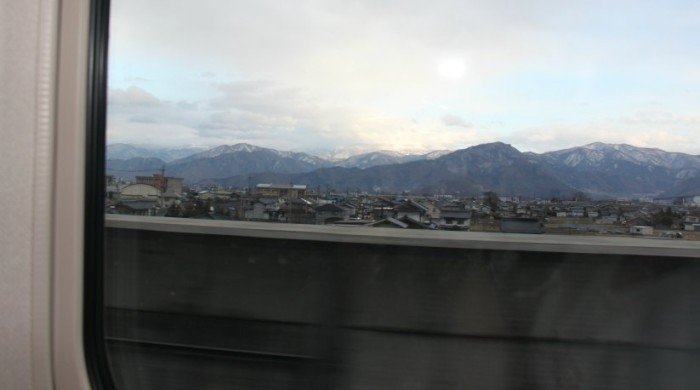 Tokyo city is quickly left behind and the scenery transforms to mountains before you can open your Bento box.

The quick train ride from Tokyo station to Iiyama station

As is the custom, we’d purchased individual bento boxes to enjoy on the journey.

The boys plugged their phones into re-charge and we settled into our comfortable seats.

I hadn’t realised we were so close to Iiyama station when I looked up to see the screen announcing the next stop as “Iiyama.”

We hastily closed the bento boxes, gathered the day packs, and stood up to move towards the door to exit the train.

As we step off the train, luggage in tow, my youngest turns to me and asks, “have you got my mobile phone?”

His face tells me he doesn’t. At the same time, my eldest turns to me and madly patting his pockets, says, “I think I’ve left mine on the train too.”

Not having the time to say what I felt, I said to them “you’ll have to be quick!”

They race back onto the Shinkansen train, to retrieve what they “think” they’ve left behind. I watch from the platform with the luggage. Mr 13 races to the train door, only to have it slide shut with a quiet “shhhsssssh” sound, with him still on the inside.

I watch in disbelief as the Shinkansen speeds away, efficiently and quickly as Shinkansens are built to do, with my two lads STILL onboard.

Probably a useless gesture. Shinkansens move to full speed quickly, I was probably a speck in the distance, a lone mother mouthing a useless last-minute plea to her child.

So, there I was a solitary figure standing on the platform at Iiyama station. Surrounded by many bags. It was almost comical – except I wasn’t laughing. Instead, I felt a sinking feeling overwhelm me. Here I was a single mum, separated from her kids in a foreign country.

When in doubt think on your feet

I shuffled/dragged/lifted all the pieces of luggage to the lifts.  It took a couple of trips. We’d met another Australian family (from Melbourne) at the Tokyo station.  They were waiting at the lifts.

I said to them shakily, “What do you do when you get off the train but your kids stay on?”

There was a sympathetic chorus of “Oh no” as they entered the opening lift doors. I watched the lift doors shut, leaving me behind (again.)

“Oh yes,” I muttered to myself, wondering what my next move would be. 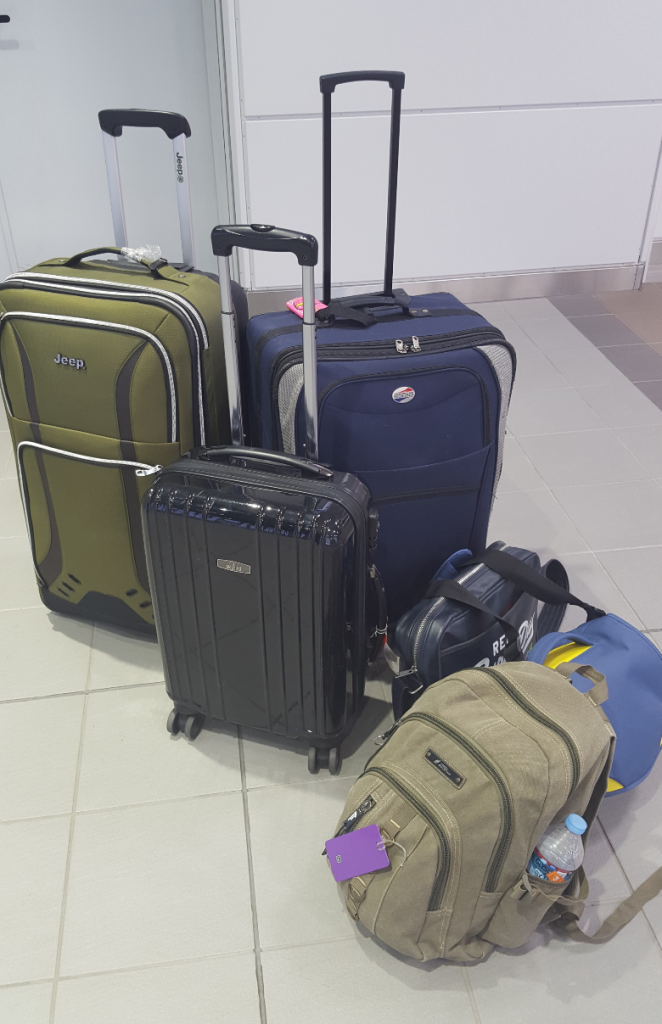 luggage waiting for its owners

The Japanese are renowned for their kindness, efficiency, and their desire to help. After dragging the luggage downstairs and over to the station office, I met a train conductor, who took one look at the amount of luggage I was grappling with and thought something was amiss.

I explained in English that my kids were still on the train that just left. Pointing to the excessive number of bags to back-up my story. Despite him speaking little English and my lack of Japanese, he understood and turned to his colleague to explain the situation.

The concerned look she gave me, I don’t think this kind of scenario occurred regularly. I had the boys’ passports in my handbag and showed them so they could see their names and knew who to look for.

Both disappeared behind a wall inside the office. A few minutes the conductor emerged and said, “Fraser and James?”

I nodded, greatly relieved. It seems they’d at least made contact with them.

“They will get off at the next stop and wait for the train back to Iiyama,” the railway conductor informed me in broken English.

“Only one problem,” he said smiling (almost apologetically I thought.)

He pointed at the large neon sign announcing the next train was due to arrive at Iiyama at 18:09. In another two hour’s time!  Apparently, not all Shinkansen trains stop at Iiyama station.

the next train arrives at 18:09 – taken half an hour into the wait

With little choice, I settled into the empty waiting room on the platform. A lone tourist with way too many bags! Comfortable seats, warmth, WiFi, and a PowerPoint under my chair to re-charge my almost drained phone meant I could comfortably pass the time.  This included messaging my friends at Nozawa, who were waiting for our intended arrival at 5 pm. We were to join them for a Japanese bar-b-q dinner, booked for 6 pm.

I advised my friends, “due to unfortunate circumstances beyond my control, we will not be making it for dinner!”

To make matters worse, because the boys were not going to be back until 18.09 the next shuttle bus to Nozawa was 18.55pm. 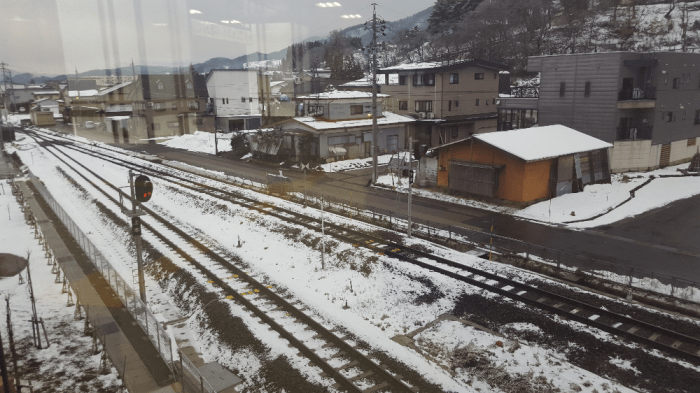 All I saw at Iiyama Station

The train arrives on time

At precisely 18:09 the Shinkansen pulled into Iiyama station and two slightly sheepish boys alighted.  Big hugs from mum and a reprimand, “hand your phones to me please – no arguments!”

Apparently, they had the best time at the other station. While waiting for the train to return them to Iiyama, they played in the snow, making the most of their slight change in plans.

Kids – they don’t worry as parents do!

“Great,” I thought as we travelled by bus to Nozawa. Peering out into the dark there was no countryside to see! When the bus stopped at Nozawa, we hoped we chose the right stop, closest to our lodge. The roads were snow-covered and we were not familiar with the town. Miraculously, Mr 18 managed to read the map and we negotiated our way to our accommodation, Kirakuso Lodge. (Kudos to Mr 18 for not getting us lost.)

It was 8 pm by this stage. Once checked in by our welcoming Japanese hosts, we made our way up the road to where our friends were staying at Lodge Nagano.  There were numerous pit-stops as my excited two jumped into the banks of soft powder on the side of the road (it was four years ago they’d seen snow in Perisher.)

Yes, it was fun but I’d had enough drama for one afternoon. All I wanted to do was see my friends and relax!

A roar of laughter greeted us as we slid open the lodge door.

Handing me a welcoming red wine, one of my friends (jokingly) admonished my boys for their actions.

“How could you put your mum through such an ordeal?”

It felt good to finally have a little support, but most of all to see friendly faces from Brisbane. It was all quite relaxing until my lads piped up saying they were hungry. The bento meal was about seven hours ago.

Of course, no restaurants would be open at this time of night for a feed!

A couple of lodge employees – including the lovely Bonnie (who happens to be the girlfriend of an old work colleague – small world right!?) kindly allowed us to raid the kitchen supplies. Peanut paste on toast our very un-Japanese meal for our first night in Nozawa!

Day one in Japan – already proving to be an interesting adventure!