My first visit to the land of the rising sun is imminent. Japan has been on my travel radar since my high school days when I studied Japanese in Year 8! As this was quite a few decades ago, why has it taken so long for me to visit?

Truthfully – I’ve no idea. I’d say too many other countries in between. But a couple of factors influenced the decision for Japan being the next family holiday destination. Two milestones were reached at the end of 2016. My eldest child finished year 12 and turned 18. Mum instincts told me these dual milestones means this could be my last holiday with him.

So where should we go?  Somewhere fun and family friendly preferably. A couple of friends with similar aged kids had booked to ski in Japan mid-January. Boom – destination decision made!

Nozawa Onsen is described as a traditional Japanese ski experience. Watch this space for post ski-trip review. According to the website, unlike other ski resorts Nozawa has many of their beginner runs at the top of the mountain. Can’t wait to try these and their numerous onsens.  And current snow reports indicate Nozawa is receiving a good coverage this season.

After Nozawa faced with so many choices of what to see and do and not wanting to overwhelm my tribe (and me) with constant travelling, I narrowed it to two cities: Kyoto and Tokyo. The old versus the new.

In Kyoto I have nothing planned, apart from the accommodation. I hope to drag the boys to visit a few historical sites and take in the culture of the old imperial capital. (Much to my kid’s disgust no doubt.) In Tokyo we’ll see the last of the season’s Sumo tournaments and test ourselves on a six hour cycling tour around Tokyo’s Bay area. Throw in a day to wander around at our own pace and we should get a decent taste of what Tokyo is about.  For something different, our Tokyo accommodation is a traditional Ryokan (Japanese Inn).

My three lads and I took off for a snow adventure in Australia to Perisher four years ago. It was their inaugural visit to the snow and my first back on the slopes in a long time!

The motley crew in Perisher

Sadly one of my lads failed to “enjoy” the Perisher skiing experience so has opted out of the Japan holiday. So we’re travelling as a tribe of three, not four.  Maybe less squabbles? One can only hope.

Last time “ever” on skis! And I’m not coming to Japan Mum

Japan – I’m just a little excited to finally meet you. And I’m looking forward to the cold. Brisbane you’ve been obscenely hot these last few weeks!

What are your Japan highlights? 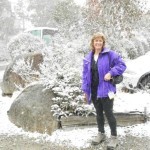 find me some snow – soon!