Home » Destinations » Thailand » The black, the white and the very colourful Chiang Rai

Things to do in Chiang Rai

Sharing a three-way border with Myanmar and Laos, the northern Thai province of Chiang Rai earned the notorious nickname – the Golden Triangle. From the 1920s up until 1959 when the Thai government banned its trade, opium was the Golden Triangle’s most prolific commodity. The region has since moved away from its infamous association as the centre of production of the ‘joy’ plant and drug smuggling replacing them with activities that sustain the local population with more socially acceptable commodities: tea, coffee, pineapples, and a few ‘intriguing’ cultural attractions.

You can visit Chiang Rai for a few hours as a day trip from Chiang Mai, the southern sister city of Chiang Rai. A four-hour bus ride along winding mountain roads will deliver you to the city that shares the same name as the northern mountainous province.  Or you can take the 90-minute flying option as I did on Thai Smile Airways from Bangkok, the morning after the end of the Australian Society of Travel Writer’s 2018 conference.

My excitement for my first visit to Chiang Rai must have been evident with my seat buddy, a local Thai fellow. He suggested we take selfies holding our Smile boarding pass. Apparently a popular custom with locals hoping to be featured in their in-flight mag.

Could I say no? 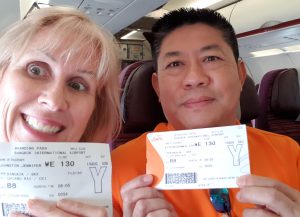 Chiang Rai on the banks of the Kok river has a history dating back to 1262 when it was declared the capital of the Lao-Thai Lanna Kingdom by King Meng Rai in 1262. The region has managed to retain its association with the Lanna culture while embracing a new artistic movement, as seen in these three places we visited during our short stay in Chiang Rai.

The White Temple or Wat Rong Khun as the locals refer to it, is a Buddhist temple built by Thai artist, Ajarn Chalermchai Khositphiphat. The temple’s unconventional exterior is impossible to miss as you pull up at the car park. Bizarre and eye-catching, if the creator’s intention is to draw the visitor’s attention, he’s succeeded. 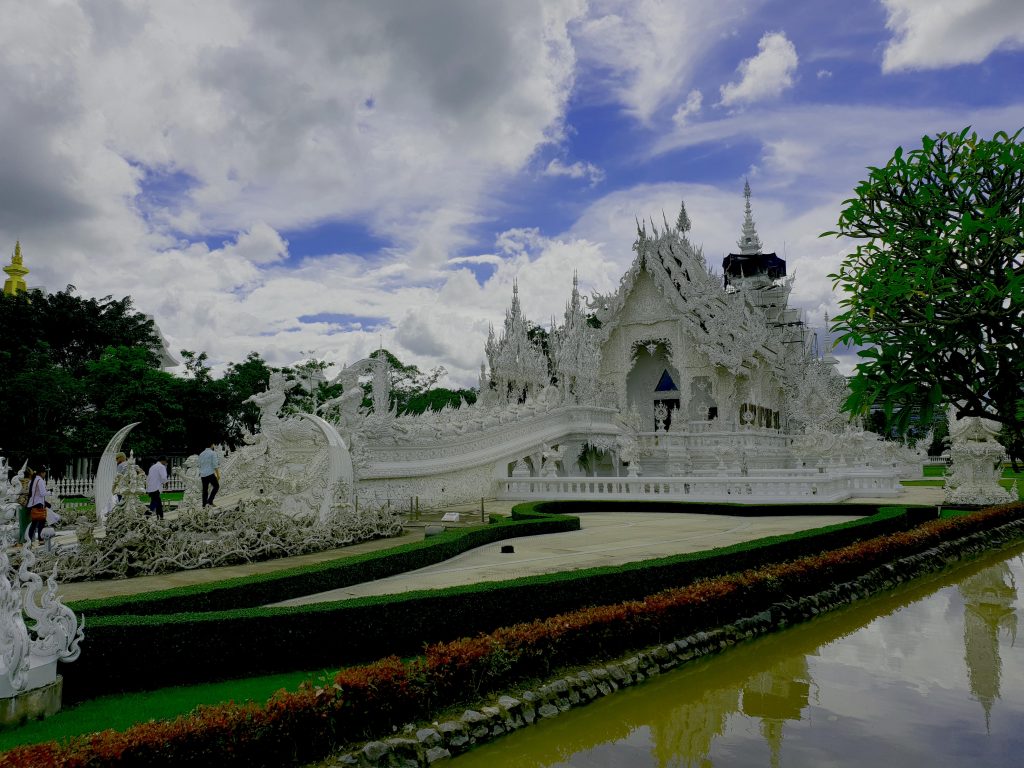 The main temple’s three-tiered roof is decorated with Naga Serpents (creatures that are part-human, part snake-like.) If the starkness of a white exterior wasn’t enough, the outside structure is covered in mirrored tiles, bedazzling under the sun. According to the artist, these tiles are a symbol of Buddha’s wisdom that shines throughout the universe.

To add even more “WOW” factor the neighbouring water feature reflects the temples’ discerning shapes adding to the overall spectacle. 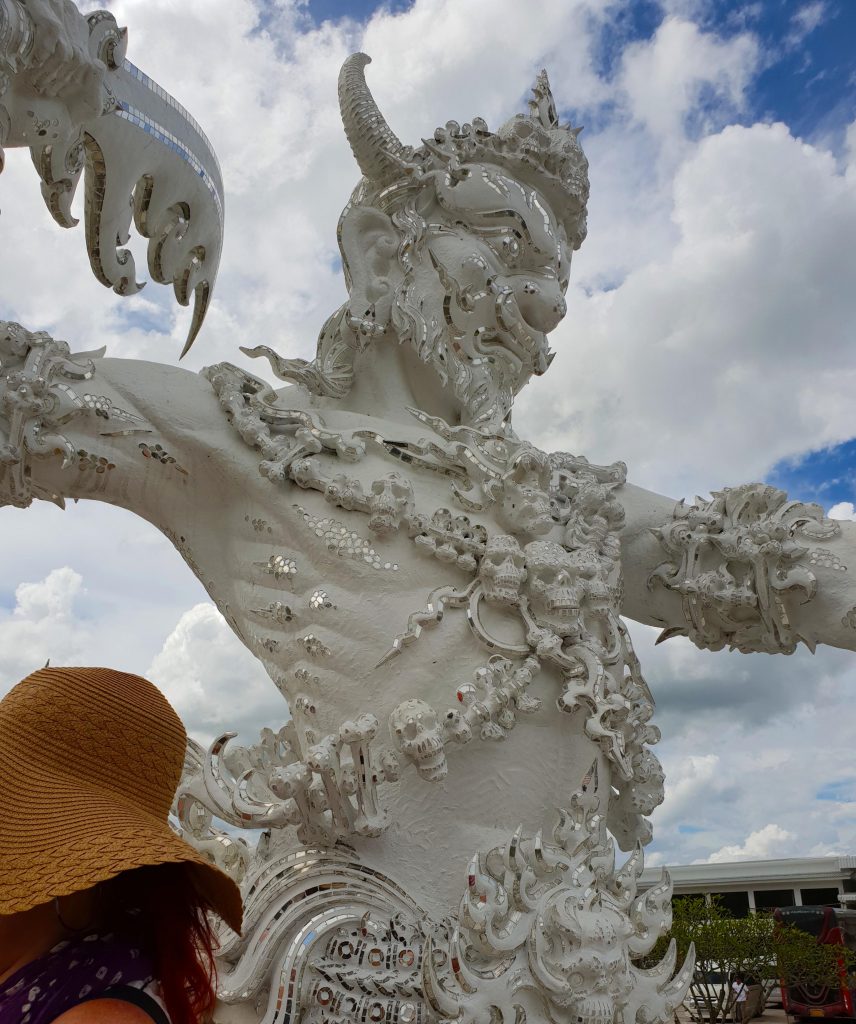 Mirror tiles add to the bedazzlement of these sculptured figures

The project which began in 1997 is self-funded by the artist Ajarn Chalermchai, to ensure he has complete creative freedom to build whatever he desired.

“I want to break away from any influence of arts of any periods,” he explains. “That is why I need to commit my life to the project.”

To ensure work is completed according to his design and exacting standards, Ajarn Chalermchai is on-site at the temple every day, making alterations and additions to the nine buildings that make up the complex. He estimates it will take 90 years to complete his project and will engage others to complete the project after his death.

There are symbolic reminders everywhere. To reach the main temple you must pass a bridge where hundreds of macabre hands reach out from the ground (symbolising hell.) 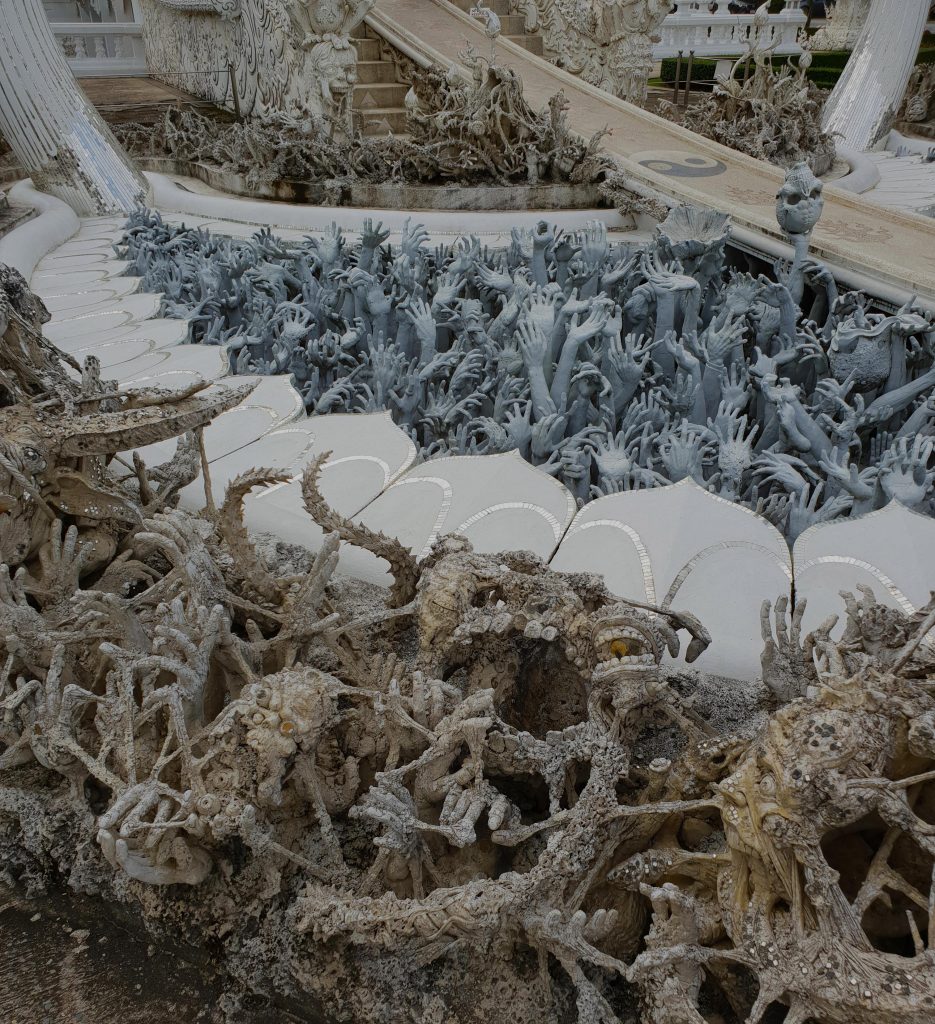 Inside the main hall (where photos are not allowed) the walls are painted with modern-day icons including Superman, Spiderman, The Matrix characters and Darth Vadar intermingling with flames. Ajaran’s message: everyone goes to hell despite their superpowers. Ajarn painted Superheroes to show there are no heroes in our world.

Take your time to observe the images and absorb the message of peace and happiness that lie behind them before leaving the temple. Wander around the gardens, to observe more absurd ideas from the artist.  Vicky our tour guide points out the “most beautiful” toilet in Thailand. An ornate gold building, framed by manicured gardens, I initially thought this may have been another temple. I can’t turn down the chance to try the “golden toilet.” And I can tell you, it’s pristinely clean and free! 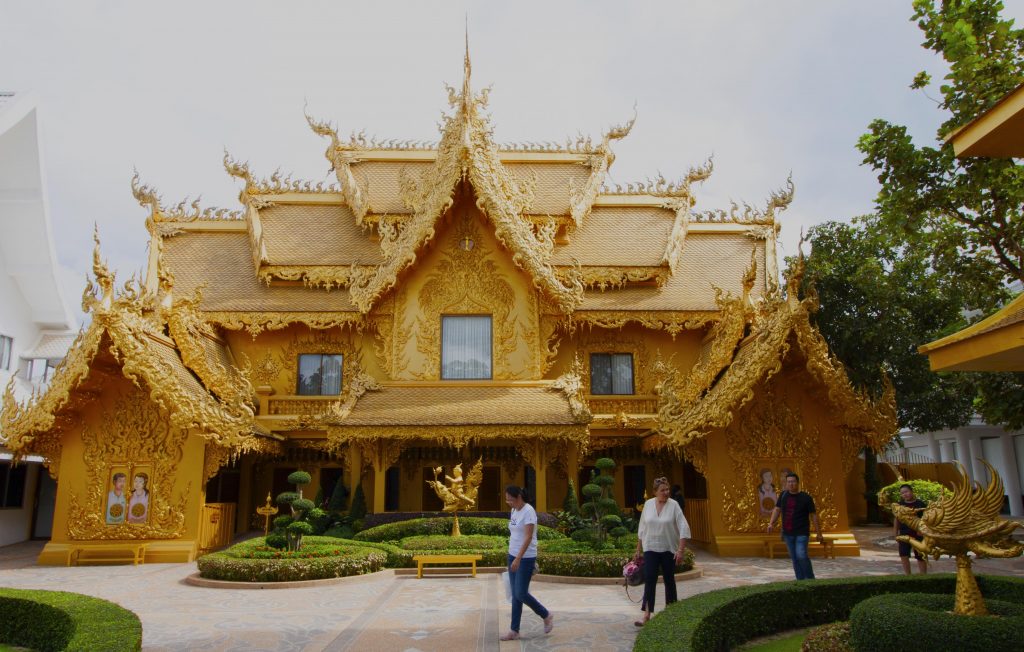 the golden toilet block at the White Temple 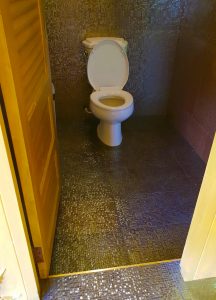 just not a gold loo!

The White Temple is open every day from 6:30 am to 18:-00.  50 Baht entry fee, And because it is a temple, remember to wear something that respectfully covers your shoulders and knees.

Half an hour from the White Temple is a polar opposite colour experience, the Baan Dam Museum, known as Black House. The grounds are the last residence and resting place of local Chiang Rai born artist Thawan Dunchanee. There are 15 buildings of various shapes and sizes dotted around the private gardens. Made of wood, glass and concrete they all house artwork by the devout Buddhist.  The building designs are influenced by traditional Burmese, Tibetan and local Lan Na architectural styles. Where the white temple presents a pristine almost pure experience, the Black House portrays the darker side of life, the hell and suffering of Samsara—the cycle of life, death, and rebirth. This is where Duchanee lived and created ‘art’ for 36 years when he wasn’t travelling. He died in 2014 at the age of 74. The foreboding exterior colour may be dramatic but the collection of paintings, sculptures, animal bones, snake skins and carvings found inside are eclectic. Some are meant to startle (and they succeeded with me.)

Before entering the Main Sanctuary Hall, look up at the steep gables with metal tips that look like sword blades. Three gold cone-shaped objects perch precariously on the roof, breaking the sea of black. 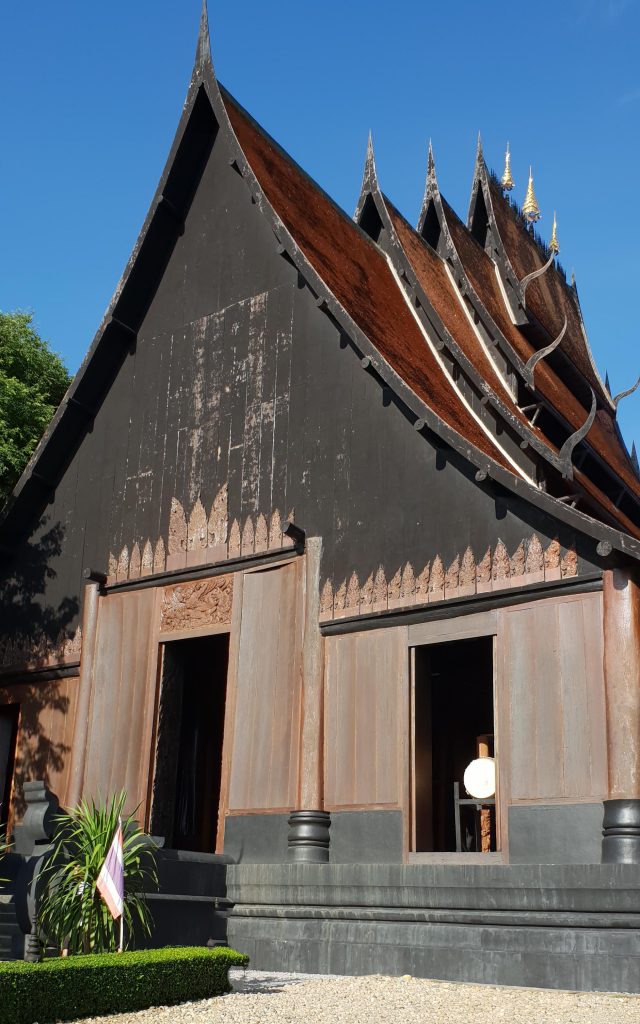 Inside are wooden tables laden with crocodile skins stained black, skins of snakes, paintings and chairs that wouldn’t look out of place on a Game of Thrones set. Not sure what the table filled with penis shaped objects was about, but there’s another collection of objects that conjures questions as to its inclusion! 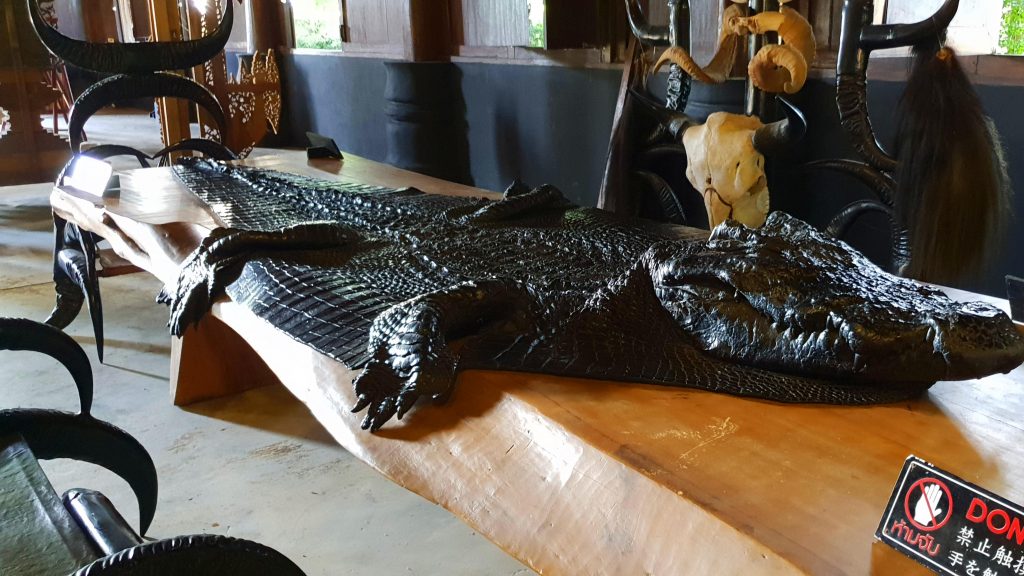 Vicky explained all the taxidermic animals on display at Baan Damm supposedly died of natural causes. Is that meant to make us feel any better about this morbid collection? And I wasn’t sure if it’s something to gloat about or be shocked by, but the Black House is said to have the world’s largest collection of animal remains made into furniture. Seeing all the horns, skins and animal horns, I kept thinking, I hope Vicky’s information is accurate and these animals truly died from natural causes and nothing sinister caused their demise. 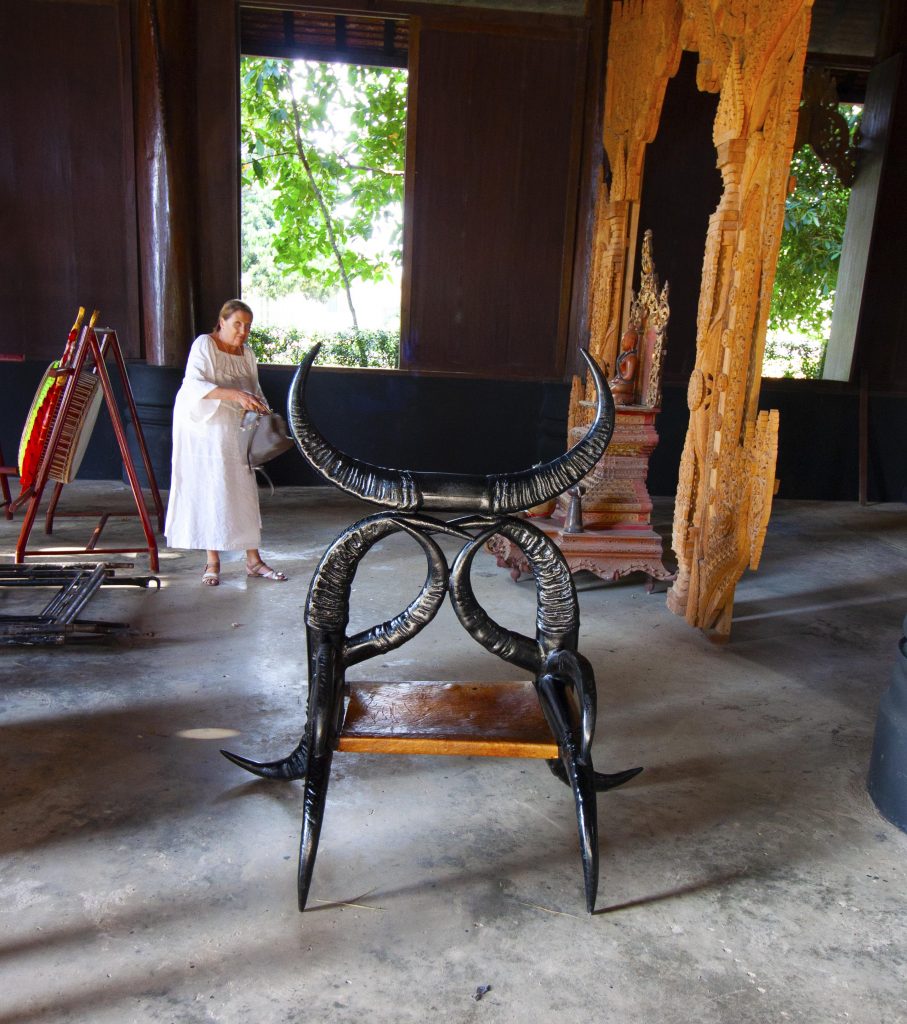 With closing time only half an hour away our group scooted around the grounds looking quickly at various buildings, some it seemed were not open to the public, or maybe they closed them early? Below one building was an extensive array of animal antlers, horns, skulls, and animal skins, in symmetrical rows, covering numerous long tables and the building’s exposed beams. 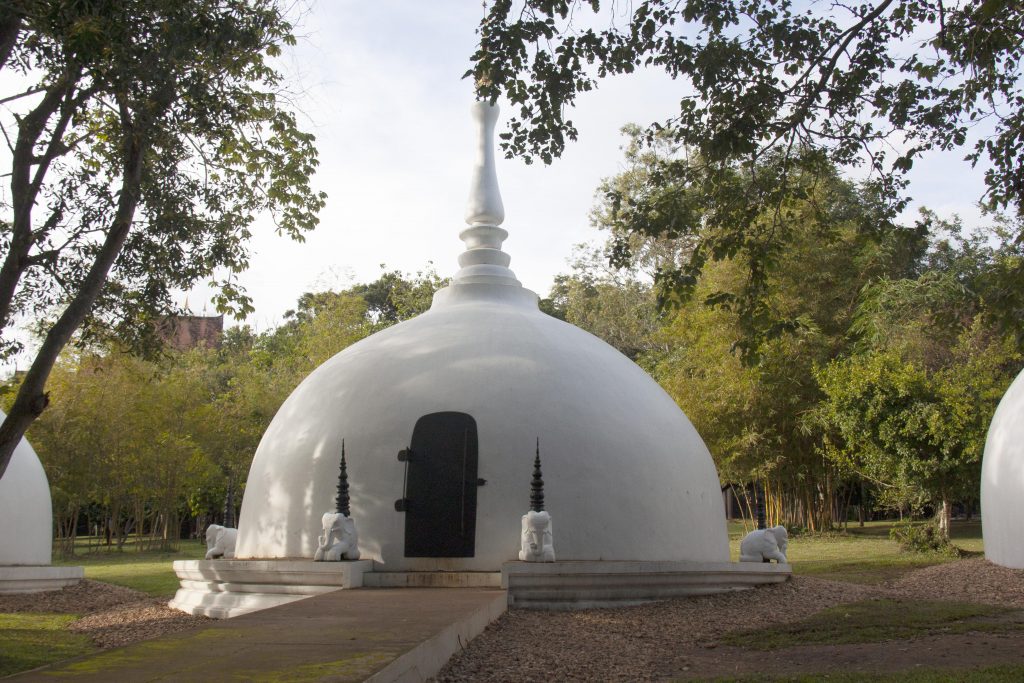 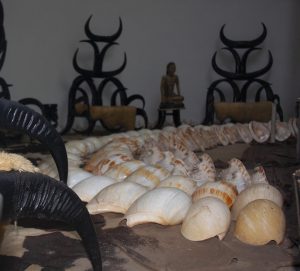 Inside the white domes

And the nearby black submarine shaped structure with round glass portholes, sinking into the sloping ground was so left field, I couldn’t help thinking if this was where Duchanee slept, no wonder his ideas were out there! 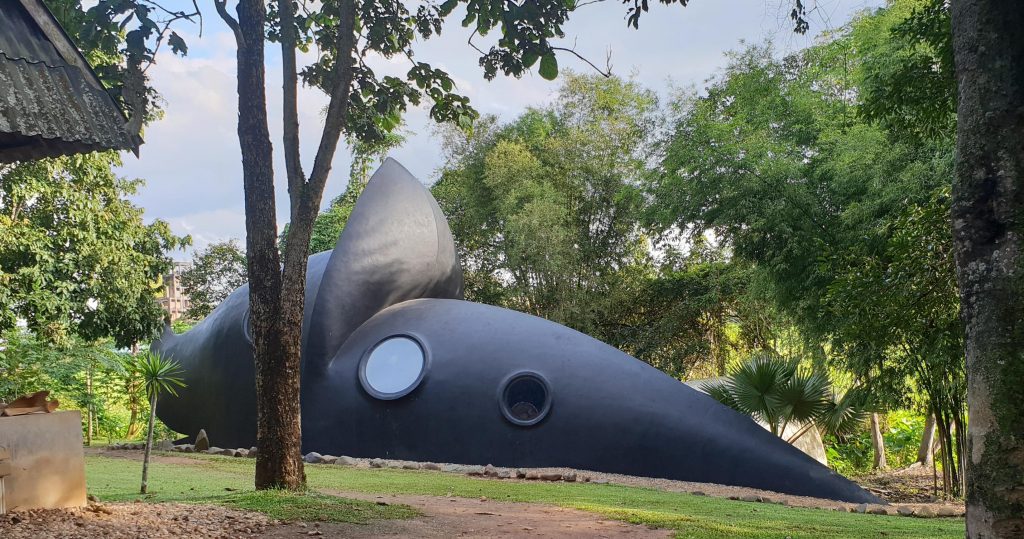 One of the foundations of Buddhism is the inescapable impermanence of life. Maybe Duchanee’s VAST collection of deceased animals was a reminder of that principle, admittedly in a rather macabre fashion. But as with all artists and their work, interpretation requires an open mind.

Tip: If you’re offended by animal remains, taxidermy and phallic objects this may not be the place for you.

The Blue Temple or Wat Rong Suea Ten is in the district of Rimkok a few kilometers outside the city. Completed in 2016 it is one of Chiang Rai’s newer Buddhist temples and is much smaller in size than the White Temple and Black House. Rong Suea Ten in Thai translates as ‘house of the dancing tiger’ a reference to the region around the temple, where tigers once roamed freely. 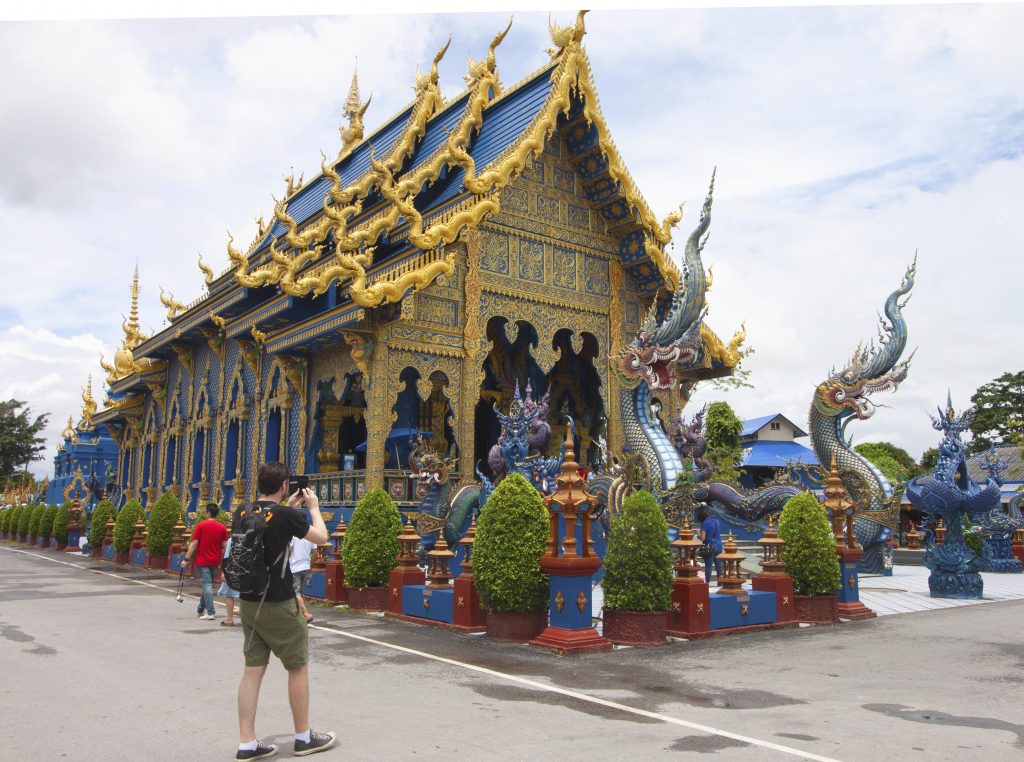 The striking indigo blue overlaid with gold is eye-catching. The blue represents Buddha’s Dharma (the limitless heights of ascension) and is a colour the Thai people associate with wisdom, purity and healing. Designed by Phuttha, a student of the artist Chalermchai  Kositpipat, who built the White Temple, there are noticeable influences carrying over from Kabkaew’s time working at the White Temple.

The monastery and pagoda were built on the ruins of an ancient temple, abandoned around 100 years ago.  Two spectacular carved colourful naga serpents guard either side of the monastic hall’s entrance. Inside the main hall in an alcove is a large statue of a sitting White Buddha surrounded by filigreed columns. The right-hand rests on his knee, fingers touching the ground, to represent Buddha’s moment of enlightenment. 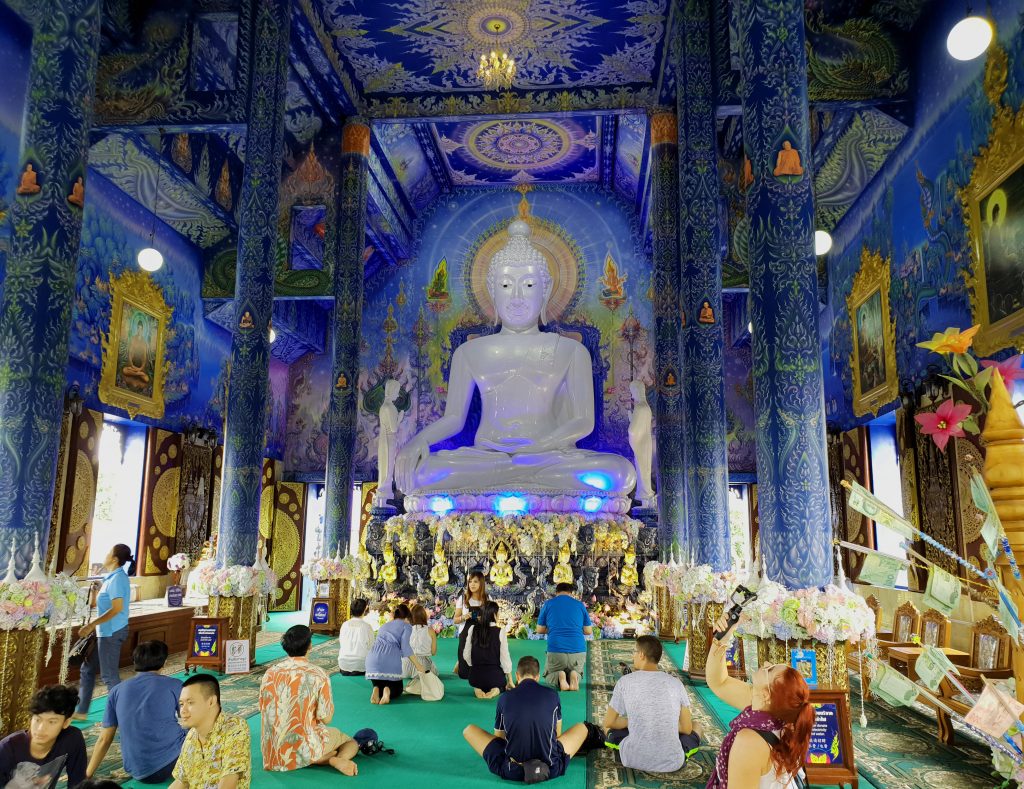 The White Buddha inside the Main Hall of the Blue Temple

Unlike the White Temple, visitors may take photographs of the temple’s interior a kaleidoscope of mesmerising colours, glittery gold and images. 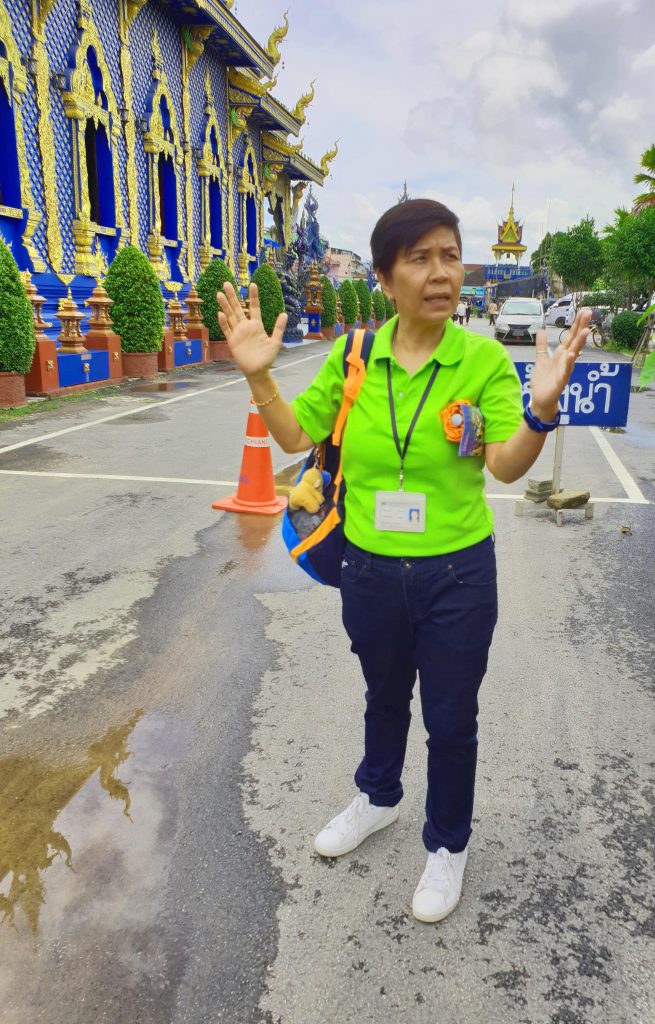 Our wonderful guide Vicky explains another fact to the group

These are just three of the many attractions found in and around Chiang Rai. There are other reasons to make the three-hour drive from Chiang Mai or take the short one hour flight directly from Bangkok, (food – where to eat, the outdoor parks – where to play) but I’ll cover those in another post.

If you’re after a serene experience, look at A Star Phulare Valley away from town in the peaceful Thasud Subdistrict about a 20-minute drive from the centre of Chiang Rai. 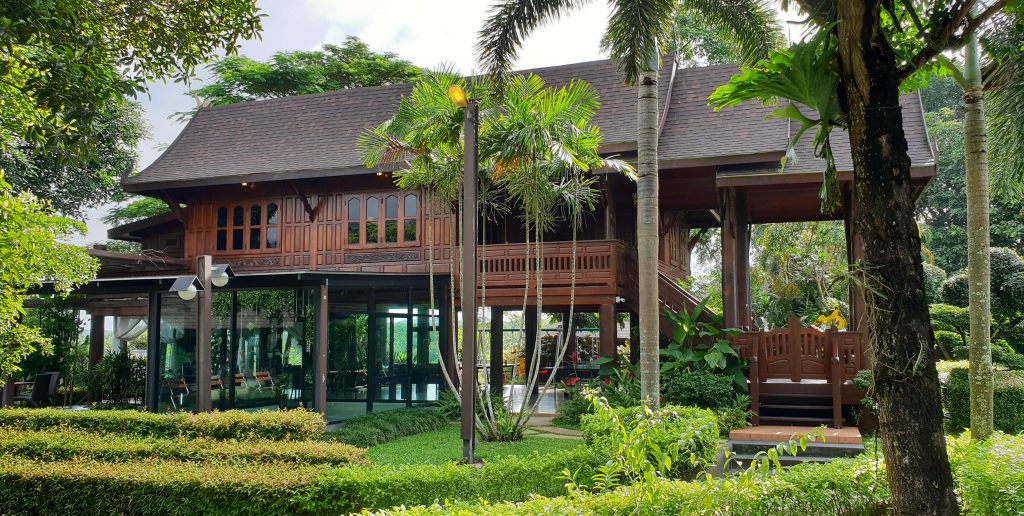 Thank you to Amazing Thailand, Thai Airways Tourism Authority of Thailand and the ASTW for a fabulous opportunity this travel writer will never forget.  And thanks also to Jac, Suzie, Craig and Deb for making me feel a part of the ASTW family on my very first ASTW famil!