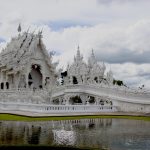 Things to do in Chiang Rai Thailand and temples go hand in hand but Chiang Rai’s three main temples take quirkiness to another level. Sharing a three-way border with Myanmar and Laos, the northern Thai province of Chiang Rai earned the notorious nickname - the Golden Triangle. From the 1920s up until 1959 when the Thai government banned its … END_OF_DOCUMENT_TOKEN_TO_BE_REPLACED