Home » Destinations » What’s not to love in Seattle

Seattle is a city that pulses with an energetic vibe. And that’s not just because it is the headquarters for two of the largest corporations in the world: Amazon and Microsoft.  Nestled in between two imposing mountain ranges – the Olympics and the Cascade – which help to bring the precipitation Seattle is renowned for, this city is blessed with good looks as well as the creative outlook.

The backstory to why Seattle

How did I win a return flight to the USA at my first ever IMM in Sydney, February 2018? I’ve added the story to the end of this post*. It was a case of serendipity and sheer luck. Much gratitude to VisittheUSA and Delta Airlines for the opportunity and Visit Seattle in helping me choose Seattle as my USA destination.

Timed for early December for many reasons, one of them to coincide with meeting my friend’s daughter on her way home to Aus after studying at an East Coast Uni. I also wanted to fit in a side trip to Vancouver (Canada) to see a friend – so close to Seattle, why not?!

My highlights of Seattle as a first-time visitor

There are so many more experiences in the largest city in Washington State, but for this post, I’ve written about five as an ‘intro’ to cosmopolitan Seattle.

We stayed in the five-star Fairmont Olympic Hotel on University street in downtown, a convenient location to take a stroll around the city the afternoon I arrived (best way to shake off jetlag after a long flight from Brisbane.) The wide city streets are laid out in an orderly grid pattern, with cross streets names by number, making it easy to work out where you need to be. University Street spills down to a waterfront with stunning views to the imposing Olympic and Cascade mountain ranges. 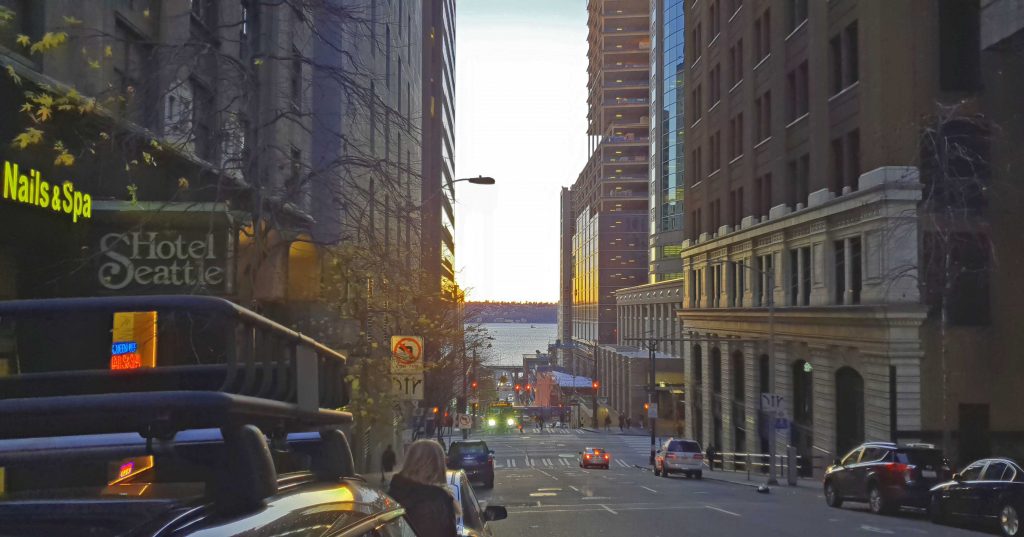 Downtown Seattle views to the waterfront

Rain is a common denominator in Seattle. Anyone who’s watched the popular Seattle based TV show Frasier knows an umbrella was Frasier’s constant companion (as well as his brother Niles!) Its meant to rain nine months of the year in Seattle but thankfully the rain stayed away when we were visiting. On our second day in Seattle, we took advantage of the fine weather and headed to the cultural sector via the inner-city train (two stops, takes only five minutes and yes you can easily walk it as we found out on the way back!) I used my City Pass (for $89 USD you can access up to five popular attractions) to enter the Space Needle Built for the 1962 World’s Fair, the famous Jetsons-esque lanmdark has recently received a major refurbishment ($100 million spend completed in August 2018.) The observation deck is 184 metres above the city and on clear days like the one we were experiencing, has incredible 360-degree views of Mount Ranier, across Puget Sound to the Cascade and Olympic mountain ranges. The revolving glass floor on the level underneath the Observation Deck gives a unique perspective on the city below and according to project architect Alan Maskin, is the first of its kind in the world!

Do the virtual reality bungee jump on the ground level, if only to watch other people’s reactions while you wait for your turn.

The Chihuly’s Garden and Glass exhibition

In the shadow of the Space Needle, this building contains a maze of galleries with an outdoor garden showing off an eye-popping collection of glass installations created by Pacific Northwest glass artist, Dale Chihuly. Maybe the rest of the art world knows the work by Chihuly, I, on the other hand, have been living in an ignorant bubble (not a glass one lol!) Chihuly’s glass sculptures are mesmerizing with his use of vibrant, vivid colours. It’s no wonder he’s received awards and doctorates for his works. Moving from one gallery to the next, each exhibit is an unexpected dazzling surprise. I fell in love with his work and I’ll be on the lookout for future Dale Chihuly exhibits.

The Museum of Modern Pop (MoPop) houses an eclectic collection of personal memorabilia – science fiction and rock ‘n’ roll – originally owned by Paul Allen, co-founder of Microsoft who passed away in 2018 in his hometown of Seattle. Other galleries are devoted to the talents of Seattle’s local musicians Jimi Hendrix, Nirvana, and Pearl Jam. 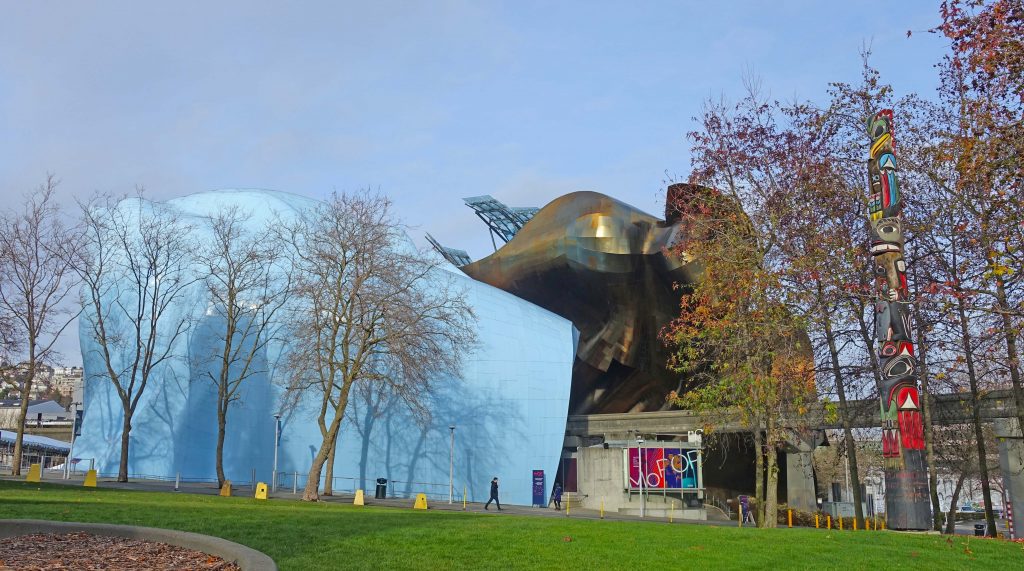 The “Experience Music” section of MoPop has interactive exhibits where visitors can strum electric guitars, bash out a few beats on a drum kit or experiment with creating your own loops. There are sound booths where you can have your own private jam session. Closing the door behind you so no one can hear is a good option, especially if you’re anything like me with no musical ability whatsoever!

Seattle based sound sculptor Trimpin’s creation If VI was IX (a reference to six guitars working together to create one chord) is located on level two. This sculpture, a tower of over 500 various musical instruments (mostly guitars) snaking its way to the ceiling is very impressive. Imagine a tornado hovering over a guitar factory, sucking the contents upwards into a vortex which is then forever frozen in time. Very cool, as is the video that explains its design and showcases various musical arrangements.

If VI was IV sculpture in MoPop

The horror film history gallery with its eclectic collection of memorabilia from many well-known films like the Shining and the Terminator makes an interesting diversion from the musical exhibits.

Operating since 1907 the building adjacent to the waterfront is a is a multi-level maze of farmers’ markets, food, and craft stores. It’s hard to miss the neon sign announcing the market. Interesting fact, the sign and the clock fitted in 1927 were one of the first pieces of neon to be installed on America’s West Coast. These markets were one place I kept returning to during my stay. The first afternoon for a look-see and a few taste tests including some mac n cheese from Beecher’s Handmade cheese (Oprah’s favourite apparently.) A few days later we returned to experience a two-hour foodie tour with the delightful Shelby from Savor Seattle

Worthy to mention: try and catch the fishmongers famous fish throwing on the corner at Pike Place Fish Co. as you walk past the bronze statue of Rachel the pig (a piggy bank which raises funds for low-income locals.) The fish throwing is a popular spectacle and they know how to draw a crowd. Don’t miss the Daily Dozen Doughnut Company not far from the pig and say hi to Julie who has perfected the art of melt in your mouth cinnamon doughnuts. (I went back three times and my mouth still waters thinking about them.) Being a chocoholic, I loved Chukar Cherries – delicious chocolate-covered cherries proudly made from cherries grown in the Pacific North West.  Friends and family were gifted with packets of these sweet treats for Christmas. 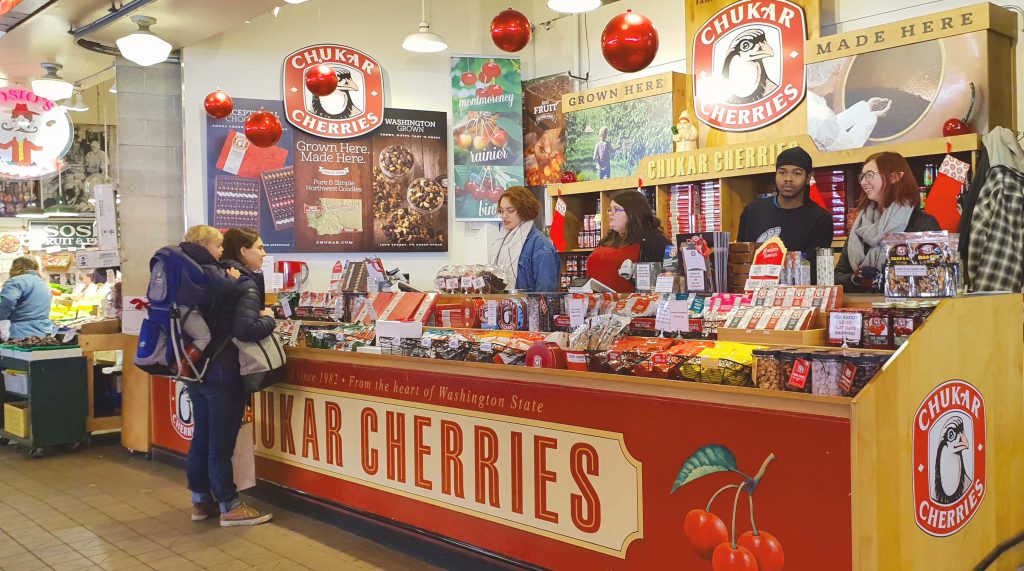 Nicknamed the Emerald City in 1982, Seattle has many green spaces close to the city heart.

Discovery Park has walking trails (paved and unpaved) leading to a lighthouse on the western side. Close to downtown the 534 acres (two million square metres) expanse of greenery is Seattle’s largest park with stunning views over the Puget Sound, Mount Ranier and the Olympics.

Olympic Sculpture Park is by the waterfront. Stroll alongside Elliott Bay’s eastern shoreline on the pedestrian pathway to Jaume Plensa’s ‘Echo’ sculpture, a 14-metre high waterfront feature looks out over the Puget Sounds towards the Olympic Mountains. The tall white face sculpture is named after a nymph from Greek mythology and is best appreciated on the water (we took an Argosy Harbour Tour included in our city pass )

Washington Park Arboretum (entrance fee applies) on the shores of Lake Washington is a 230 acre (930,776 square metre) park hiding a Japanese Garden and Botanic Gardens with wetland areas. Kerry Park is a small park located on the south side of Queen Hill and a great outlook over downtown Seattle

For four nights I stayed at the Fairmont Olympic Hotel in the heart of downtown. This elegant hotel is a five-minute stroll to the Pike Place Market (and those doughnuts!) The hotel and its 450 rooms received a $25 million dollar refurb in 2016, revamping the suites with a clever mixture of modern with old-world charm.

The Georgian dining room at the Fairmont Olympic Hotel

After Vancouver and Leavenworth I stayed at the Maxwell Pineapple before flying home. This colourful, funky hotel was a five-minute stroll to the Space Needle (seen from my window) and close to the city’s attractions. With quirky pineapple touches throughout the hotel, I felt at home as I’m from Queensland, the state with pineapples as a logo! And the bed was so comfortable I didn’t want to get out of it the next morning. Or maybe that was because I was reluctant to leave Seattle?

What are your favourite memories of Seattle? 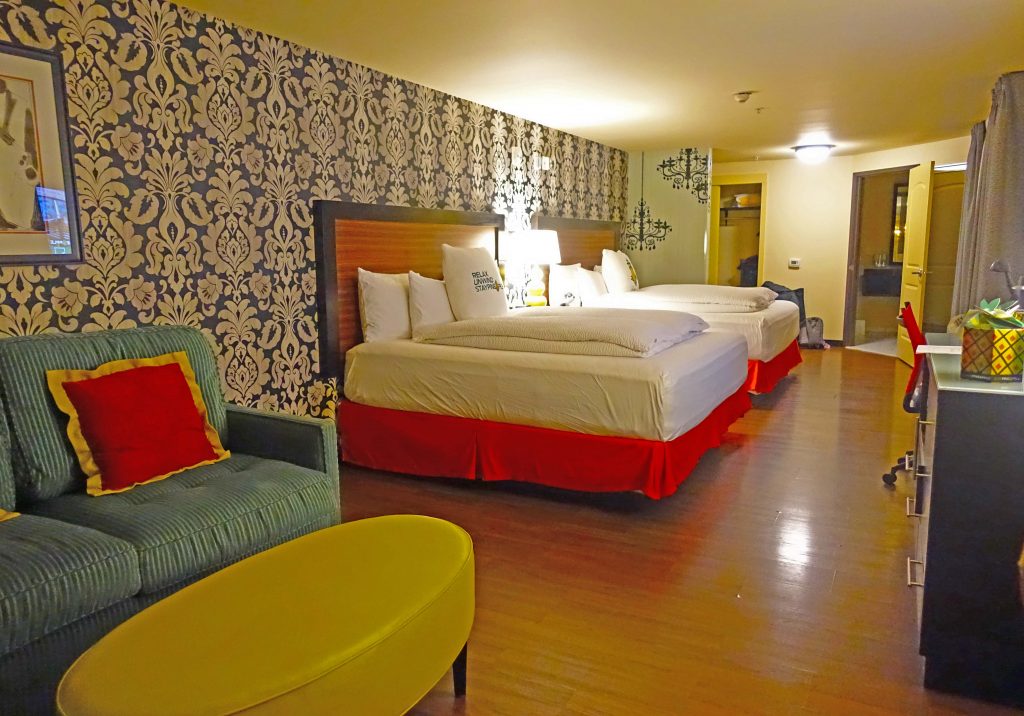 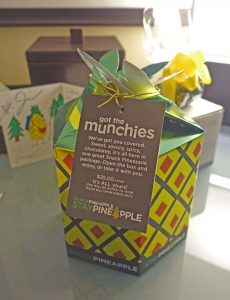 * Here’s the back story to how I ended up in Seattle:

February 2018 I was in Sydney attending IMM.  This was my first travel industry meet and I knew no one when I arrived. Looking like a stunned deer blinded by bright headlights at the breakfast hosted by Visit USA, the lovely Lyndey Milan said hi and we ended up doing the photo thing as you walked in.

Sitting down for breakfast our host, entertainment guru Richard Reid (yep same guy who recently won Channel 10’s Celebrity get me out of here) reminded everyone to place a business card in the bowl for lucky door prizes. Lyndey and I had forgotten, so we quickly left the table to hand over our cards. Within five minutes of sitting down to breakfast, Richard announced the first prize to be drawn was a return economy airfare to the USA with Delta Airlines. He put his hand in the glass bowl filled with business cards and calls out my name!

Wow, what a way to start my first ever Industry meet.

At IMM I met people from Visit Seattle who sold me on Seattle as a destination. They said it was a fun city, full of creatives, green parks, a vibrant live music scene, and diverse culinary choices. It’s also conveniently close to many national parks, hiking being my new activity of choice after my Japan incident.  And it was somewhere I hadn’t been to before.

Seattle ticked so many boxes.