Coral planting getting involved and making a difference

You’ve heard the saying the best way to help the environment is by cleaning up your own back yard.  Castaway Island, a small private resort located in the heart of Fiji’s beautiful Mamanuca group of islands are taking that mantra on board working on coral planting as one of their commitments to reef conservation. Part of an OZONE* conservation initiative and recognition that for change to happen you can’t bury your head in the sand (pun intended!) During a visit to Castaway Island late last year, I was lucky enough to be in a small group with Kolini Vulaono (Koli), the island’s Environment Officer learning about and being involved in coral planting. 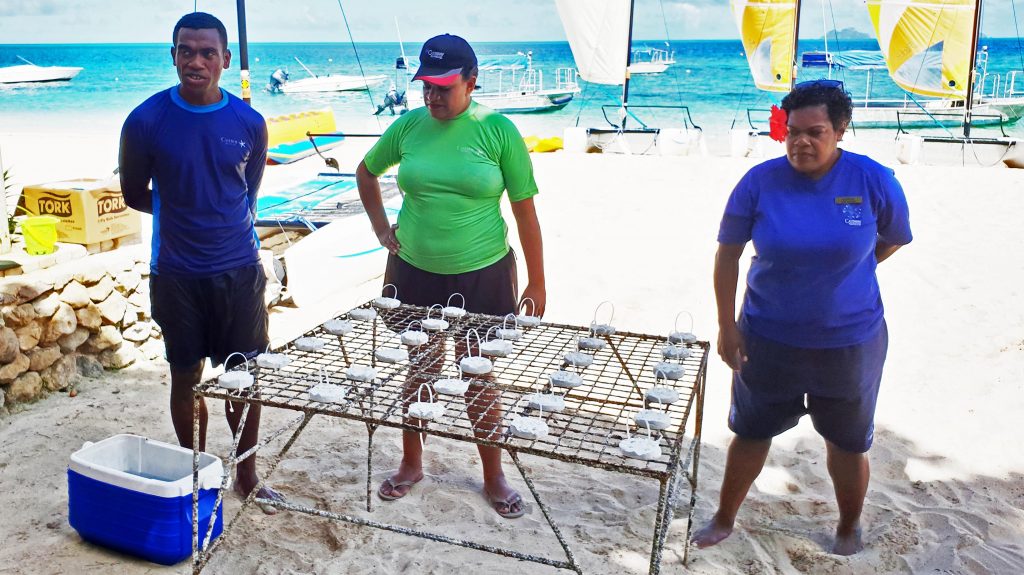 Changes in our marine world

The statistics are alarming. Just over 60% of the world’s reefs are struggling to stay alive. They’re being adversely affected by climate change, overfishing and pollution. You’d have to be living on Mars to not have heard about the overuse of plastic, the impact it’s having on marine creatures and the various messages about what we can do to help reduce the plastic waste ending up as swirling masses of garbage patches in the Pacific Ocean.

Reading and hearing about the damage is one thing. But seeing it first hand is confronting and disturbing. Around 10 years ago I remember holidaying in the Mamanucas and snorkelling around various reefs close to the islands I was staying at. The resplendent arrays of coral colours were stunning, the vast varieties of fish, mesmerising. Forward to 2018, the coral reefs I’m snorkelling over have some colour but there are large bleached white sections, bereft of tonal variation. The coral no longer harbours abundant sea life. I see some fish gnawing away at the coral: cheeky little orange and white striped clownfish, sweetlips and a few parrot fish but not the massive numbers I recall from a decade ago. Ocean swimming at Castaway is a wake-up call to the harsh reality of the damage being caused to our marine environment.

What is coral bleaching

The many colours of coral we all ooooh and ahhhhh over are the result of marine algae [zooxanthellae] that live inside the coral’s tissue. When coral is stressed (triggered by heat and pollution) they expel the algae, leaving the non-coloured white skeleton behind. Without the marine algae, the coral effectively starves and dies. And where this occurs in large masses the consequences are dire. Marine life as an important part of the food chain and the future is bleak should we choose to do nothing about it.

As an islander (and the island’s environment officer) Koli has a vested interested in looking after his backyard. “Our goal is to grow a football-sized field of new coral around Castaway,” Koli says. [A football field is approximately 7,140 square metres.] The program was launched on the 8th June 2015 in conjunction with World Ocean Day. There was a massive setback in February 2016 when tropical cyclone Winston hit Fiji  causing widespread damage. “Most of the coral planted in 2015 was damaged either from the strong waves caused by Winston or from the bleaching activities as an after-effect,” explains Koli. But in true Fijian style, the Islanders struck back after the cyclone and re-built, continuing to work on monthly coral planting. Koli told us in late November they had successfully covered around 1,200 square metres – just over one-tenth of the targeted football field.

For our planting experience with Koli, we’re using a branching coral species, referred to as Acropora. “The reason why we focus on this species compared to other coral species is they grow faster and they can stand more stress when exposed out of the water.” And reef checks around the waters of Castaway Island revealed this was the most common coral species.

Placing plastic disposable gloves on our hands, we’re shown how to gently pick up a fragment of coral by their base from the esky. 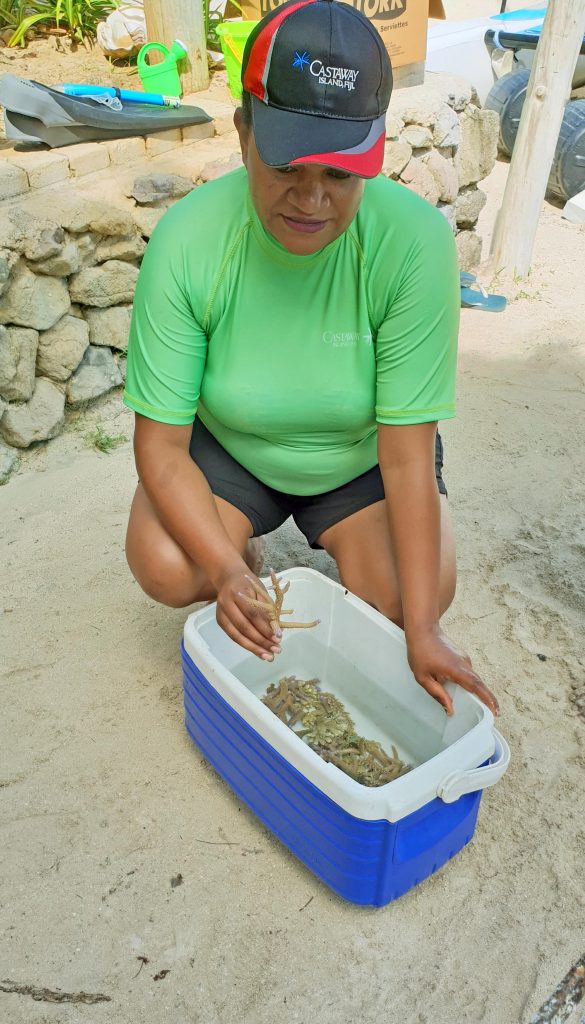 Each piece is carefully attached to a doughnut-sized disc made from plaster of paris. Using cable ties we attach the coral stalks firmly to the steel table specially designed by the engineers on the island to sit below the surface of the water.  “On this table, six months ago we planted 40 but only 10 survived,” says Koli. “So I have transplanted those 10 and recycled the table back for us to use.” The survival rate is usually around 50% but can vary according to the coral conditions and the ocean.

Jen, Marianne and Rachel getting involved tying Acropora coral segments to the steel table (thank you Donna for taking the pic)

The island has two coral plant sites, one out in front of the Sundowner Bar, near where we’re standing and the other almost five kilometres from the boat shed right at the reef drop off.  We clamber aboard the boat to the closest drop off point. Jumping into the water we watch as Koli with scuba gear disappears down below to locate the table in place. 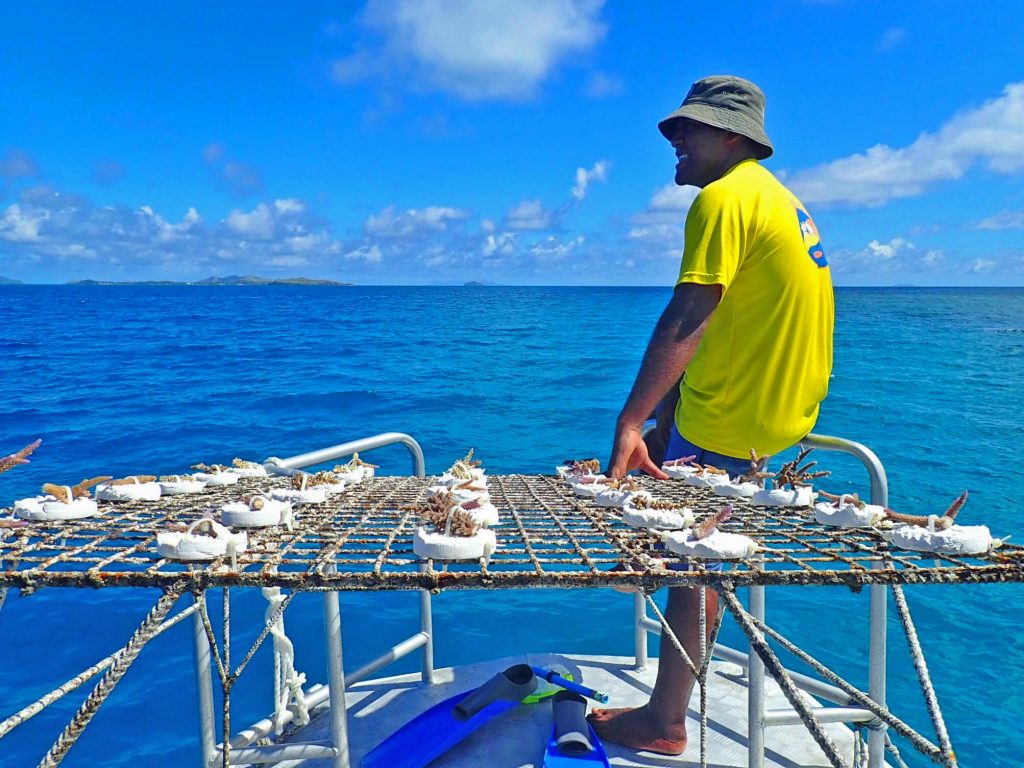 Its possible to dive down further and see the other table filled with round white cookies, doing their thing and regenerating. 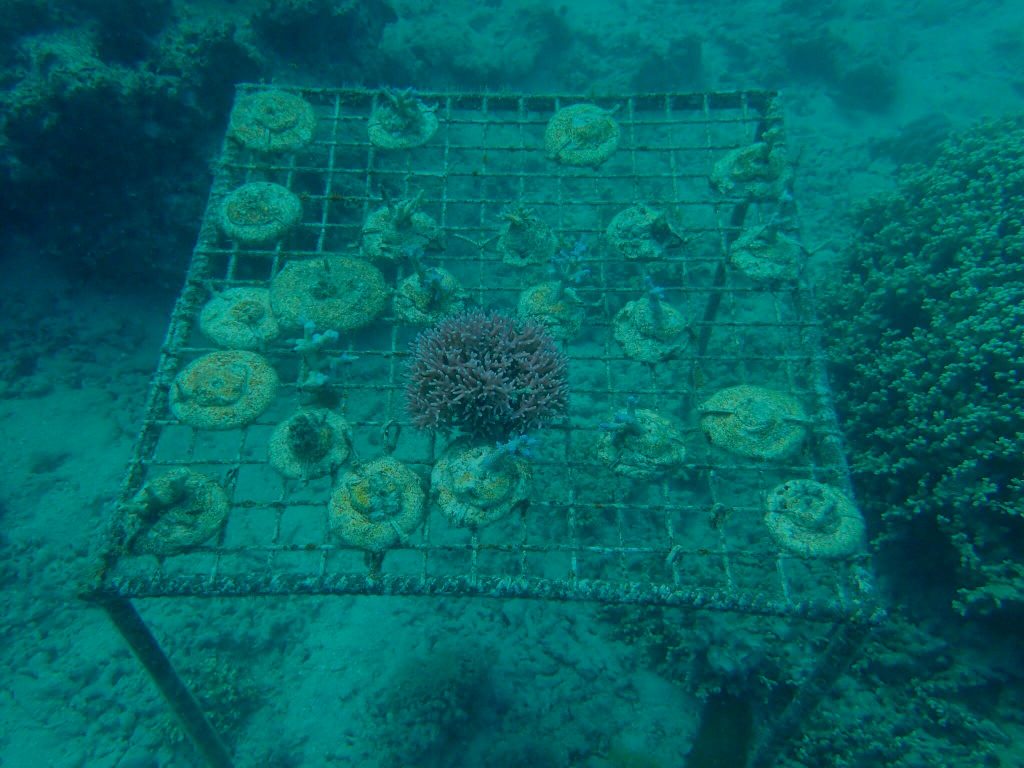 Like a hovering gardener, you wish your little coral babies the best and hope they are one of the 50% that survive and go on to do greater things for the future of marine life around this stunning island.

As someone who hopes to enjoy our oceans for many more years and for my sons to do the same, let’s do what we can to be aware of plastic, the impact of climate change and wherever possible get involved in programs like this one.

It begins with one person.

* OZONE (Outrigger’s ZONE) is a global conservation initiative established to protect the health of coral reefs and the oceans surrounding the beach destinations of Outrigger Resorts.

The writer travelled as a guest of Outrigger Resorts and all opinions expressed are her own.