I have hiked various trails inside World Heritage-listed Lamington National Park, including traversing the famous Border Track a month before the destructive bushfires tore through the Binna Burra side of the Park in September 2019. Twelve months later, I returned to the Gondwana Rainforest to check in on my childhood treasured paradise.

This is an extract from a long-form feature story I wrote during 2020. It was published in the summer edition of Wild Magazine #178 and I will put a link to the PDF of the full story at the end of my post.

On Friday the 6th of September (2019), the air was dry and hot on Binna Burra Mountain, the humidity sat at a miserly eight percent. The usually lush forest surrounding the heritage-listed Binna Burra Lodge was parched. Volunteer fire crews had been battling spot fires burning since August 31st after teenagers thoughtlessly discarded cigarette butts into the dry tinder. By mid-afternoon the winds from the west-northwest gusting up to 90 kilometres an hour, fuelled a fireball that rushed down the range, moving a staggering four kilometres in 10 minutes. Locals described the sky being an eerie shade, an apocalyptic mixture of light purple and dusty orange. Ash tumbled from its inky depths, swirling, spinning, scattering on the houses and rainforest below.

When the staff working at Binna Burra Lodge felt the heat blow up the valley, at 3.30 pm they made the call to fully evacuate the lodge, which was 100% occupied. Staff who lived locally had evacuated earlier in the morning to be with family and friends, ready to defend their properties.

By Saturday,18-metre-high flames ripped across the tops of the bone-dry eucalyptus trees in Beechmont, a small mountain hamlet located between the Lamington Plateau and Mount Tamborine in the Gold Coast Hinterland. Fires continued to burn in multiple areas around Binna Burra and down the Numingbah Valley towards Springbrook. Fire trucks were unable to access Binna Burra because of fallen trees. Planes dropped water from the air. The wind picked up momentum on Saturday night and by Sunday morning, Binna Burra Lodge and eleven homes in the Beechmont community were destroyed.

On Sunday morning a Greenpeace helicopter flew over Binna Burra, landing near Groom’s Cottage which survived intact. Nature tour guide Lisa Groom and her father Tony Groom, one of three sons of original Binna Burra owner Arthur Groom were the passengers. They made the solemn walk up the road towards the Main Lodge. The stone chimney was the only surviving structure where the lodge had stood for 86 years. Some sections of the ashen rubble were still smoking. Greenpeace unfurled a banner across the lawn in front of Groom’s Cottage. The simple message: “Climate Emergency.”

The historical and much-loved Binna Burra Lodge was the first tourism structure to be destroyed in the extraordinary 2019 Australian bushfires, which burned across the country on an unprecedented scale.

(According to ABC News between September and March more than 12.6 million hectares across Australia burned.)

The essence of forest bathing

Clouds hang low in the mountains shrouding the jagged peaks of the Scenic Rim in a misty veil. Senses are stirred. Memories, too. Childhood memories. 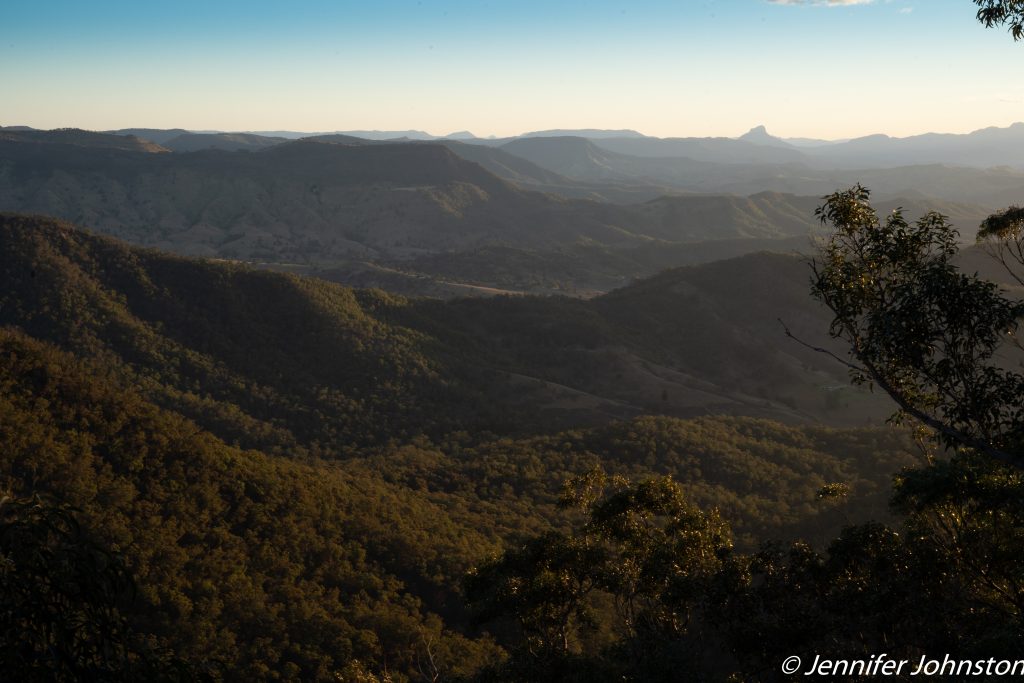 Looking out from Python Rock in Lamington National Park

My childhood was interspersed with long walks in nature. They may not actually have been far in distance, but on little legs and with a short (ish) attention span they felt long. I have memories of family adventures. My parents, the initiators, my two brothers and I the reluctant tag-alongs. Growing up in Brisbane, we explored trails on Mount Tamborine in the Gold Coast hinterland, wandered through Mary Cairncross Scenic Reserve near Maleny before looking out over the craggy peaks of the Glass House Mountains, and took Sunday morning strolls through D’Aguilar National Park close to Brisbane. 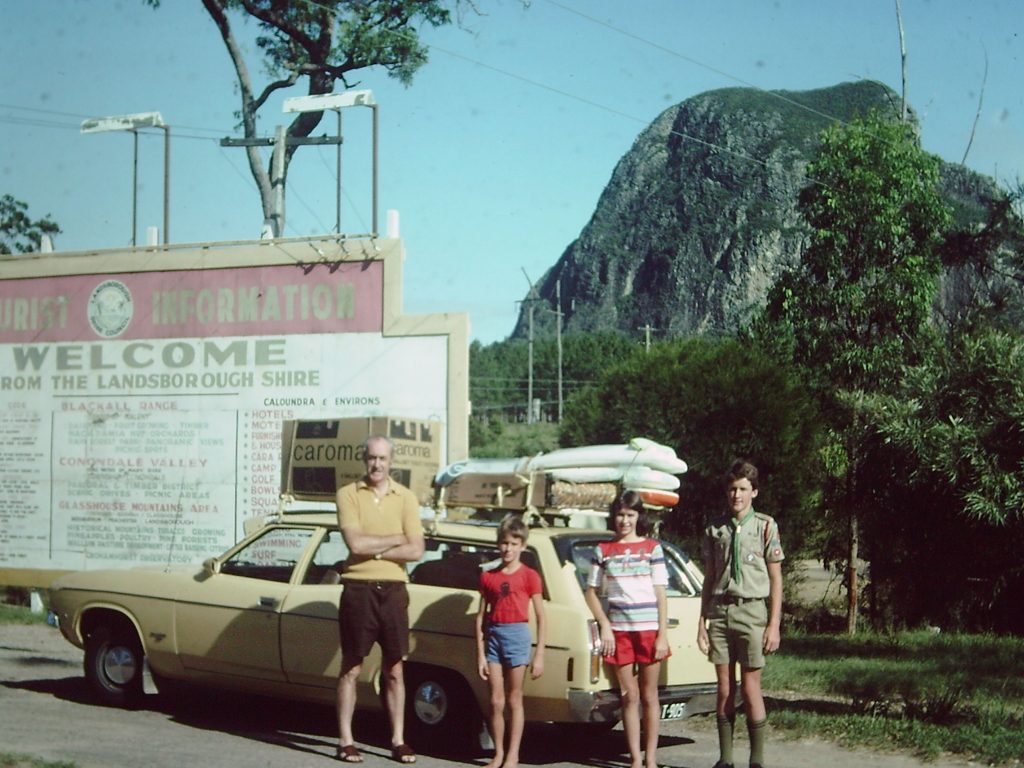 My family (dad – Bill, younger brother Keith, me and older brother Pete) heading away for a summer holiday, taking a stop near Mt Tibrogargan

As kids, we failed to appreciate the majesty of our surroundings. These outings were ‘just’ an adventure in the bush, usually associated with a fair amount of whinging.

“Do we have to go?”  But reluctantly we went, bribed with the promise of an ice-cream reward afterwards (the simple pleasures.)

These walks, however, were transformative. As a kid, I didn’t know of shinrin-yoku. I doubt many in Australia at the time, child or adult, had ever heard of the concept.

“Listen to the birds singing and the breeze rustling in the leaves of the trees. Look at the different greens and the sunlight filtering through the branches. Smell the fragrance of the forest, breathe in the natural aromatherapy, and taste the freshness of the air as you take deep breaths. Place your hands on the trunk of a tree. Dip your fingers in a stream. Lie on the ground. Do all these things and you will feel a sense of joy and calm. This is your sixth sense – a state of mind.”

Excerpt from the book “Forest Bathing” by Dr Qing Li.

Dr Li, a 54-year-old physician and President of the Japanese society of Forest Medicine, suggests by allowing nature to enter your senses – via your ears, nose, mouth, hands and feet – you unlock the power of the forest. The Japanese call it shinrin-yoku – shinrin means “forest” and yoku means “bath” – forest bathing. Li’s research indicates there are health benefits associated with shinrin-yoku, including reducing blood pressure, lowering stress levels and boosting your immune system. I’m with Dr Li on this. I find forest bathing therapeutic, whether walking through a forest or bushland, it calms my mind and leaves me with a sense of contentment.

As a nine-year-old, while I never consciously thought about shinrin-yoku, I did practice my own form of it. During walks I would stop regularly, to stare upwards without stumbling. Through my young eyes I thought those lanky straight tree trunks reaching skywards, their tips touching the blue expanse, were soldiers, standing guard. I always felt secure and safe in their presence. Many decades later, as I’m walking a forest trail inside Lamington National Park (no longer as a reluctant tag-along) I find myself stopping, shifting my gaze to the tops of these towering giants, seeking out those interconnecting leafy fans which mesmerised me as a child. Although my shoulders are now much higher from the ground, these ancient trees appear taller, growing as they clamour with their neighbours for rare pockets of sunlight.

I breathe in that familiar fragrant rainforest smell. The combination of damp soil mixed with vegetation and decaying timber triggers childhood memories of ambling along Lamington’s well-trodden paths. Not that nature aesthetics were of interest to me as a kid. My recollections of Lamington are of the dinner bell ringing at Binna Burra Lodge announcing mealtimes and the brightly coloured friendly birds flocking to the plates of bird food purchased at O’Reilly’s Rainforest Retreat. 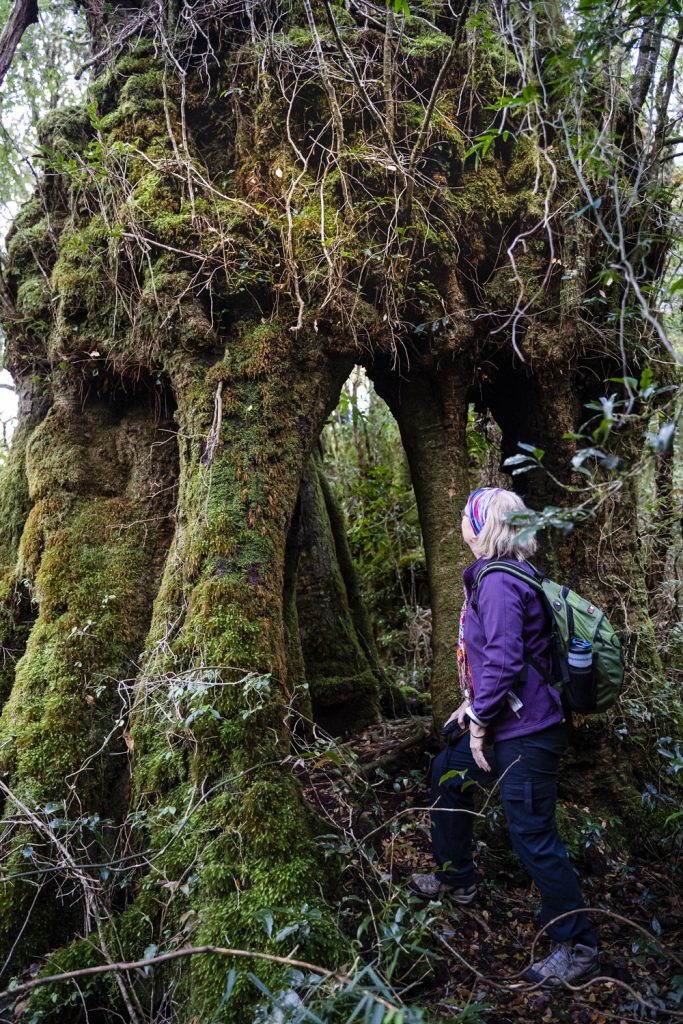 Peering up at an Antarctic Beech Tree on the Border Track. The trees are estimated to be around 5,000 years of age. Photo credit: James Anderson

In August 2019, four weeks prior to the fires that would soon reduce the sections of the park to ashes, I returned to Lamington again, this time with a group on a two-night, three-day trip with walking adventure company, Life’s an Adventure. On the first night, after walking the Dave’s Circuit trail, we stayed at the historical Binna Burra Lodge, blissfully unaware we would never see the lodge again. 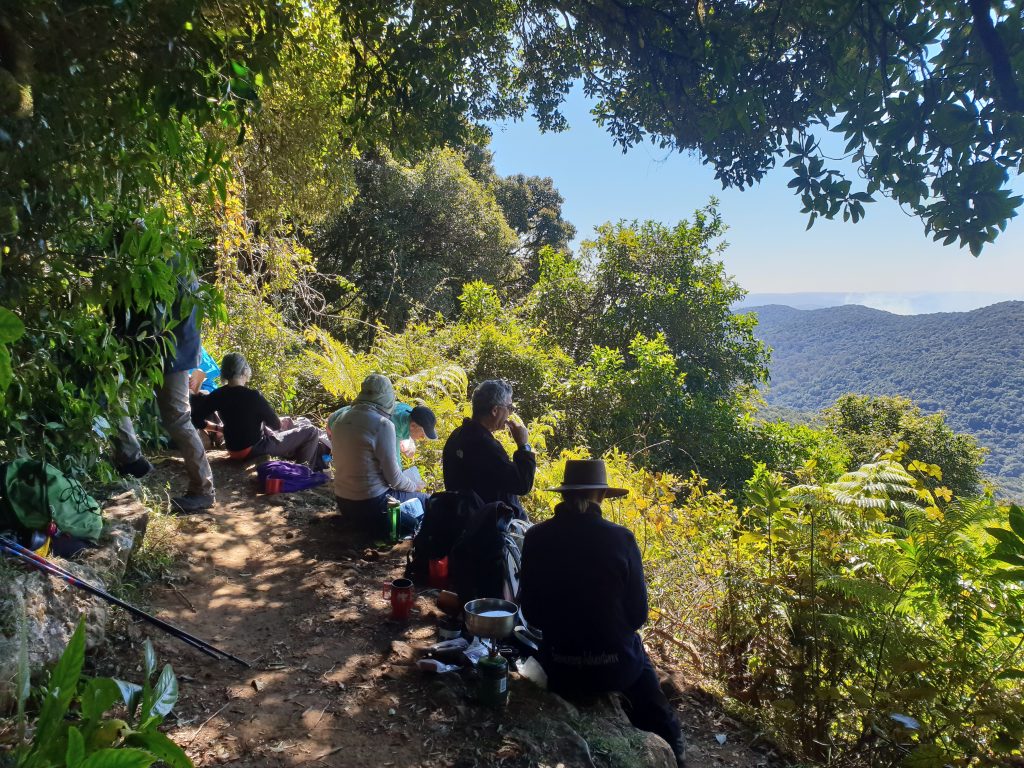 On the second day, we walked the Border track to O’Reilly’s Rainforest Retreat. Of the park’s 150 kilometres of maintained trails, this 21.4-kilometre track dubbed the ‘backbone’ of Lamington’s walking system, travels up the McPherson Range crossing the New South Wales and Queensland border several times. It is one of the park’s oldest trails, following the original route made in 1863 by surveyors Francis Roberts from Queensland and Isaiah Rowland from New South Wales. Their job was to establish an ‘intercolonial’ boundary line for early settlers (landholders) to know which ‘colony’ they had to pay rent to for their pastoral leases. With an average completion time of around six-seven hours, our intention was to reach O’Reilly’s in time for sunset cocktails. 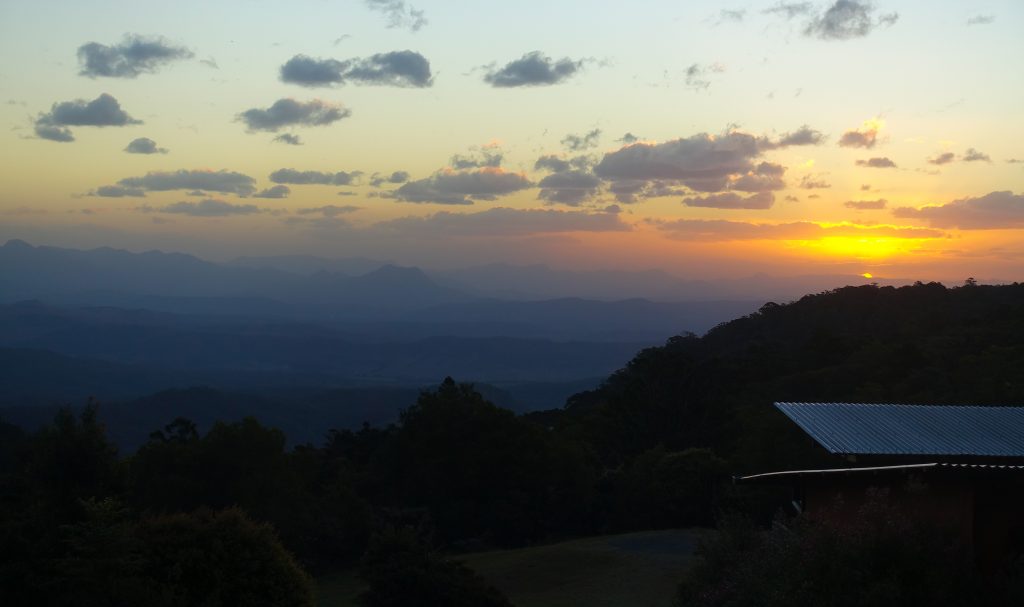 *The opening photo of me at Elabana Falls and photos of me sitting in the tree and peering up at the giant Brush Box was taken by Andrew Rankin.  Unfortunately, photo credit for Andrew was not acknowledged in the story in Wild Magazine.