This was visit number six to Hong Kong (should I be counting?)

Hong Kong, what I like about you, cue the song released in 1980 by the Romantics

It was the day before 2017 clicked over into 2018 and I arrived in Hong Kong airport a little later than planned (five hours) thanks to QANTAS and its policy of “safety over schedule.” It was annoying, but we’d all rather arrive late than not at all, right?!

I’m spoiled whenever I stop over in Hong Kong because my friends who live there – locals and ex-pats – always look after me. We meet for dinner, lunch, brunch and frequent footies (foot and shoulder massages.) I appreciate how my local friends arrange everything in Cantonese and in the next breath converse with me in English. Thanks to them I have more authentic experiences and get to ask all the questions about it – the perfect scenario for a travel writer!

And my being spoiled goes up a notch, with a friend’s generous offer of an apartment in Central on Hong Kong Island. Being a single mum who’s not raking in huge dollars at the moment, finding an affordable hotel in Hong Kong at Christmas time would be challenging.  With immense gratitude to my friend, a first-floor studio apartment in a western pocket of Soho becomes my home away from home for a week. 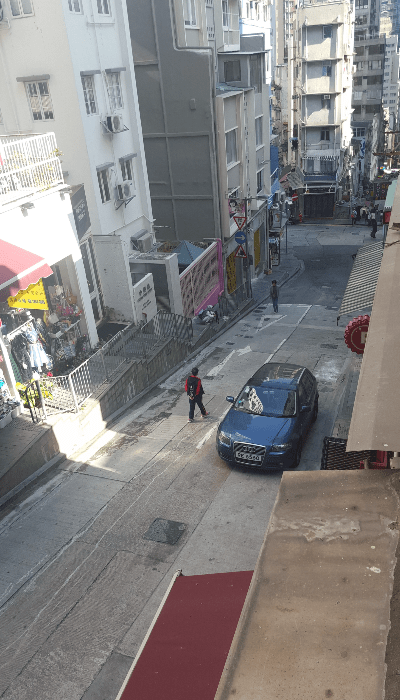 Peel street – the view from my balcony

They’re some of the reasons why I return to Honkers – friends who make the experiences in this fascinating place extra special. But what else do I like about Hong Kong?

Three years earlier I also stayed in this apartment, so the sense of familiarity in my neighbourhood almost makes me feel like a local. It’s on Peel Street, named after two-time British Prime Minister Robert Peel.  Peel Street, is actually two streets and I’m in the one blocked off to traffic. It’s my own little zen space where I escape the busyness of Hong Kong and its seven million-plus inhabitants anytime I want. Although one night during this last visit, the plumbing backed up (not my fault) and water started spilling out over the top of the loo onto the bathroom floor. That wasn’t a night of zen. Thankfully my friend (owner of the apartment) had the issue rectified the next day (unfortunately at considerable expense.) I learned about the challenges of owning apartments in Hong Kong buildings. After my renovation project I thought I had an understanding of the complexities of plumbing issues, but here, cultural differences mean they approach things a little differently! 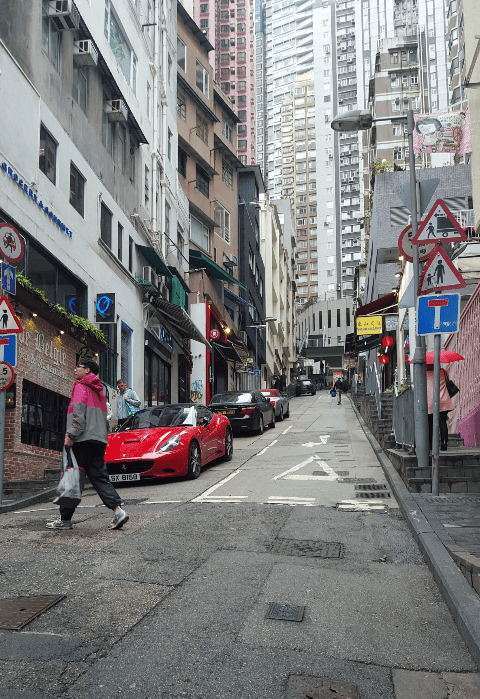 Mid-levels as the name implies, basically means halfway up the mountain – in this case, Victoria Peak which at 396 metres above sea level, provides fantastic views.  At the midway point of the Peak, Mid-Levels is a relatively quiet neighbourhood filled with narrow one-way streets, resulting in less vehicle traffic and arguably less pollution. Lan Kwai Fang, a nightlife hotspot is a short stroll and Staunton street filled with bars and cafes is one street from the apartment.

This area has an abundance of dining and bar options. But I’m not so much the party girl anymore. Shame, as there was a bar right under my apartment. Not far to stumble home should I be wanting that “one for the road” drink, but a little noisy when the last drinkers leaving after midnight continue their conversations down the street while I’m trying to sleep above. But I can’t complain, for this is Hong Kong – and I’m so far removed from my life in the suburbs of Brisbane. I just love it.  Pure adulterous escapism.

If you’ve ever wandered around Mid-Levels you’d appreciate there are steps! Hundreds of them. Now I’m happy to go down them, but its only been a year since the knee incident. So the less descending strain I have to put on that knee the better. This is where the Mid-Levels escalators are useful. This ingenious set of 20 escalators and three inclined moving walkways, run from Queens Road Central to Conduit Road in Mid-Levels.  Said to be the longest undercover escalator system in the world, basically, they’re a people mover, helping 80,000 people up and down Mid-Levels. The authorities have come up with a system to cope with peak times – the escalators move downwards from Mid-Levels between 6 am – 10 am and change to uphill from 10 am to midnight. They were my means of getting up and down from Mid-Levels to Central.

And finally, after so many trips to Hong Kong, I can confidently navigate my way to and from the Mid-Levels escalator without looking at any maps! 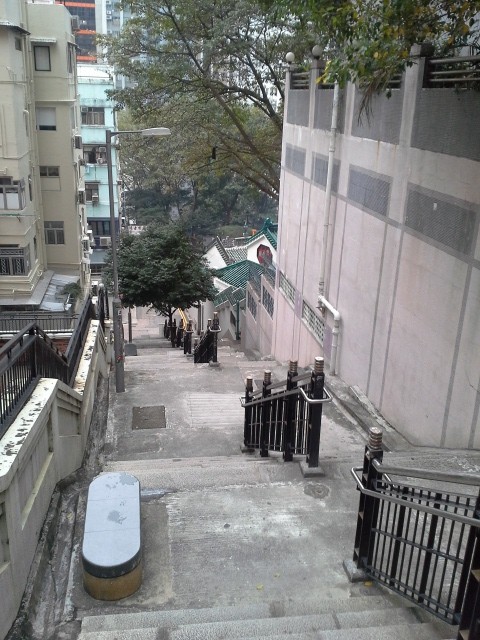 Mid-Levels steps down to Central 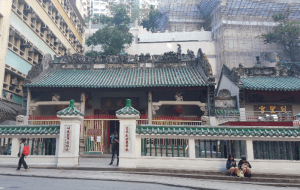 I love wandering the back streets and re-visiting some favourite places, like the Man-Mo Temple (124- 126 Hollywood Road Sheung Wan) a tribute to the God of Literature (Man) and God of Martial Arts (Mo). Finding the temple in the Mid-Levels area is easy if you follow the sweet smell of incense. It’s a quiet place to respectfully watch the locals (and many visitors) bowing while swishing the fragrant, smoking fortune-telling sticks up and down at the deities near the altars.

This is one of Hong Kong’s oldest temples built in 1847 during the Qing dynasty. I’m hopeful this visit to a temple dedicated to the God of Literature, means 2018 will be my year filled with writing inspiration!

The show on the Kowloon side at the Tsim Sha Tsui waterfront incorporates a spectacular display of lasers and lights, over a number of the towering commercial skyscrapers hugging Victoria Harbour. It starts at 8 pm sharp and is timed to music. The show only lasts for 10 minutes, but if you’ve not done it before, then do it!  I coerced my local friend to see it with me, she’d lived in Hong Kong her whole life and never seen it!

And we jumped on a Star Ferry for the short ride across Hong Kong’s Victoria Harbour, to Admiralty on Hong Kong Island. The first Star Ferry dating back to 1888, was a steamboat bought from Bombay, India for personal use by its owner. Prior to the first steamboat, anyone wanting to cross the Harbour used sampans (still seen crossing the harbour today.) The Star Ferry takes less than 10 minutes but the views of the spectacular city skyline lit up at night are memorable and worth the tiny $2.50HKG fee. 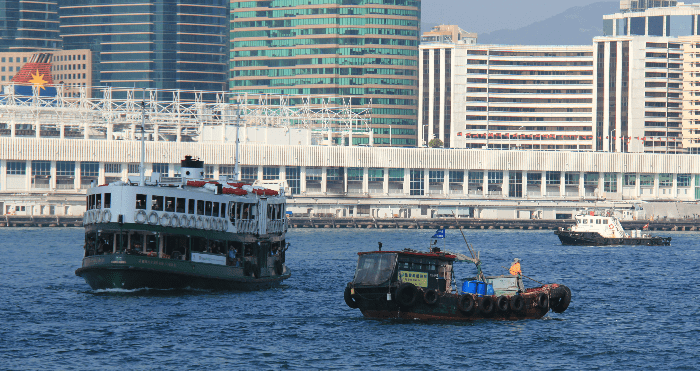 On this trip, I asked my friends to take me on a few hiking trails and discovered another fascinating side of Hong Kong. I was surprised to read that Hong Kong is predominantly “countryside,” with mountains and protected country parks making up over 70% of its 1,111 square kilometres. I associate Hong Kong with masses of residential towers and commercial skyscrapers. For too long I’ve been ignoring the country parks and reserves dominating much of Hong Kong and the many hiking trails within them. Two of my ex-pat friends, introduced me to a path on Victoria Peak called Pik Shan Path. Another friend took me on a half-day trail in the Cape D’Aguilar Marine Reserve on the south-eastern tip of Hong Kong Island.  I’m writing up a story on my experiences of these hiking trails, so I will be sharing that with you when it is published. By discovering these walks, I found the perfect place to escape the crazy, busy side of Hong Kong! 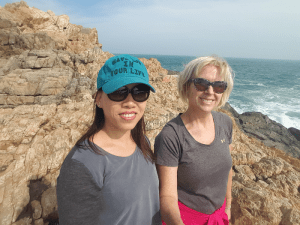 Hong Kong is the city that always eats. No matter the time of day or night there’s always somewhere open serving tasty food. My friends take me to new and interesting dining experiences with each Honkers visit. On New Year’s eve, we dined Sichuan style, a Chinese cuisine originally from the Southwestern region of China.  The roof of my mouth almost blew off when trying some of my friend’s recommended dishes spiced with chillies and Sichuan pepper.  There is no denying the Asian palette like it hot and spicy! 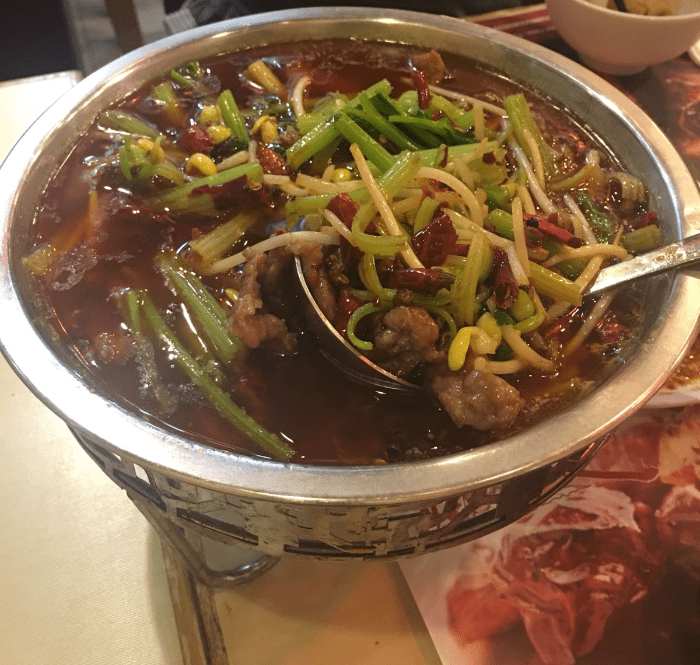 Another night we tried a local steakhouse near Bonham Road called the Den (8 Oaklands Path Sai Yin Pen.) Stealing the words once used to advertise the famous steak serving Norman Hotel in my hometown Brisbane, the Den would be Hong Kong’s worst vegetarian restaurant. This was carnivore heaven, where the steaks are served in Flinstone sized portions in a restaurant the size of a shoebox. Online food reviewers on Openrice rate it, but personally I thought my piece of wagyu beef was ordinary. And it was one of the most expensive pieces of wagyu beef I’ve ever had in my life! I realise I’m ordering in Hong Kong, where cows are not plentiful, so steak is going to be expensive. When the American couple sitting (extremely) close to our table (very small and intimate restaurant) asked the waitress where the beef is imported from, the irony: it’s from Australia!

I decided to mention the Den, as it was another Hong Kong “experience.” My lesson on this one was, don’t go all the way to Hong Kong for an Aussie steak!

I was taken to a classy restaurant in Central called Shanghai Jade where they serve delicious Shanghainese cuisine. I was guided through a tasty selection of courses by my wonderful foodie friend, who takes the time to deconstruct the meals and explain their complex ingredients. Oh and no spicy hot chili dishes that night (phewee). 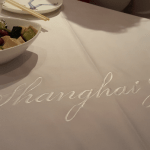 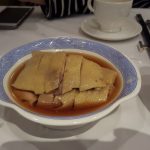 one of the many delicious Shanghai Jade dishes

For a different experience, we visited Kennedy Town, the last stop on the line from Central where we feasted on middle eastern food.  The restaurant was in Hau Wo street – where you could find a full range of international restaurants, including Italian, Belgium and Japanese.

My last day ended perfectly with a dim sum brunch at a favourite place in Central called Fu Sing (1/f Grand Millenium Plaza No. 181 Queens Road Central.) And despite practising all week, I still have much room for improvement with my chopstick eating technique!

Where to have a drink 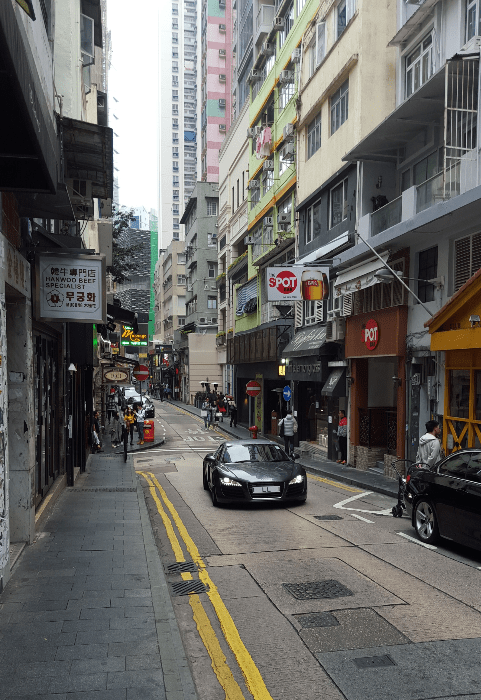 And it might surprise you I haven’t mentioned the shopping. I tried restraint on this trip, with the Aussie dollar not so favourable! Apart from the Wing On Department store (got to love that name) where I found a few bargains.

I could continue writing about all the wonderful discoveries I made in Hong Kong during this visit, but that’s enough for now. I’ve left Hong Kong after my sixth visit, telling myself that’s it, I’ve no need to go back. But with good friends and new experiences waiting, maybe Honkers will lure me back.