The North Texan town called Grapevine, located halfway between Dallas and Fort Worth, possesses a unique history, charm and character. Add in a dash of Texan southern hospitality and you have a place worthy of a stopover, whether it’s for a few hours or a few days.

Savouring the last sip of my frozen margarita, I wasn’t feeling confident I could manage another. Sitting at a back table of Esparza’s Restaurante Mexicana, Marilyn our waitress is working her southern charm, doing her best to sweet talk me into ordering a second margarita. The menu cover boldly claims Esparaza’s is the Margarita Capital of Texas. I’ve been in Grapevine, the town smack bang in the middle of Fort Worth and Dallas, for less than 24 hours, but I’m becoming aware of their generous portion sizes. I could have shared my last margarita with two people – three easily. But Marilyn who’s worked at Esparza’s since the restaurant’s opening in 1985 is pretty convincing. She suggests I should try the ‘Swirl.’

“Because it’s layered with a swirl of frozen sangria,” she says smiling. 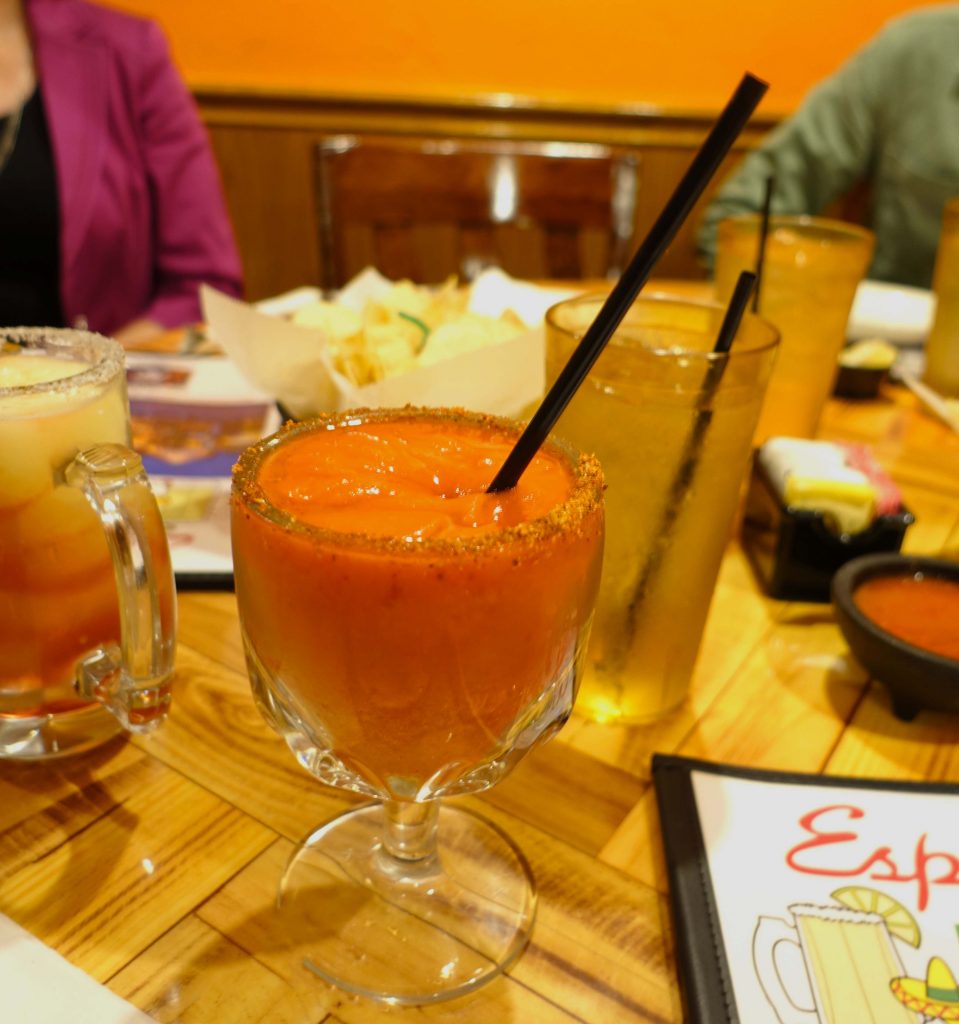 I can’t argue with that logic so I order another. But before it arrives I decide to break away from the food (quaffed one too many taquitos and brisket quesadillas) and step outside to Esparza’s front patio. I can faintly hear live music lingering on the balmy evening air. The restaurant is a two-minute stroll from Grapevine’s Main Street and it’s the first night of the 32nd Annual Grapefest – the largest wine festival celebrated in America’s southwest.

Marilyn sashays towards me with my fresh margarita. “This is Le Freak playing,” she says.

“A disco cover band,” she explains.

As I’m nodding (still with no idea who Le Freak are) Marilyn tells me she’s looking forward to Saturday night’s musical line up with Don Felder formerly of The Eagles. Now there’s a band I know (and love.) I’ll make sure to be around the main stage on Saturday night to catch Don and his band. (Tickets to Grapefest also cover the musical entertainment throughout the day and into the evening.)

Marilyn lives locally and admits to having attended every one of Grapevine’s 32 Grapefests. “It’s the best time of the year to be in Grapevine,“ she says smiling. “And working here is the best too, they’re like family,” she adds.

Dan Weinberger, the owner of Weinberger’s Deli also expresses similar sentiment towards Grapevine. I’d seen the crowds gathering inside Weinberger’s throughout the festival and I could not leave Grapevine without trying one of their signature meals.  Catching the proprietor of the business behind the counter serving up his family’s delicacies gave me the opportunity to ask a few questions. Dan bless him, was very happy to chat and came out from behind the serving counter to share his family history.

“My family has been in the Deli business since 1952,” Dan says proudly. “After 9/11 we moved from Chicago eventually settling in Grapevine. When I opened Weinbergers in 2002, you could play baseball on the main street it was so quiet, but now we have traffic jams late into the evening.”

This was Dan’s 16th Grapefest. “They keep getting better and better,” he says smiling. “But we’re also lucky we have a great community.”

Early Sunday morning, the last day of Grapefest, I meet one of the town’s passionate community members scooting along Main Street in a golf cart. Gayle Hall, in her 60’s has been working as the Grapefest Festival Director for many years. She was happy to pause her errand running and talk. She has a smile that was welcoming despite the early hour.

“This job is so rewarding to me because I have the opportunity to give back to a community I was born and raised in,” she says in a sweet southern drawl. “You know when folks say their great-great-grandparents came in on a horse and covered carriage – well mine did. Five generations of my family were born and raised here.” 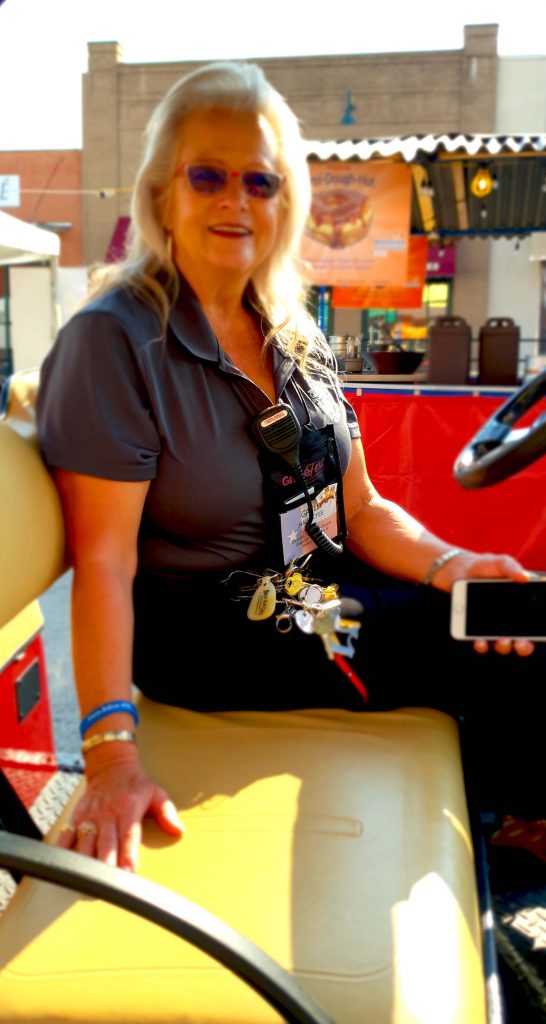 Gayle’s ancestors originated from Prussia, arriving in Tennessee in the late 1700s and 1800s eventually making it through Missouri to settle around the Grapevine area. “As a 5th generation Texan, you can say Texas is in my blood,” she adds flicking her gorgeous long white tresses.

Grapevine’s convenient central location 32 kilometres northwest of Dallas and 30 kilometres northeast of Fort Worth, means it’s a quick half an hour uber or taxi ride into the centre of either city’s downtown areas crammed with world-class attractions. (Grapevine also have a shuttle bus running to and from the International Dallas Fort Worth Airport.) But more than the convenience of location and a treasure trove of amenities and eateries, Grapevine is a community proud of their history.

Grapevine’s legacy began in 1843 when Texas President Sam Houston (1793-1863) and a group of Texas Commissioners met with the leaders of 10 Indian nations to sign a ‘Peace Treaty’ at Grape Vine Springs. This meeting opened the area to settlement, named Grape Vine because of its proximity to the Grape Vine Prairie. (The abundance of wild mustang grapes growing in the area may also have influenced the name!) The small community which began with a post office, church and school in the late 1870s, grew to a moderate agricultural based community thanks to the Cotton Belt Rail Line (built in 1888) which stopped at Grape Vine. In 1914 the town’s post office altered the name to its current: Grapevine.

Downtown Grapevine is located only six and a half kilometres from the International Dallas Fort Worth Airport (DFW.) As the fourth busiest airport in the world for aircraft movement (2017 figures) the DFW Airport has contributed to the town’s prosperity. Current residents numbering almost 54,000 enjoy the flow on effects of tourism traffic (67 million passengers passed through DFW in 2017.) All the terminals at the DFW airport are on Grapevine land which means the businesses inside these terminals pay taxes to Grapevine. This lucrative and clever deal was negotiated by astute Mayor William D Tate and his council during his first term of office in 1973, the year before the DFW opened. 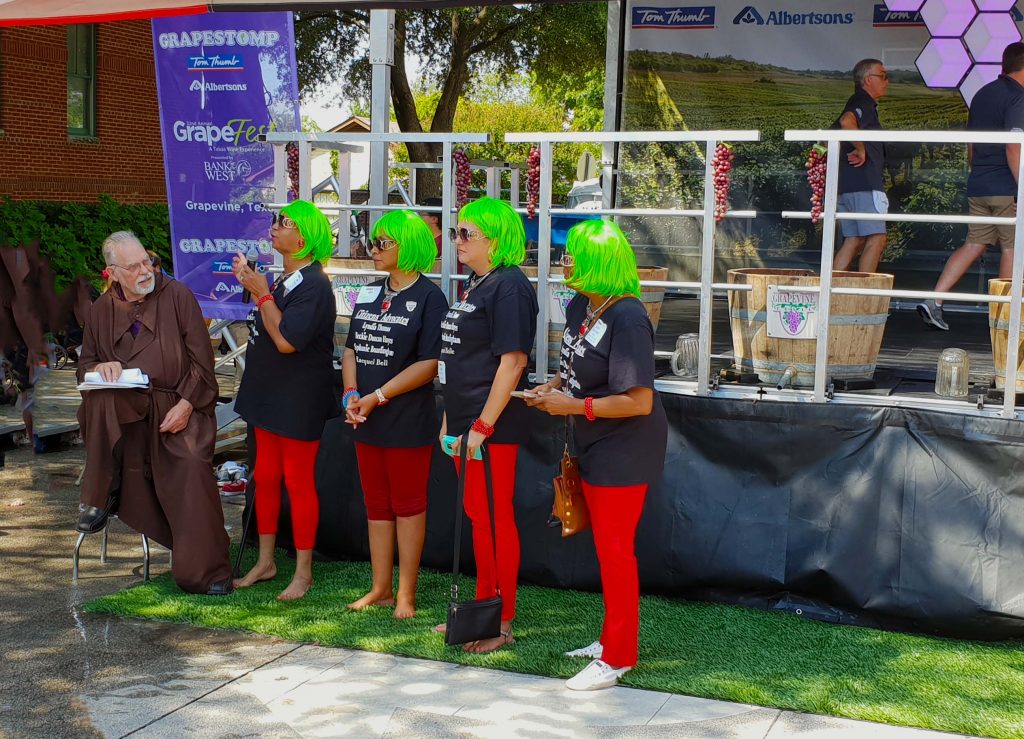 Mayor William D Tate and contestants at the Grapestomp during Grapefest

Historic Preservation – it’s all in the family

As with most close-knit communities, there are actively involved locals who know a fair amount about their town. I met one such local, Grapevine business owner Debi Meek inside the family-owned Tolbert’s Restaurant and Chilli Parlour on Grapevine’s Main Street.

The restaurant is filled with diners who’ve come to taste Tolberts famous chili. We’re greeted by the restaurant owner, Kathleen Tolbert, daughter of Frank X Tolbert who in 1976 opened the first Tolbert Chili Parlour in Downtown Dallas. Kathleen helped manage her father’s restaurant in Dallas until it closed. She’s kept the Tolbert legacy going when she opened in Grapevine in 2006.

Over a bowl of Tolbert’s Texas Red chili (the same recipe created by Kathleen’s dad and brother), Debi shares a story about the current Mayor’s father, Gordon Tate who was Mayor of the town from 1948 to 1952.

Debi points across the road from where we’re sitting to a building where she operates her business (the Bermuda Gold and Silver Jewellery.) It’s the same building that was originally the Grapevine Home Bank (1882), later becoming the Grapevine National Bank (1900.) 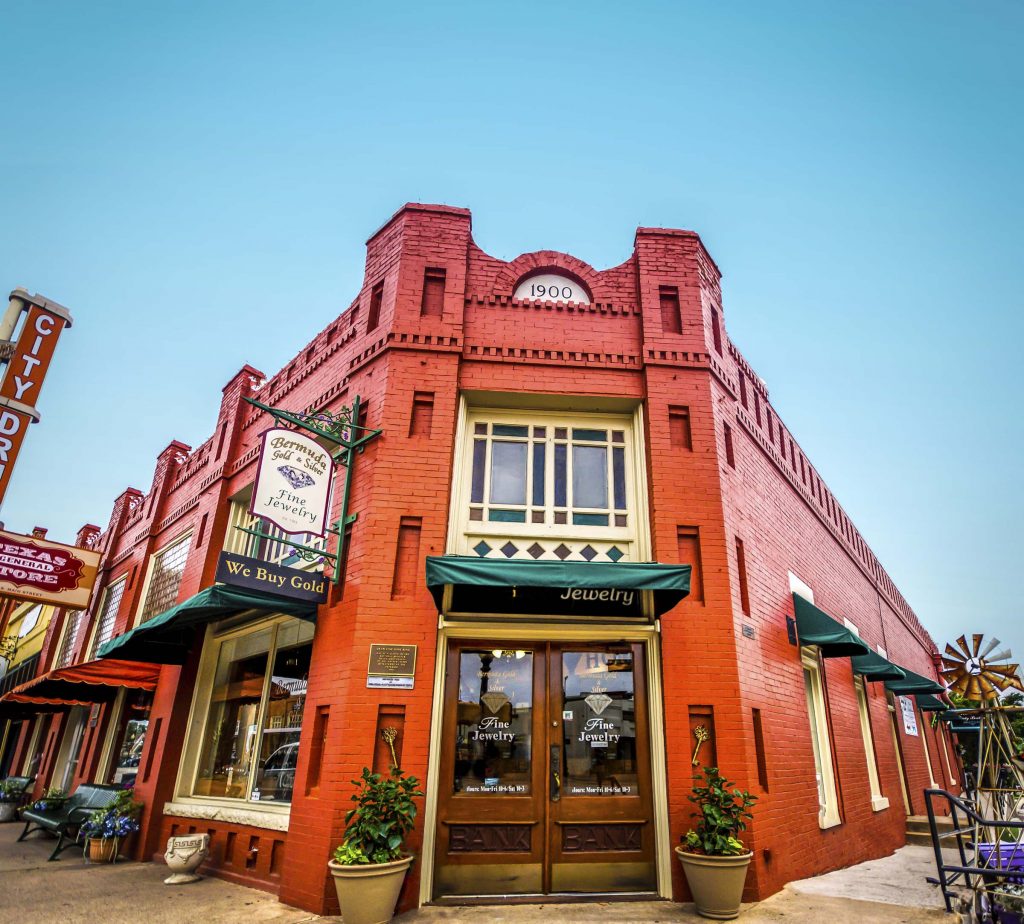 “When two members of Bonnie and Clyde’s gang robbed the bank on December 30, 1932, our current Mayor’s Dad, Gordon Tate along with two other guys helped trap one of the robbers retrieving the getaway car and the money,” Debi says excitedly. “The other robber was also apprehended and both served time for the robbery.”

Debi proudly displays in her store a framed newspaper clipping from the front page of the local newspaper about the incident and the capture of the two robbers.

The 76-year-old William D Tate has served as Mayor of Grapevine for 42 years and is a much-loved icon around town. He’s passionate about helping to preserve the town’s history. Thanks to a special ordinance created in 1991 to protect Grapevine’s unique heritage and architecture, historical landmarks are easy to find.

A landmark very special to Debi is a log cabin. Built in 1845, the log cabin is the oldest standing building in Tarrant County (Northcentral Texas.) Debi and members of the Grapevine Historical Society saved the historic building from being demolished in its original location. “We took the cabin apart, log by log, numbering each with nail polish,” says Debi.  “The cabin was moved from Dove Road and re-built in Main Street, where people can see what life was like in the 1800s.”

The log cabin was where Reverend David Myers met in 1846 to establish the Lonesome Dove Baptist Church (not to be confused with the TV series adapted by screenwriter Larry Mc Murtry from the novel of the same name.)

“Because of my family ties, I’m the keeper of the cabin,” says Debi proudly. She is Reverend Myers’ great, great, great granddaughter.

In Tolbert’s restaurant, I mentioned to Debi the unusual looking curved concrete block building with the iron door in the middle of the main street next to Willhoite’s restaurant. “Why that’s the Grapevine Calaboose,” Debi says in her sweet southern twang. Calaboose is a word I’ve not heard before, so I ask Debi about the building. Built in 1909, the Calaboose served as a one-room jail for the sheriff to hold any ‘petty’ criminals. Historically Grapevine was a town Cowboys passed through and I wondered how many unsavory characters had spent a night locked away in the concrete confines of the Calaboose.

The town has preserved many other buildings including the Nash Farm, 800 metres from Grapevine’s historic main street. Built in 1869, the farmhouse and grounds have been lovingly restored allowing visitors to experience what 19th-century farm life on the Grape Vine Prarie was like. Volunteers in period costume demonstrate cooking in a vintage 1892 wood burning stove, cotton picking, folk craft and for those keen to try, there’s an opportunity to learn how to crack a whip.

With their dedication to preserving the town’s history, the colourful characters, numerous eating and retail attractions, combined with large doses of Texan hospitality, Grapevine is a special place to experience. And I haven’t even mentioned the Texan wine (there’s another story coming about the Texan wine culture – certainly tasted some beauties during Grapefest.)

And for the record, yes, I did manage to squeeze in another gigantic margarita!