Scotland’s Cairngorms National Park is the largest National Park in the United Kingdom.  Inside its 4,528 km2 expanse are five of the six highest mountains in Scotland. The highest is Ben Macdhui (1,309 metres.)

On the 7th of October 1859, Queen Victoria at age forty hiked to the summit of Macdhui.  She felt something, making the comment in reference to the climb.

“A sublime and solemn effect, so wild, so solitary, with no-one but our little party there.”

Some 159 years later, I find myself also hiking in Scotland. Unlike Queen Victoria, it wasn’t the Cairngorms, but the Isle of Skye (and I was a wee bit beyond the age of forty.)

There are always reasons. I was looking for a connection to the solitary, getting lost in the wild and ………

Somewhere in my arteries, runs a tinge of Scottish blood

My trip to Scotland in May 2018 was in memory of my father who passed away on April 12, 2017, three months shy of his 81st birthday.  My dad had a reputation for telling a yarn to anyone prepared to listen. And he’d love to regale me with stories of my Scottish ancestors, (my great grandfather was ‘tinged’ with the tartan.) And he gathered plenty of yarns into a ‘book’ of sorts. He laboured for many years on this family history project and compiled (more like crammed) into a manila folder with over 300 typed pages (using an old school typewriter.)

This extensive ‘unique’ version of his family history was given to each of his three children. Initially, he said the bright orange folder was to be given after his death (so no one could hound him if his research was to be questioned.) But he changed his mind on this, in case we had questions for him before he passed.

Unfortunately, because I was too pre-occupied with raising my boys and my ‘busy’ life – I never found time to read his much worked-on family history – until recently.

The Johnston history according to my father

My father says our Scottish ancestors (Johnstones) were a powerful clan in Scotland’s western border country. Feuds were common and dad writes of many barbarous acts and vicious battles between clans, including the Battle of Dryfe Sands. This battle took place on December 6th, 1593 near Lockerbie between rival clans Maxwell and Johnstone. After that battle, it appears the Johnstones were forced to leave Scotland for Ireland. But like many displaced Scotts, they filtered back.   And the ensuing stories make for an enlightening read.

As anyone interested in history knows, stories are subject to interpretation. With the passing of centuries, there are usually questions around the accuracy of sources.

I know over time my father embellished his version of family history, no doubt assisted with a few drams of whisky. He had a fondness for McCallums blended Scotch Whisky.

“Don’t buy me any of that expensive rubbish,” he’d constantly admonish me. “The cheap stuff is just fine.”

As a lover of stories and history, his passing had me yearning for Scotland. 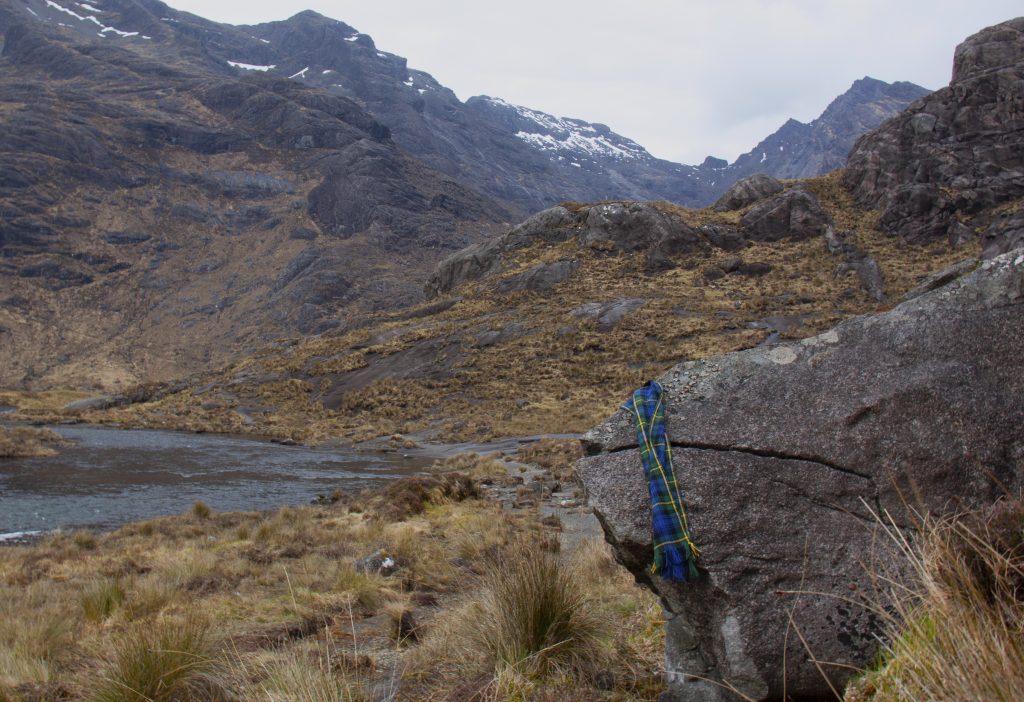 The Johnston tartan – goes where I go

Following my 2018 travels, I wrote a story about hiking the Isle of Skye. I’ve included an excerpt below.

As one of Scotland’s top three tourist destinations behind Edinburgh and Loch Ness, Skye features regularly in articles as a must-see location. An unfortunate consequence is the excessive number of tourists descending upon Skye during peak season (June through August.) Because I was keen to avoid the tourist crowds (and the annoying midges that appear around mid-May) I signed up as a solo traveler on a seven-day walking tour with Wilderness Scotland for the end of April 2018. Chosen for their low group numbers (capped at eight) and their range of walking destinations, this trip was their first hiking tour of the season.

And let’s not forget the weather at that time of the year: range indications suggest it should be around a pleasant 7.6°C – 10.6°C.

I flew to London in late April. I finally met in person a writer colleague (we’d met ‘online’ through the Australian Writer’s Centre) who decided she’d join me on the Skye hike. After reacquainting myself with the capital of England, including doing this fabulous foodie tour around the East End and returning to my old stomping ground of Wimbledon, I caught a train from London’s Euston station to Glasgow. A few fun days exploring this cultural hub before Amy arrived late on Friday night for the start of our Wildnerness Scotland tour the following day. After a very early wake-up call (the sound of the hotel’s smoke alarm saw confused guests evacuate in PJ’s out in the car park around 5 am) we caught a train to Inverness to meet our new crew.

Skye – I sense your impending magic.