Visitors to London keen to tap into one of the city’s rapidly changing neighbourhoods should take a walking tour in London’s East End. In the back streets of Spitalfields, Hoxton and Shoreditch, not only will you discover the area’s fascinating multi-ethnic history, you’ll be indulging in a range of tasty treats.

“Pudding is just a vehicle for custard,” announces Emily “that’s why pudding was invented, to hold the lovely custard.”

I’m sitting inside the English Restaurant on the corner of Crispin and Brushfield street in Spitalfields one of  the colourful ‘hoods in London’s East End. This 17th-century restaurant, the exterior of which looks as though it’s straight from the pages of a Charles Dickens novel, is our second stop of the morning on Eating London’s The East End of London Food Tour 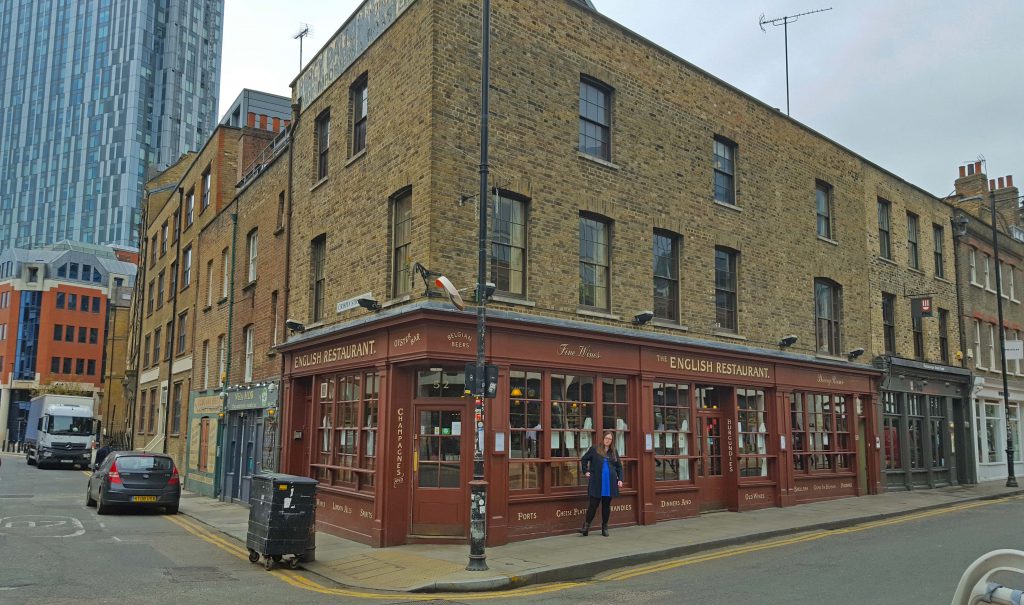 Emily originally from Worcestershire is the tour guide. She has an accent that is both captivating and entertaining. This and her quick wit has our small group of ten listening to her every word (until the bread and butter puddings arrive.) With small jugs of that lovely custard on the side, everyone turns their attention to the ‘lovely puddin’ and starts digging in.

You cant’ let a good pudding go cold, can you?

Our tour begins at the designated meeting place at the Old Spitalfields Markets, an easy seven-minute walk from the London Underground’s Liverpool Street station. “During our three and a half hour stroll around the East End today, we will see how all the food and the history fits together,” the enigmatic Emily announces to our group. “Hopefully by the end of the tour, you’ll have a nice picture and understanding of this eclectic area of inner London. And with tummies full, you’ll be ready for a sneaky nap later in the afternoon.” 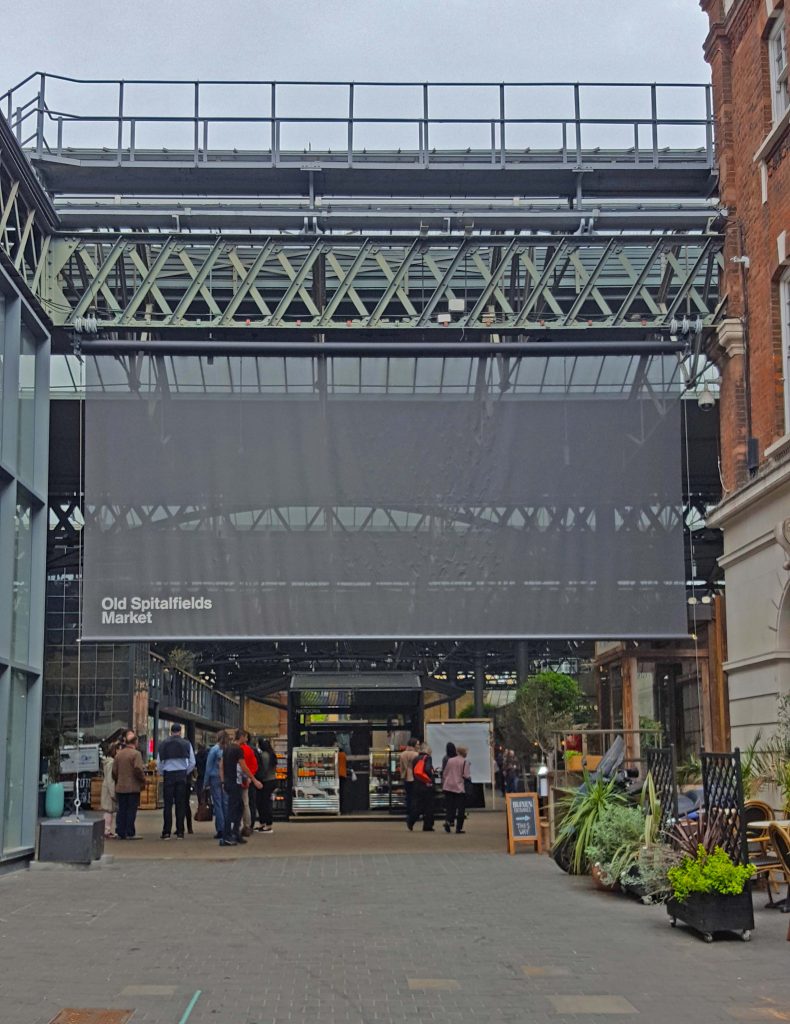 The Old Spitalfields Market site we’re standing on this crisp Tuesday morning dates back to 1638 when Charles I signed the licence to commence trading. For over three centuries, it operated as a fruit and vegetable market before closing in 1991. The covered market underwent a massive refurbishment, re-opening in 2005 and today is filled with stalls selling antique clothing, vintage treasures, artwork and food. During the 1800s and early 1900s, the market and surrounding area would have looked vastly different to today’s trendy version. Back then the area was more of an inner-city slum. Below the landmark of the Christ Church were streets of decrepit buildings harbouring the poor and impoverished citizens of London. 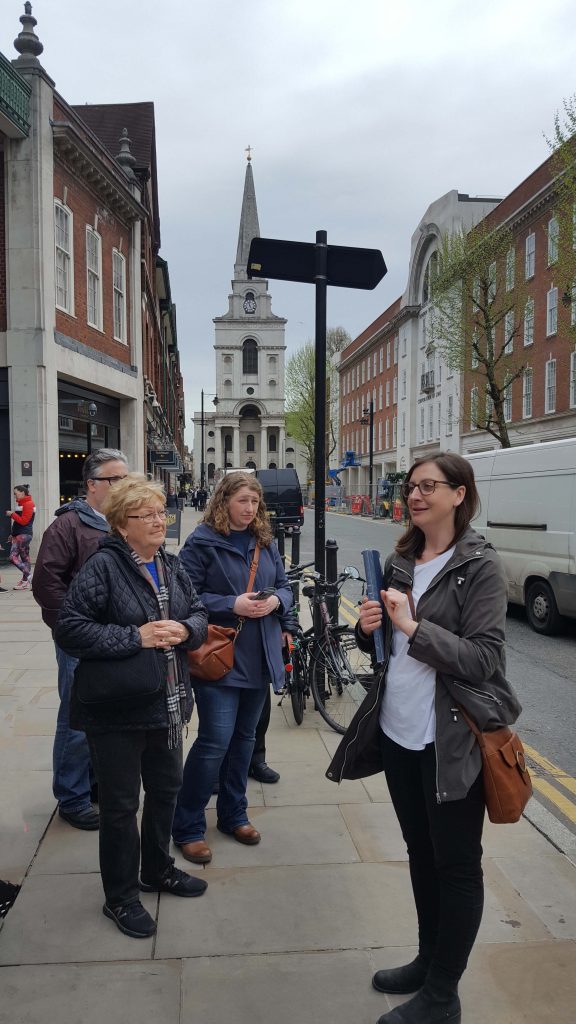 Emily talks to the group outside the Old Spitalfields Markets. The landmark building, the Church of Christ is in the background.

The area was a magnet for different ethnic communities, who over the centuries have come and gone. “During the 17th century the French migrated here, then left and were replaced by the Irish who left and were replaced by the Jewish,” Emily explains. “The latest wave to take over the area were the Bangladeshi community and we’ll see lingering evidence of many of these communities as we walk.”

We stroll across the road to Commercial Street stopping at the St. John Bread and Wine. This old bank building has been converted into a restaurant owned by renowned English chef Fergus Henderson. Here we sample the English breakfast staple: the bacon sandwich.

So what’s exciting about a bacon sandwich? 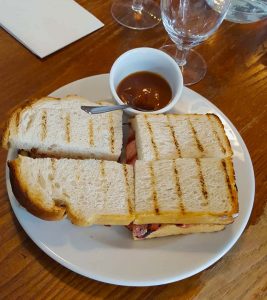 Well, this ain’t any old sandwich. The fresh bread (baked on site) the especially smoked pork and the ‘secret’ dash of sauce make this a delicious mid-morning treat to kick off the tour. Looking over the menu and hearing the hints from Emily, this award-winning restaurant is added to my ‘return to one day’ list. Must try more than their bacon sarnie!

We leave the restaurant and walk down to the street corner where Emily points out the Golden Heart Pub. “This is a famous 1900’s boozer,” says Emily who suddenly stops mid-sentence. “Oh look there’s Fergus Henderson!” She’s just spied St John’s Bread and Wine owner strolling up the street. None of our group has any idea what he looks like but curious we follow her gaze. As we discover throughout the tour, Emily is on the ball with what’s going on around us and full of gossip and fun tidbits of information. 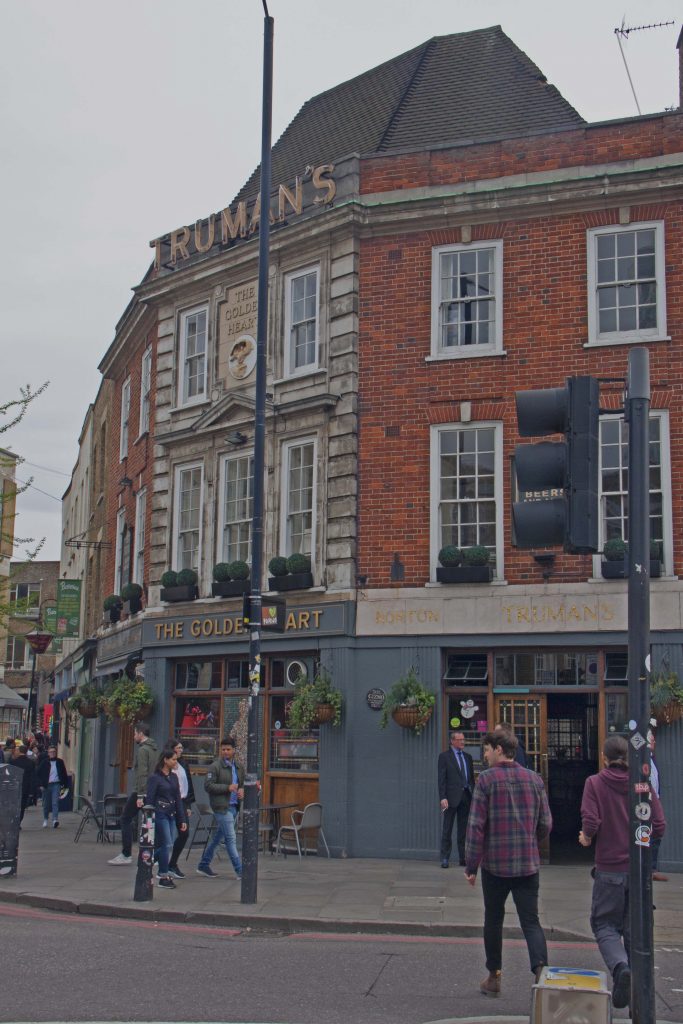 I don’t want to give away all the surprises for the food tour by writing about them here (we had eight tastings.) But I will say every eatery we stopped at was a different taste experience. Over half of our tour were Americans and when I quizzed them what was their highlight, they said it was the fish and chips wrapped in faux newspaper from Poppies Fish and Chips on Hanbury Street.

Pat ‘Pop’ Newland is an East End institution, an Irishman living in London who set up the original Poppies in 1952 (there are now five fish n chip locations.) My piece of cod (the fish Pop insists is the best to use for fish n’ chips) was perfectly cooked – fresh and golden in colour – in a batter that was so, so delicious (secret recipe of course.) And their chips crunchy on the outside fluffy on the inside – perfection and not easy to achieve.  When Emily offered a leftover cone, who do you think was eager to take another round?! (Moi nudged the polite Americans aside.) 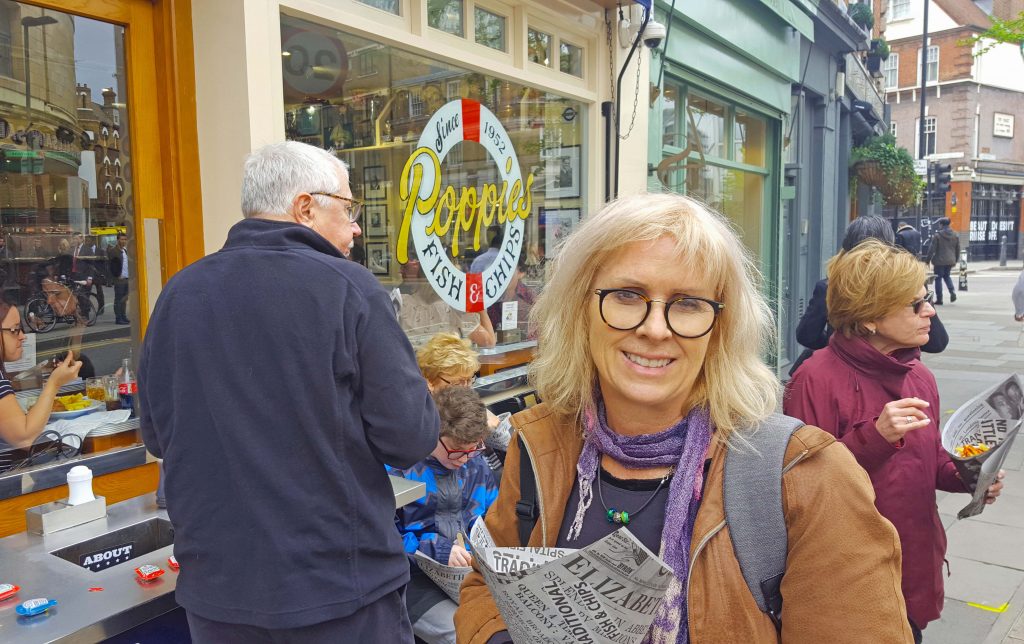 Among my own highlights were the delicious curries we ate at Aladin on Brick Lane. Living in London back in my early 20’s (a wee while ago) I still remember the amazing curries we enjoyed at Ahmed Tandoori in Wimbledon. Whenever I think of London, I always long for a spicy curry.  Emily had selected three curries ranging from mild to spicy to suit all palates and from this curry lover: yes they were all delicious.

Had I not been on this tour I doubt whether I would have eaten there. I’m very happy that I did having read (afterwards) Aladin is consistently rated by the BBC as one of the best curry houses in the world. Have also added this to my ‘return to one day’ list.

The Pride of Spitalfields Pub was another special discovery. An intimate local pub, located in a quiet street off Brick Lane (Heneage Street.) Lenny the pub cat greets the patrons in this step back in time drinking establishment. A rare find in the changing persona of East End. 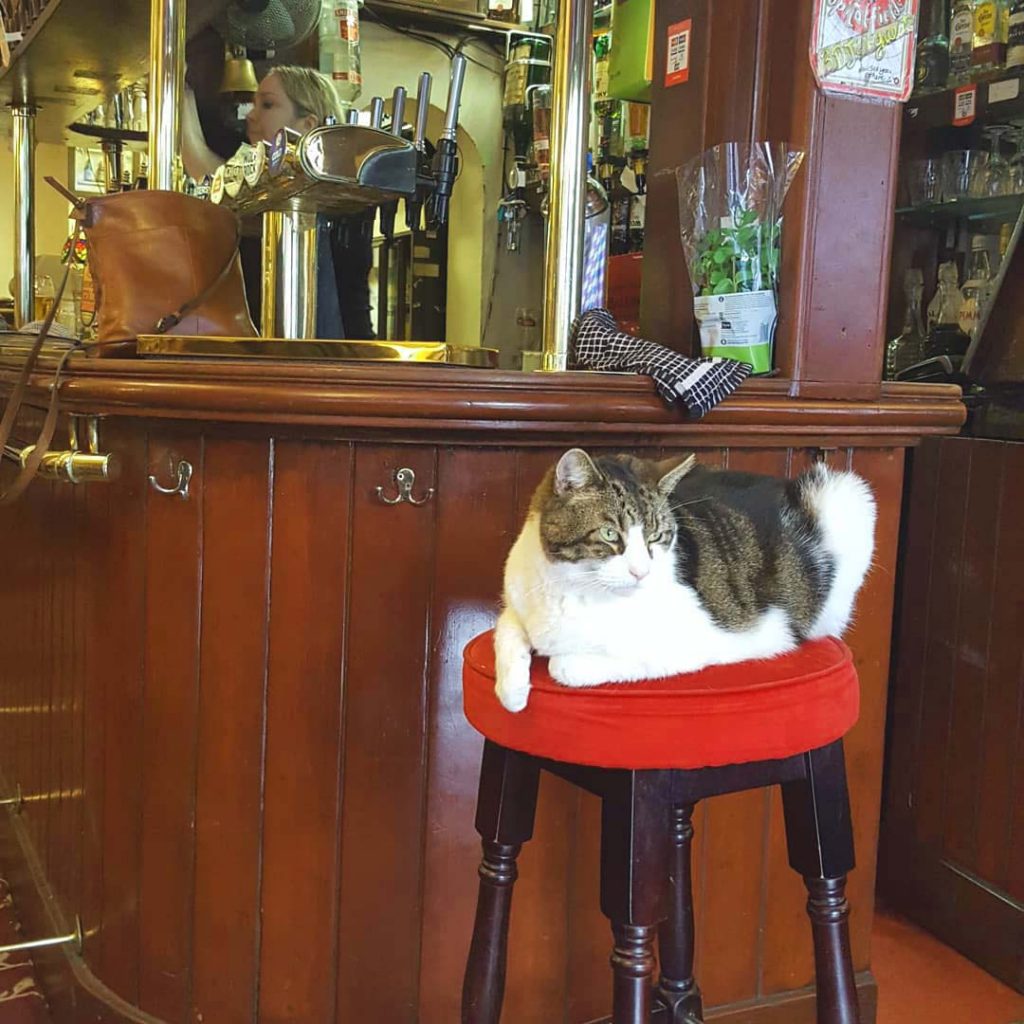 Pride of Spitalfields meet and greeter Lenny the Cat

It’s not all about food

Apart from the food and history, there’s the street art. Colourful graffiti is found on Bacon Street, Hanbury Street and all over Brick Lane’s side alleys. If Emily hadn’t pointed out, I would have missed the indiscreet artwork by environmental artist Jonesy and the amusing alterations to traffic street signs by Italian-based French street artist Clet Abraham.  “It always pays to look up,” advises Emily. 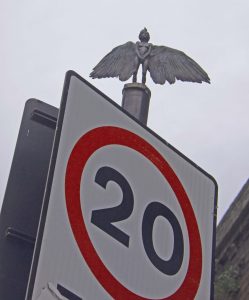 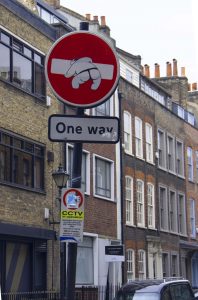 The tour ended in the hipster neighbourhood of Shoreditch at a place called Pizza Express where we managed to somehow squeeze in a slice of salted caramel tart. A sweet way to complete our vast array of food tastings. 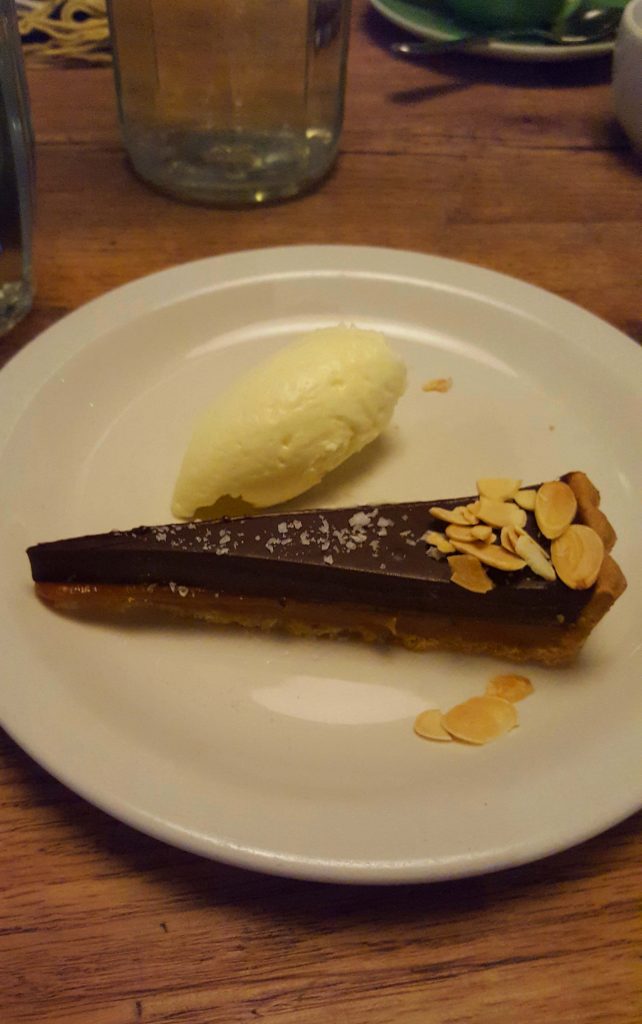 I stayed after we said our farewells to enjoy a glass of wine. Posting on Instagram I was in Shoreditch a friend from NYC replied saying they also were visiting Shoreditch.

With rapid messaging we worked out they were having dinner at Dishoom in Boundary Street, literally around the corner from Pizza Express. I walked over and met a couple I have not seen in 15 years!  An incredible moment of sheer serendipity – thanks to social media and a fabulous food tour.

This very colourful and historically fascinating neighbourhood of inner London should be on your must-see list. This tour is fun, informative and the selection of food tastings is superb. Guaranteed to make your tummy bulge.  I would have spent a ridiculous amount of time trying to find all these interesting places on my own and would still probably be wandering aimlessly around the East End. Following Emily, we found them all in just under four hours.

My Tip: I suggest you don’t eat breakfast

I was a guest of Eating London Food tours. All opinions expressed in this article are my own, are honest and have not been influenced in any way.