Thailand – the land of smiles and baggy pants

The aroma of sweet coconut and zesty mint fill the air. I inhale deeply. The scents are coming from my body scrub treatment at the Anantara Spa in Bangkok. Lying face down on the massage bed in one of the spa’s private rooms, my naked skin is relishing being scrubbed with the white coconut and mint concoction. Each stroke by my Thai massage therapist erases any lingering jetlag. 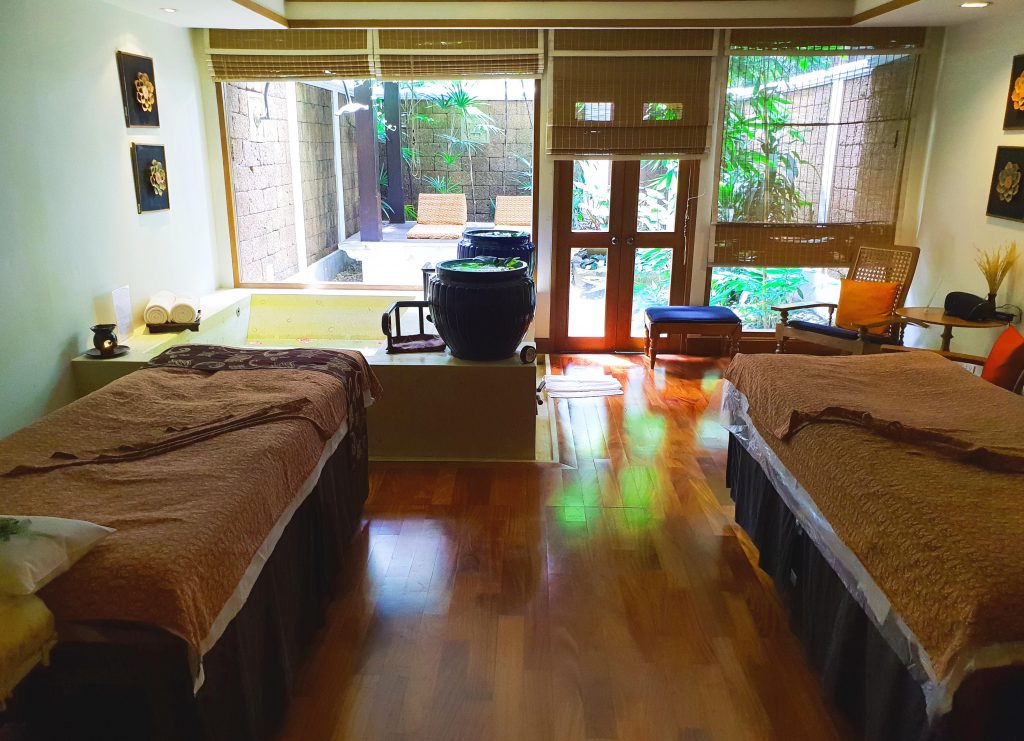 Rewind 15 hours earlier, to me racing into Brisbane International Airport as the last passenger checking in on an overnight flight to Bangkok.  At the time of choosing the red-eye flight, I thought with a little sleep the eight and a half hours would pass quickly. I hadn’t factored in the ongoing cries from a baby who refused to sleep, preventing me from any shut-eye. When the wheels of the Thai Airways 787 Dreamliner touched the tarmac, I felt far from ‘refreshed.’ But as a parent myself, I thought it best to accept these ‘incidents’ are sometimes part of the journey. Besides, I had my pre-booked spa pampering to look forward to.

Hotel on the river

Travelling from the Suvarnabhumi International airport to the Anantara Riverside Hotel on the Thonburi side of the great Chao Phraya River was surprisingly quick. The early hour of 5.30am may explain the lack of traffic. As our taxi-driver eases into the hotel driveway, the 27-year-old hotel exterior does not give much away. Inside, however, is a different story. The sound of cascading water fills the foyer. To the right just beyond reception, a waterfall cascades into two dug-out canoes stacked on top of the other. A second water feature filled with small clusters of white flowers and floating green philodendron leaves convey the tropical location and a sense of calm. 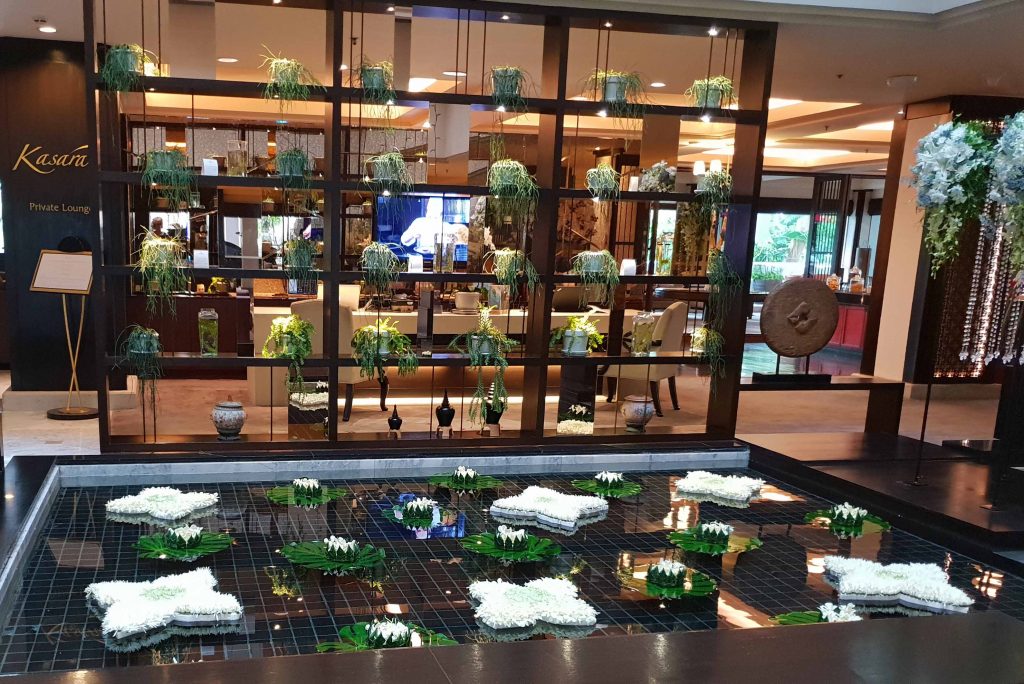 With an hour to spare before my spa appointment, I take the opportunity to explore the hotel grounds. The hotel’s central feature is the pool. A tropical oasis surrounded by lush vegetation (11 acres of greenery!)  My eye is drawn to the pool bar. A building with white columns topped by an orange tiled roof. Anantara claim to have the only swim to bar in Bangkok and my plan is to try it out very soon.

With camera in hand, as I’m wandering the hotel’s upper veranda I pass a family with young children. A young boy is standing on tiptoes, leaning over and pointing excitedly at something he sees in the pool area. I look over the balcony ledge wondering what has caused his excitement. Two water dragons (large lizards) are sauntering across the tiled surrounds of a pond, close to the pool’s perimeter. Their long scaly bodies slip into the water, silently disappear beneath the lily pads.

Hmmmmm, I wonder if they like the main pool? 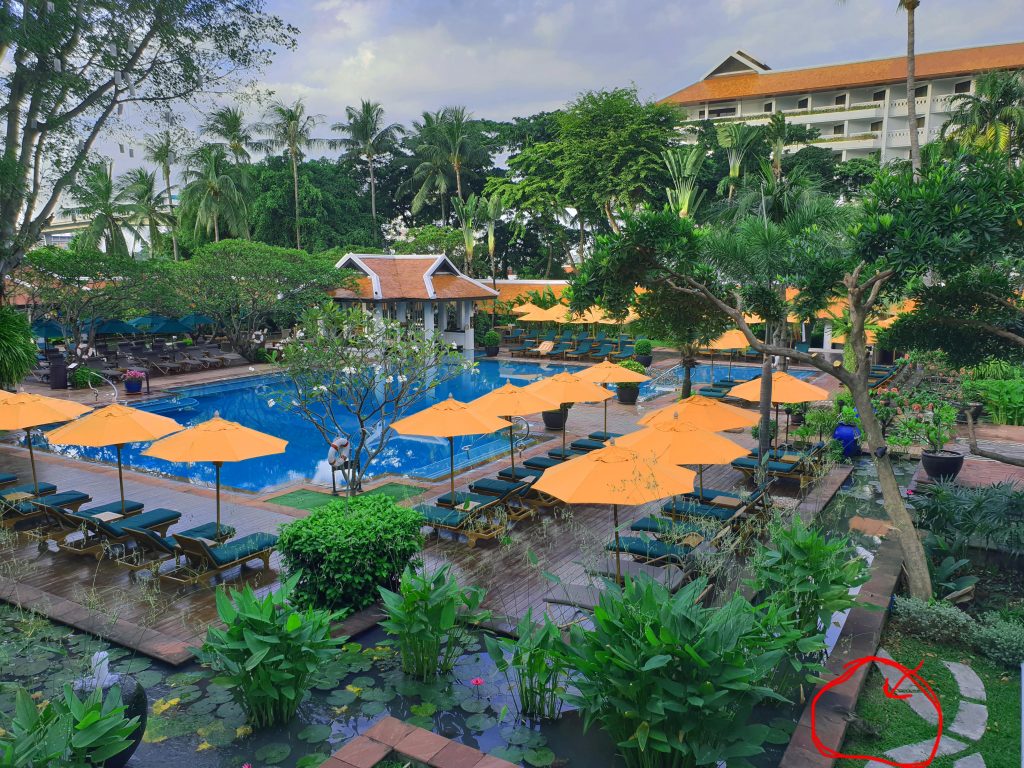 Anantara Riverside Hotel pool. Can you spot the lizard?

Relax and unwind in the Anantara Spa

Following my heavenly coconut and lime body scrub, I’m instructed by my therapist Suphee to shower. For the first time since leaving Brisbane, almost 24 hours later, I feel refreshed. My next treatment is a 30-minute body massage most of which I don’t remember, my body succumbing to deep sleep, waking (embarrassingly) with a snort. The finale is a foot soak and quick foot massage.

Sitting upright it’s easy to chat with Nok (Suphee she explains is her Thai nickname.) To my surprise, Nok informs me she’s 45 and mum to a 28-year-old daughter and a 20-year-old son. Her beautiful olive facial skin with not one trace of a laughter line had me thinking she was in her late 20’s!

I ask Nok for her recommendations on what to see in Bangkok. Her almond brown eyes sparkle and she says with a big smile, “you need to come back to spa for more treatments.”

Sounds very tempting Nok, but I must leave the Hotel comforts and explore Bangkok.

Take a boat ride to the Grand Palace

Bangkok is a thriving metropolis bustling at a pace you would expect of a capital city. I’m keen to explore and decide on the popular tourist attraction, the Grand Palace and Wat Phra Kaew – accessible via the adjacent Chao Phraya River. Transferring from the Anantara Hotel to the Saphan Taksin terminal (a central point connecting to many of Bangkok’s attractions) is easy. The Anantara guest boat departs every twenty minutes (from 6 am to midnight) and is located just beyond the hotel’s pool.  The concierge suggested I take the ‘Express Boat – Orange flag’ to the Grand Palace. It was a little confusing to work out which boat was the Express Boat (the orange flag is small) at the Saphan Taksin terminal.  But once I grasped the Thai system, it’s simple, you simply follow the queue.

Somehow I end up on the boat displaying an ‘orange’ flag.  I’m crammed in with other tourists and a handful of Bangkok’s eight million plus local population, including a group of five young solemn-faced monks cloaked in luminescent orange. Floating on top of the murky brown Chao Phraya River for 15 baht (50 cents AUD) is not only an inexpensive passage but an insight into Bangkok river life.

Nine stops later at ‘Tha Chang’ Pier (N9) I exit the boat with most of the tourists. Following the crowds past a jumble of small shops, a sign with the words ‘Grand Palace’ and a symbol of a castle indicate I’m heading in the right direction. The roads are barricaded to allow tourists safe passage and within five minutes I’m at the gate entrances. About 150 metres inside is the ticket office and I purchase an entrance ticket to the Grand Palace and Wat Phra Kaew for 500 Baht (around $20.)

The 94.5-hectare Grand Palace grounds were consecrated in 1782, to mark the founding of Bangkok as the new capital. The self-sustaining city within a city was the Royal residence for King Rama 1 (1782 – 1809) to King Rama V of the Rattanakosin Kingdom (1868 – 1910.) The Royal family now live in Dusit, but the impressive old-style temples and buildings including the resting place for the sacred Emerald Buddha (Phra Keo) are open to visitors from 8.30am – 3.30pm daily.

Warning! As a significant pilgrim destination for devout Buddhists and one of the most popular destinations in Thailand, expect to find a chaotic mass of tourists and tour guides. Unfortunately, it’s impossible to avoid the guides who shout to their groups, with minimal regard to anyone else attempting to enjoy the spiritual significance of the religious site. 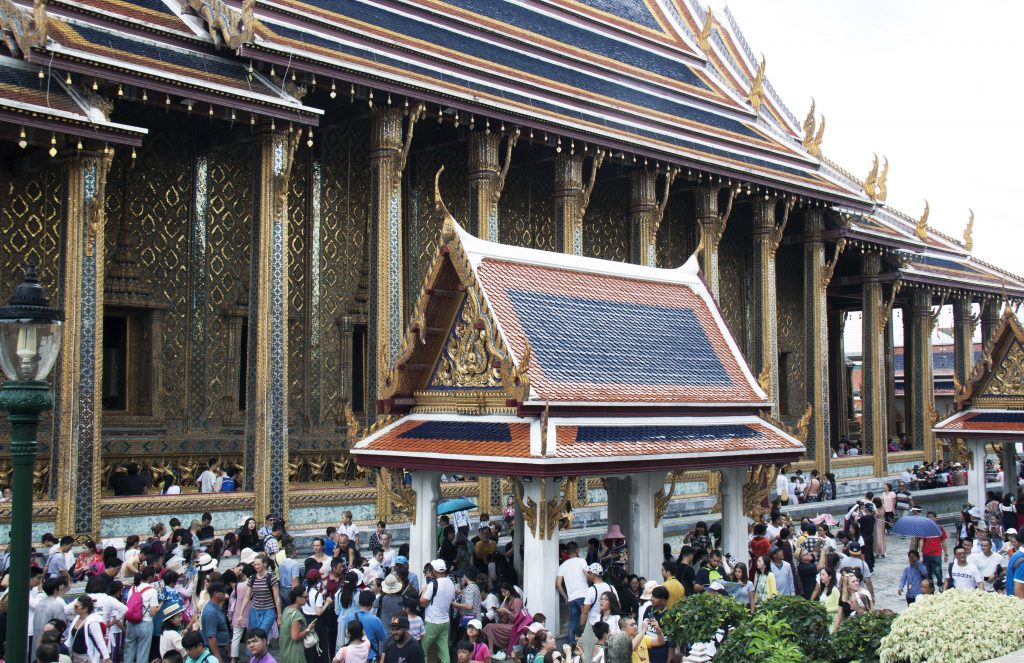 The crowds outside the Ordination Hall housing the Emerald Buddha

Visitors to Thailand should be respectful/considerate of the conservative nature of Thai culture requiring modesty in behaviour and dress. Before entering any sacred site, knees, shoulders and heels must be covered. And this was where those boho style Thai pants made a showing – en masse!  Maybe it was the heat, or the jetlag catching up to me, but once inside the Grand Palace walls I found the varied assortment of loose-fitting Thai style yoga (chong kraben) pants amusing.  Wherever I looked they were covering knees everywhere. 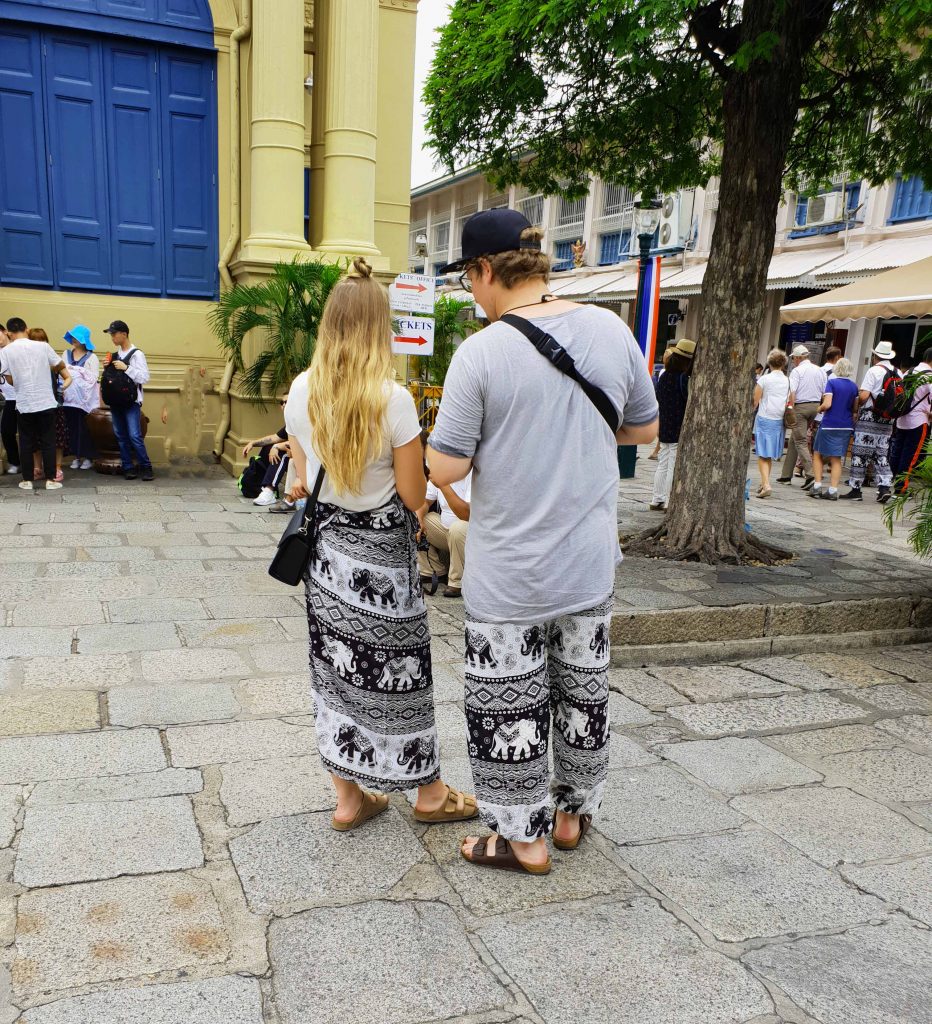 Families in their Thai prints: 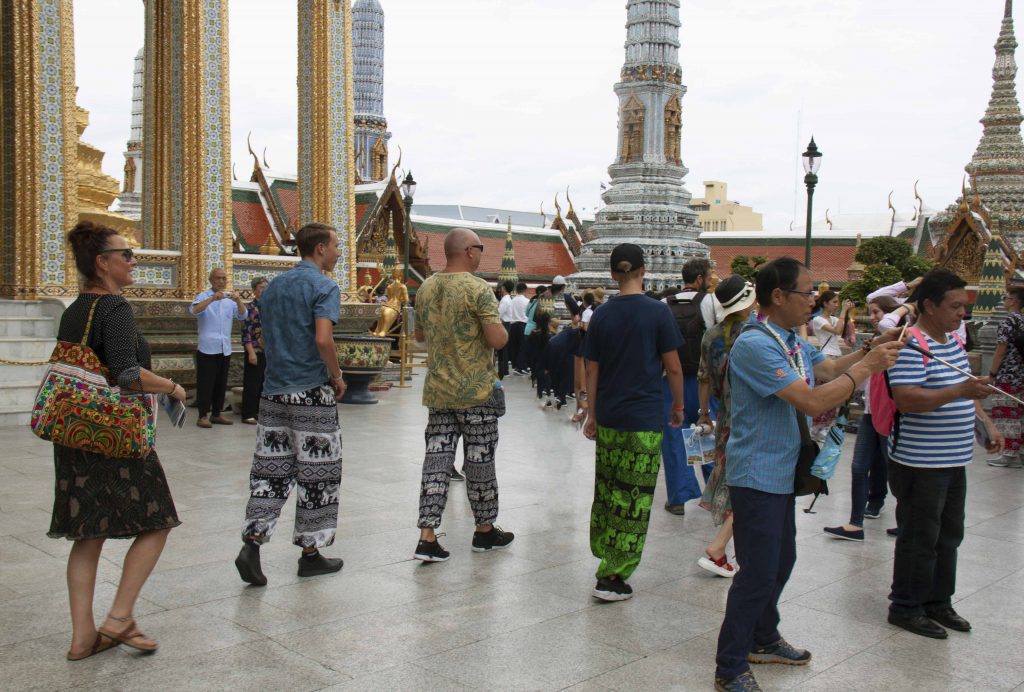 Older gents not caring about clashing colours (or checks.) 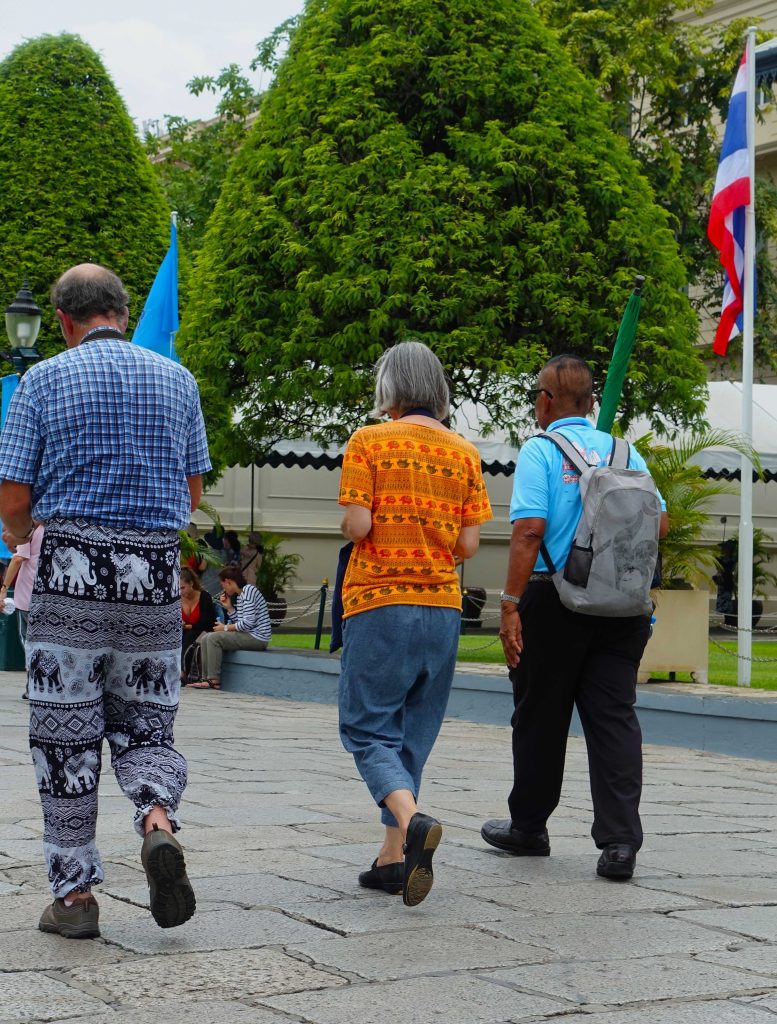 And then there is the suave Italian who manages the Thai pants with European style:

Rather than take a selfie in front of the golden Phra Si Rattana Chedi, which houses a piece of Buddha’s breastbone, I took photos of people in Thai yoga pants 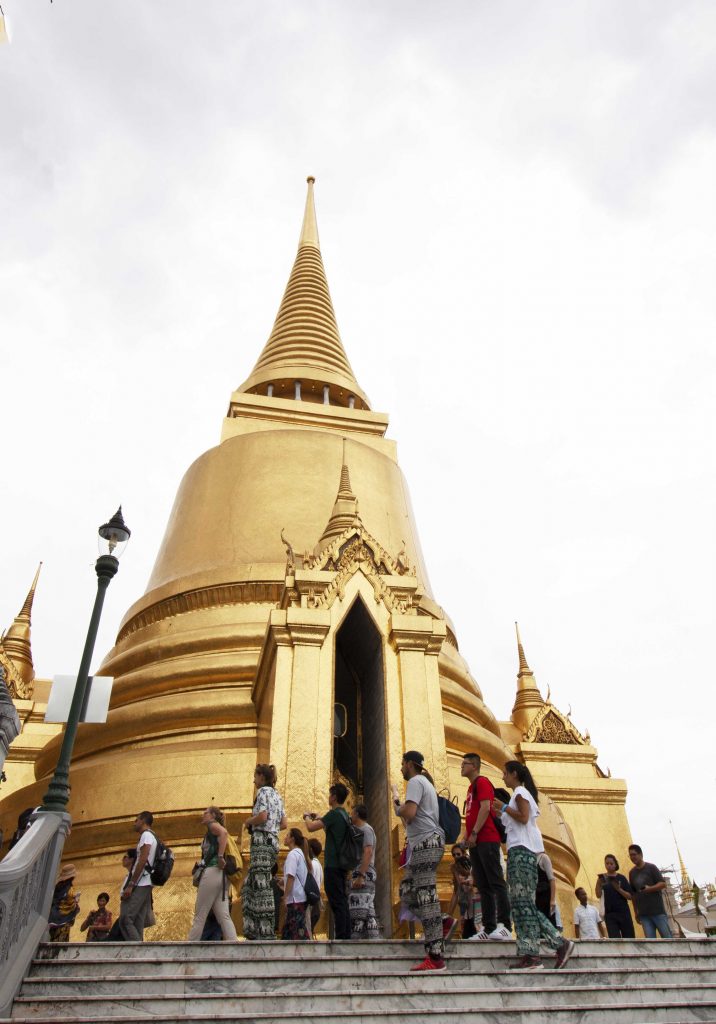 In the country dubbed the ‘land of smiles’ I couldn’t stop smiling. 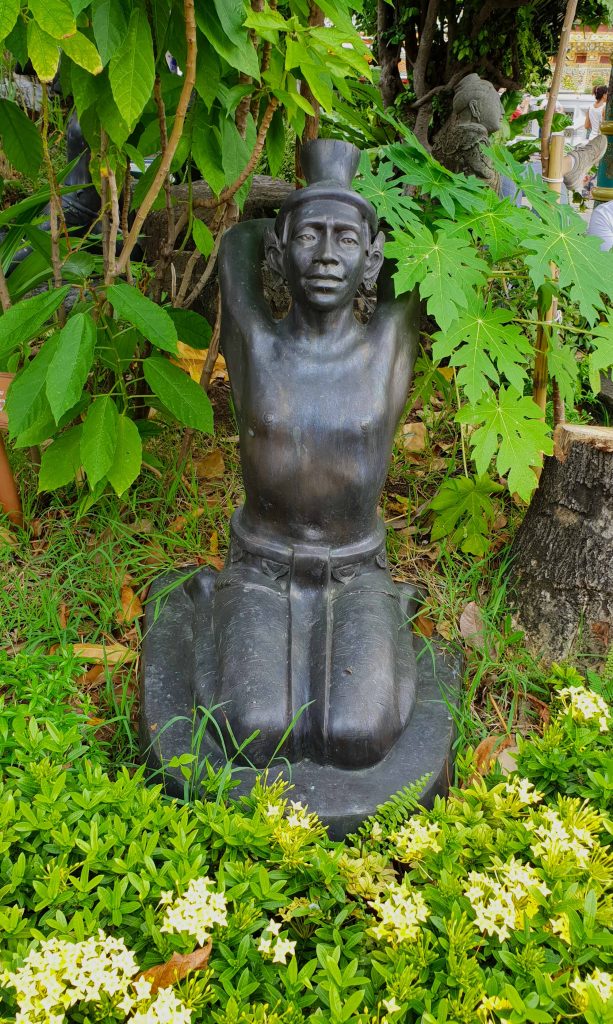 What do you notice when you visit popular tourist destinations?