Home » Destinations » Another side to Moreton Island

I’ve lived in southeast Queensland for the majority of my life and up until this year had only visited Moreton Island twice. Thanks to a few different stories I’ve worked on, I’ve been back three times in the space of three months and learned so much about this unique island only a 90-minute ferry ride from the mainland.

The opportunity to write a story with a 4WD angle was fun. It is about what arguably could be the greatest rubbish run in Australia, The story was originally published online in July 2017 in issue #039 of an Australian 4WD Magazine called Unsealed 4 x4. The article even included some of my (amateur) video footage, (March 2022: the link is broken I’m waiting for an update from Unsealed 4×4 on whether it’s live on their website)

I’ve also uploaded my story below, the layout is not as great as Unsealed 4 x 4 but the story is essentially the same.

Is this the toughest rubbish run in Australia?

or the ultimate 4WD adventure?

What freelance writer doesn’t love a good story? As I was researching Moreton Island, I came across a unique 4×4 experience. Tangalooma Island Resort currently holds the contract to collect and change the waste collection bins on Moreton Island. It’s no mean feat for a large two tonne Hino 4×4 GT 12 metre truck to get around the island to collect rubbish.

Moreton is a sand island with no sealed roads. The rubbish is collected on Monday, Tuesday and Wednesdays during the year and each weekday during school holidays. The rubbish run involves driving across beaches; through mangrove swamps; past shipwrecks and up (then down) sand dunes. And this is all in one day!

To the uninitiated, Moreton Island – or Moreton as the pundits refer to it – is close to Brisbane, only 35 kilometres from the mainland. Access to Moreton is via water (or air if using the small landing strip at Cowan Cowan.)  A ferry departs from Brisbane’s Pinkenba wharf and in 90-minutes drops passengers at the Tangalooma Island Resort. With over 170,000 visitors annually, Moreton is a popular destination for tourists.

But readers of a 4×4 magazine could care less about Moreton’s huge influx of tourists.  What’s more appealing to them about this island (37 kilometres long and eight kilometres at its widest) are its expansive beaches, diverse landscape and unsealed roads –  a mecca for 4×4 enthusiasts. I confess to not owning a 4WD but can sniff out a good story.  And this story has a smell associated with it (sorry couldn’t resist the pun) – it’s about rubbish.

It’s Friday morning of the Easter school holidays and I’m about to hitch a ride on one of the trucks to do the day’s rubbish run. As I’m waiting in the Tangalooma’s Island Resort’s reception, I meet Kate, a Kiwi from Wellington, who’s been working on the island for almost a year as a driver.  It was refreshing to find a female working in what I consider a male-dominated line of work.

“I’ve been driving trucks in the mining industry back home and I much prefer to be working outdoors,” says Kate.  But Kate was not to be my driver today, instead, I’m introduced to another Kiwi, Kale (yes as in the green leafy stuff) who hails from Fielding in New Zealand, (but was born in Australia.)  Kale is still learning the ropes and is supervised by Scotty – a veteran with seven years’ experience driving trucks on the Island.

Scotty joins us for the Bulwer run as the Hino Scotty was driving experienced braking issues on an earlier rubbish run. Scotty explains the truck’s specs and how they’ve been specially modified for the island’s conditions.

Flat tyres are an occasional hazard on the run. “It’s a big job changing the Hino’s huge tyres on sand,” says Scotty. “Something we prefer to avoid.”

I’m sure Scotty held back on describing exactly how he felt about changing tyres because I was in the vehicle. I’m hoping we won’t experience any flats on this journey, especially when Scotty laughs and says the tyre changing gear is in his truck back at the depot!

My first run is up the Eastern side of the Island to Bulwer. It’s around 20 kilometres in distance, is timed around the tide and takes two hours. (Today’s low tide is 12.06pm.) Almost needing a ladder, I clamber into the passenger seat. That height gives a great view from the cabin as we drive along the white sand, nodding to beachgoers making the most of the balmy April weather.  We pass the rusted carcasses of the wrecks, all that is left of fifteen old dredges and barges deliberately sunk to create a break wall for small boats.  They were deteriorating so badly, Brisbane City Council organised to have their tops cut off for safety reasons. Scotty tells me snorkeling around the submerged wrecks is popular. 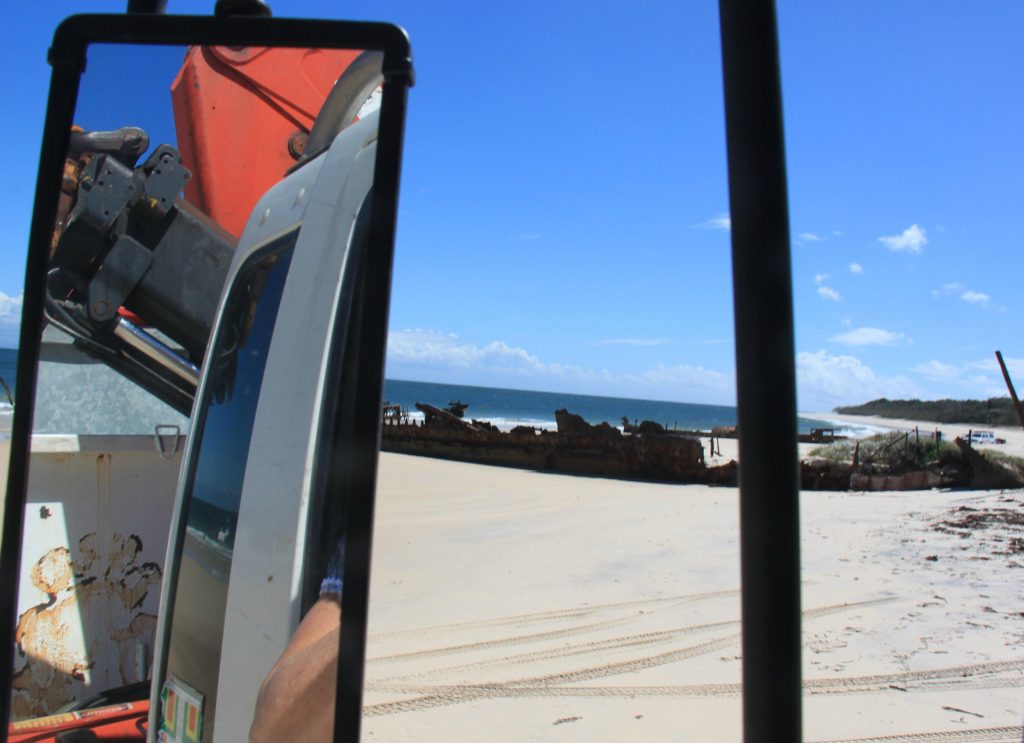 View of the shipwrecks from the cabin

Sights along the way

Part of the fun of the job is not knowing what they may come across that’s been washed in from the ocean. “We saw half a trawler one morning, but the strangest sight was a dead cow washed ashore after the 2011 floods.” A sperm whale on the other side of the island was a little out of the ordinary he adds. Parks and Wildlife have the job of removing such items, but the sperm whale skull was too large to remove, so remains on the island.

Passing a few beach houses, belonging to permanent residents requires the truck to slow to 40km/h. It gives me time to take some images of the broken remains of a couple of WWII gun placements. A reminder of the role Moreton Island played in WWII, defending the Australian coastline from potential enemy invasion. 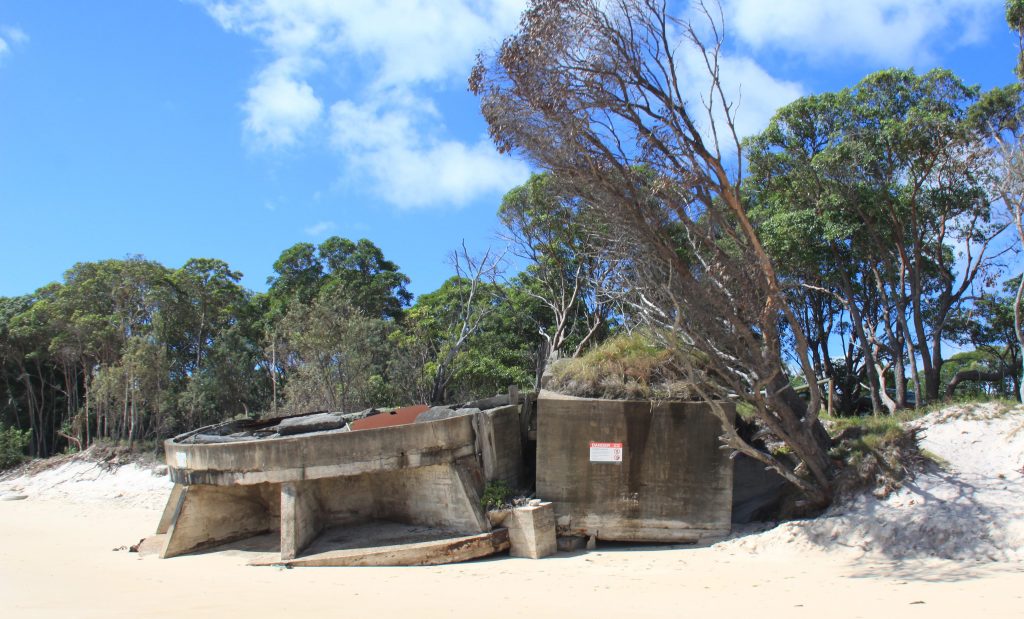 We drove inland from the beach into Comboyuro Point, a permanent campground for schools bringing kids to Moreton for a camping adventure.  Scotty and Kale operate the crane attached to the Hino lifting the two bins. 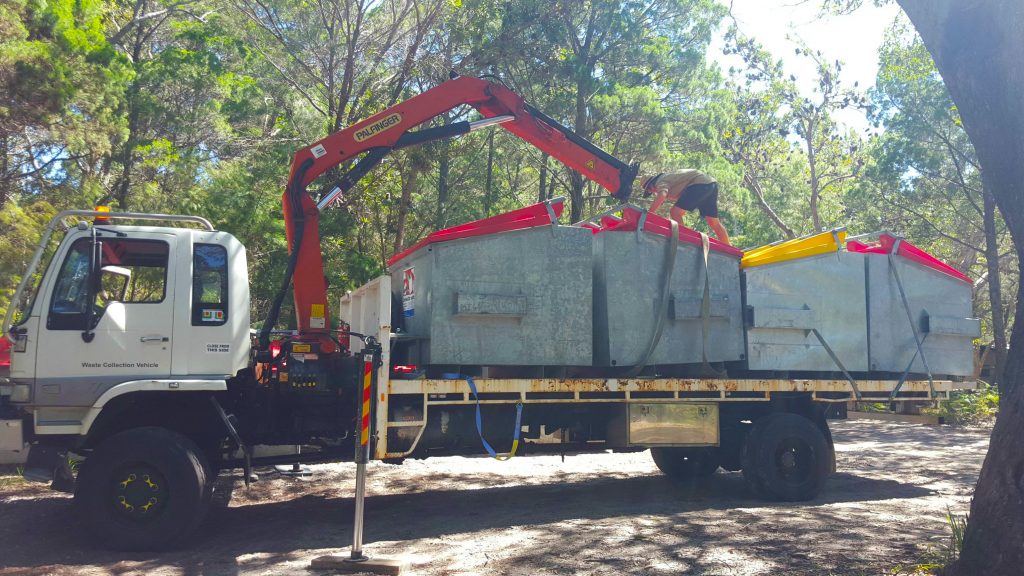 The track narrows and I feel the need to breathe in with only a few millimetres clearance on each side of the truck. We travel to Middle Road, which brings us back to the beach, eventually returning to the depot to deposit the bins. 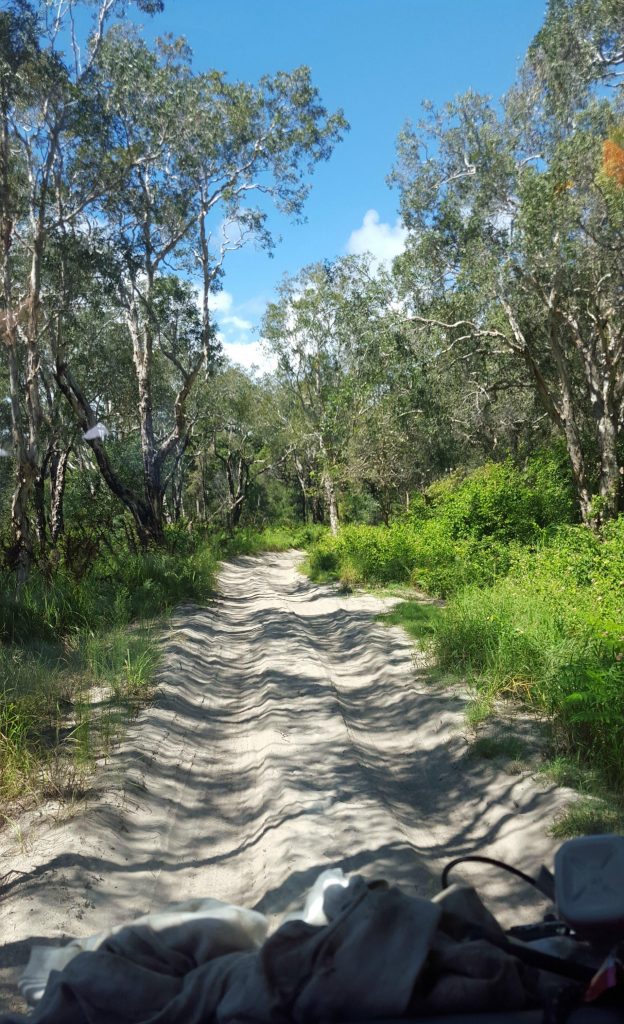 The township of Kooringal on the southern tip of the island is another rubbish run.  It’s a 25-30km round trip but takes a few hours due to the terrain covering beach, mangrove swamps and sand dunes (called Little and Big Sandhills for obvious reasons.) The track goes underwater during high tide.  A yacht that washed ashore in 2015 and was unable to be re-floated becomes another rusting relic to pass on the rubbish run. 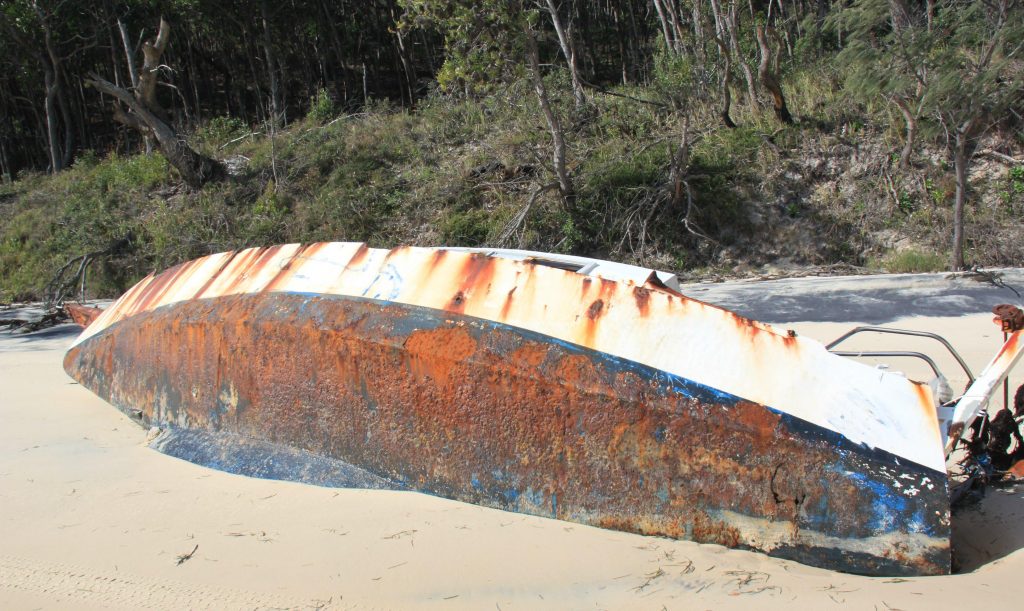 The lads tell me their daily challenges are watching the gears in the sand, the tight turns, the trees and the narrow tracks. Passing tourists is another predicament – they never seem to hear the big truck coming up behind them. They also need to be vigilant for kids playing on the beach, as they don’t think to look out for trucks before they “cross” the beach.

This small team of workers arguably may have the best “outdoor” job in the world.

“It beats working in an office,” says Kale. “Although I wouldn’t say that when it’s raining, there are some days when it’s miserable. But this day isn’t one of them.”

I have to agree.