The handler calls out, “Good boy Will, pick up.”

On command, Will’s 690-kilogram body thrashes in the water, one large foot claws the only solid object within reach – my Perspex chamber. I watch in awe as his gigantic jaw slowly opens giving me a ridiculously close view of his huge teeth. Before I could count those pearly whites, the rows of teeth disappear as the jaw ‘snaps’ shut with a ‘swooshing’ sound, which reminded me of the noise the last of the bathwater makes as it empties down the drain hole.

Will takes his reward, a tiny morsel of meat down into the watery depths.

These words convey my thoughts behind the face you see in the photo below, enclosed in my ‘cage’ at the Crocosaurus Cove watching Will (and Kate) circle around me.

My lovely friend Nannette who lives in Darwin said, “oh you have to do the Cage of Death before you head home.”

And what a memorable way to complete an incredible fortnight in the Top End, sitting in water being circled by not one, but TWO crocs.

This was my second visit to Darwin. I’ve shared some of my favourite experiences from my first trip in 2015 here but during this visit, there were a few new experiences worth mentioning. Getting up close and personal with a rather large saltwater crocodile was one of them!

Where to see crocs up close

Crocosauraus Cove is in Darwin’s CBD on Mitchell Street. Initially, I wasn’t going to bother, as it all seemed too touristy and I was concerned about the crocs being caged. I asked myself if it was morally wrong to go and visit somewhere the animals may be distressed?

I learned many of these crocs have been ‘removed’ from various locations. They represent the troublesome crocs – eating livestock or being too close to where humans live.  Many of them are relocated to Darwin Crocodile Farms but when they are too troublesome to co-exist at the farms, they would have been exterminated (euthanised) had it not been for Crocosauraus Cove agreeing to take them in.

As mentioned above my Darwin friends highly recommended the experience, so before my afternoon flight home, I found myself at the Crocosaurus Cove front entrance, right on opening time ready for my 9.30am ‘Cage of Death’ experience. 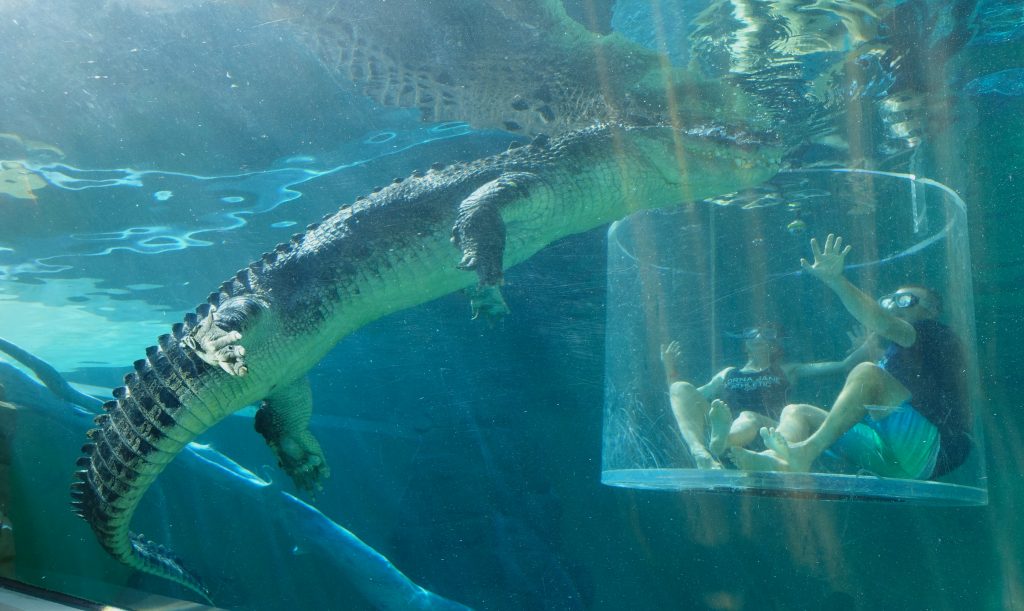 Crocosaurus Cove provides loads of educational information about crocodiles. I found out when in the water, a crocodile’s tail can propel them forwards at 15 kph over short distances – twice the speed of an Olympic swimmer. And crocodiles have salivary glands on their tongue that help them get rid of excess salt – so they can better tolerate salty water than their cousins the alligators who don’t have these salt glands and are confined to freshwater.

There are underwater aquariums – the manta rays are mesmorising to watch, a large reptile display and you can handle a baby croc (under supervision.)

The handlers at the feeding shows provide interactive information about crocs. And I know this is not how crocs would ‘naturally’ live in the wild, but because they have been problematic, they are no longer in the wild. I don’t want to turn this into a debate about whether you should or shouldn’t go. I chose to go and I found the experience fascinating and informative.

Although the tank jam-packed with juvenile crocs was a little startling. They don’t seem to be doing much other than floating around? (Living the life I guess?!)

Juvenile crocodiles floating around in their tank at Crocsaurus Cove

Where to find crocs

There are many places not far from Darwin where you can experience crocs. Adelaide River is about a 30-minute drive from Darwin CBD, or if you have more time a few hours drive to either Kakadu or Nitmiluk National Park will take you to some places where you’ll see crocs in their natural habitat.  And during my stay, a juvenile croc (about one metre in length) swam up to Darwin’s Mindil Beach (captured on social media and shared for all to see.)

If you can’t get out to see crocs in the wild, or are stopping over in Darwin en route to somewhere else and are time poor, Crocosaurus Cove offers the opportunity to see many, many, many crocs up very close – centimetres close if you want to climb into the ‘cage of death.’

At $170* for 15 minutes, the Cage of Death isn’t in everyone’s budget. (There is the option to buy photos, which costs extra.) But having viewed many salties in the wild in their natural habitat, on the Outback Floatplane Adventure in Sweets Lagoon on the Finniss River and on the Yellow Water Billabong, in Kakadu National Park, seeing them from all angles at the Cove helps with putting so much about these ancient creatures into perspective.

ALWAYS be sensible, heed the warnings, don’t swim in the water or go wandering along embankments where crocs are likely to lurk. You don’t want to appear on the front page of the Northern Territory News for all the wrong reasons!

This saltwater croc leaves his jaw open to cool himself – spotted during our cruise on Yellow Water Billabong at Cooinda, Kakadu National Park.

*The writer paid for her Crocosaurus Cove experience and all opinions in this article expressed are her own. 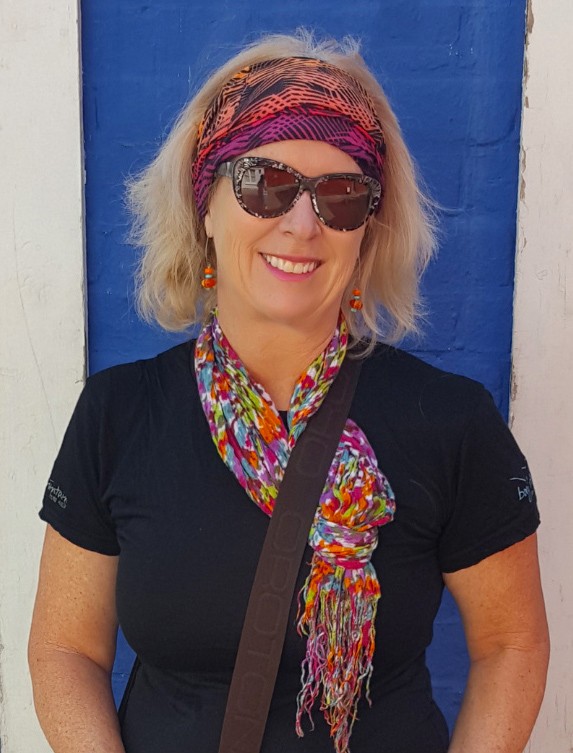