Where to have safe close encounters with an Australian crocodile

With over 100,000 salt-water crocodiles inhabiting Northern Territory’s waterways, there are plenty of places to see these Jurassic-like creatures. But there’s one place in Darwin where you can ‘dive’ with a crocodile. SAFELY!

Crocosaurus Cove on Mitchell Street in Darwin’s CBD is the only place in Australia to offer the Cage of Death. And whatever images those three words convey to you – I can personally vouch for it being a memorable experience

My cage of death experience at Crocosauraus Cove

The handler calls out, “Good boy Will, pick up.”

On command, Will’s body thrashes in the water, the large tail out of sight below the surface helps propel that 690-kilogram of crocodile flesh in a vertical thrust. One large foot claws the only solid object within reach – my Perspex chamber. I watch in awe as his gigantic jaw slowly opens giving me an insanely close view of his huge teeth. Before I could count Will’s pearly whites, the jaw ‘snaps’ shut with a ‘swooshing’ clap sound, which reminded me (weirdly) of the noise the last of the bathwater makes as it empties down the drain hole.

Will takes his reward, a tiny morsel of raw meat down into the watery depths. I look up and wonder how strong the chain is connecting me to the over-head monorail that wheeled me into position above Will’s water enclosure.

Fact: the saltwater crocodile has the highest bite force recorded of any living animal, thanks to his enormous jaw-closing muscles.

Hmmmm I’m thinking about that very fact as I’m eyeballing those powerful jaws. Just take a look at my face in the photo below, enclosed in my ‘cage’ at the Crocosaurus Cove watching Will (and Kate) circle around me.  That was one unforgettable Darwin moment! 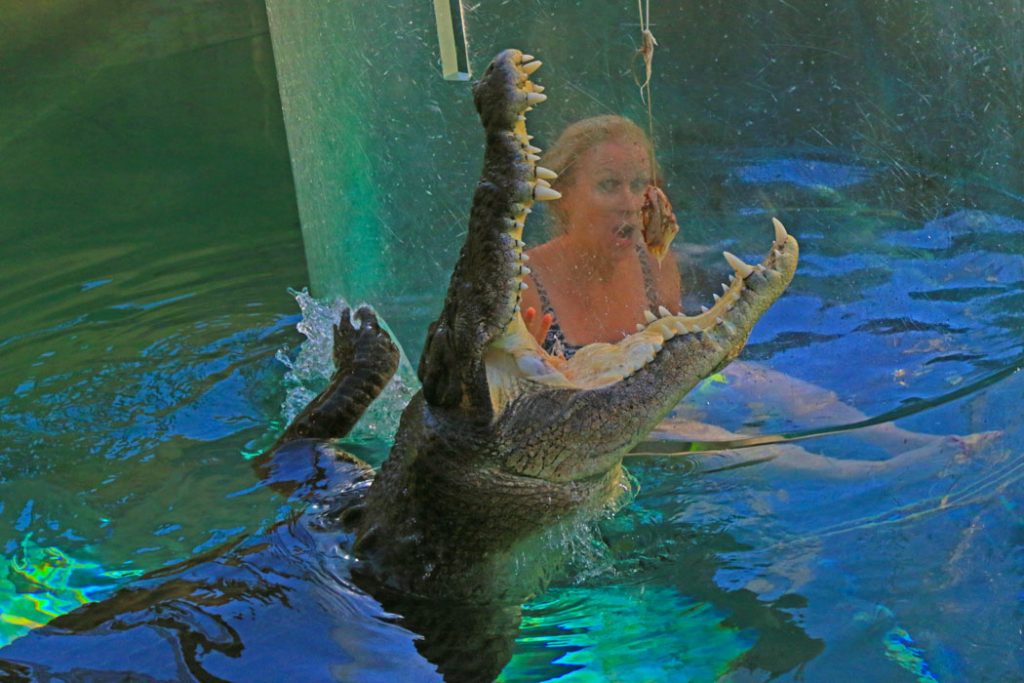 I’d been in Darwin for almost ten days, breaking up the time with a day trip to Bathurst Island in the Tiwis, and two trips to Kakadu National Park.

My friend Nannette who lives in Darwin said, ‘Oh you have to do the Cage of Death before you head home.’

And what a memorable way to complete an incredible fortnight in the Top End, sitting in water being circled by not one, but TWO crocs.

This was my second visit to Darwin. I’ve shared some of my favourite experiences from my first Darwin trip in 2015. During this visit, there were a few new Darwin experiences worthy of a mention. Getting up close and personal with a rather large saltwater crocodile was one of them!

Crocosauraus Cove is in Darwin’s CBD on Mitchell Street.

Two Darwin businessmen, Doug Gamble and Mick Burns established Crocosaurus Cove, which opened in July 2008. The popular tourist attraction occupies 5000 square metres in a three-story building, with eight purposely designed display pools that can be viewed over three levels. It’s incredible to observe the crocodiles from above, but wandering downstairs and watching them underwater provides an insight into how nimble (and comfortable) these prehistoric creatures are in the water.

Initially, I was hesitant about visiting Crocosaurus Cove, because I was concerned about the crocs being caged and it felt a little too touristy. I asked myself if it was against my ethics to visit somewhere animals may be distressed? But after learning that crocodiles wouldn’t be alive if it weren’t for the Cove helped alter my mindset.

“All our large crocodiles were once out in the wild,” explains Leanna Whyte, the Crocosaurus Cove’s Marketing Co-ordinator. “But if they prove to be a nuisance, either getting too close to tourists, fishermen, or farms, the crocodiles need to be relocated and eventually they found themselves with us.”

I learned many of these crocs have been ‘removed’ from various locations. They represent the troublesome crocs – eating livestock or being too close to where humans live.  Many of them are relocated to Darwin Crocodile Farms but if they are too troublesome to co-exist at the farms, they would have been exterminated (euthanised) had it not been for Crocosauraus Cove agreeing to take them.

“William was actually first spotted stalking people walking along Darwin’s popular Mindil Beach,” says Leanna.  Nicknamed “Houdini” after climbing into numerous traps to steal bait but escaping without getting caught, William was eventually captured and sent to The Darwin Crocodile Farm (also owned by Mick Burns.) But Houdini was too cranky for the Farm and ended up at Crocosaurus Cove, where he met Kate (aka Bess) in 2011, the same year William and Kate were married. (Hence their new ‘monikers’.)

William and Kate have been inseparable since and Kate has laid eggs each year they’ve been together. “We have some of their babies on display,” says Leanna. “When Kate lays eggs, we remove them from her man-made nest, mainly because William would eat the young once they hatched, which is also very common out in the wild. The removed eggs are transported to the Darwin Crocodile Farm and placed in a temperature-controlled incubator until they hatch approximately 88 days later.” 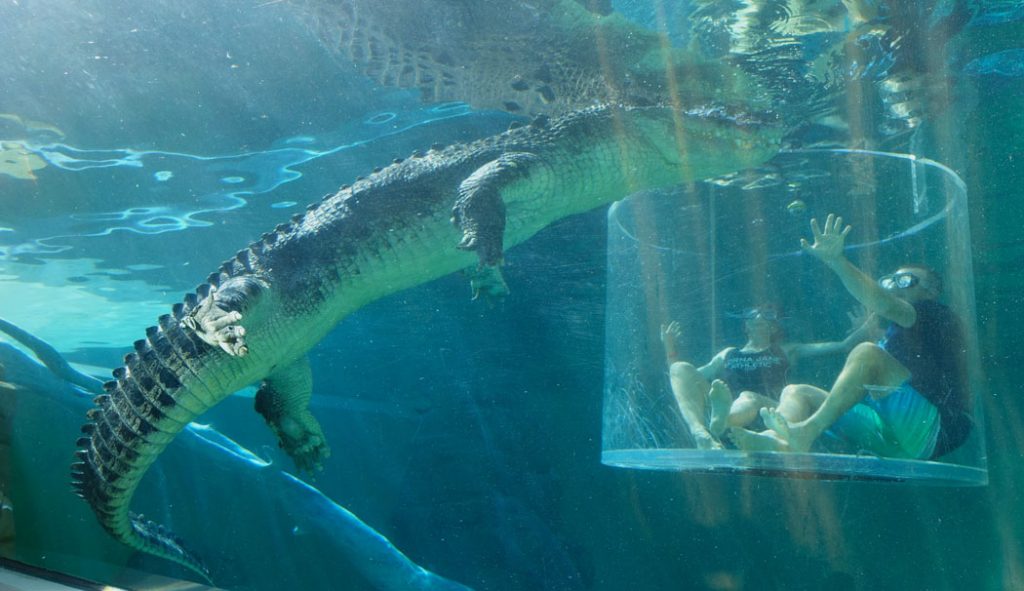 There are four enclosures each with its resident croc. Dana, one of the Reptile Handlers explains why they selected William and Kate for my Cage of Death experience.

“Often the crocodiles are slow first thing in the morning with the cooler water,” she says. “They take a while to wake up. But we can always rely on William, our show pony to perform.”

Some facts about crocs

Crocosaurus Cove provides loads of educational information about crocodiles. I found out when in the water, a crocodile’s tail can propel them forwards at 15 kph over short distances – twice the speed of an Olympic swimmer. And crocodiles have salivary glands on their tongue that help them get rid of excess salt – so they can better tolerate salty water than their cousins the alligators who don’t have these salt glands and are confined to freshwater.

Other attractions at Crocosaurus Cove

There are two Big Croc Feed shows daily. Watching the 11.30 am show with Wendall, I can’t believe how close the Reptile Handlers (Dana was one) are to this massive 5.5 metre croc weighing around 800 kilograms. Seeing Wendall emerge from the water, rise to take the bait, then recede quietly was awesome and eerie at the same time!

Inside the room with a large reptile display, kids can handle a baby croc (under supervision.) There are freshwater aquariums. The whip rays (cousin to the stingray) are mesmerising to watch. You can dangle a fishing line with a snack above a tank jam-packed with juvenile crocs (2-3-year-olds) and watch their reaction.

The handlers at the feeding shows provide interactive information about crocs. I know this is not how crocs would ‘naturally’ live in the wild, but because they have been problematic, they’re no longer in the wild.

If you can’t get out to see crocs in the wild in the Northern Territory, the Crocosaurus Cove is where you can observe them up close in a safe environment. Centimetres close if you choose to climb into the ‘Cage of Death.’

Tips for booking the cage of death

To avoid disappointment, Crocosaurus Cove recommends booking the Cage of Death prior to your arrival in Darwin. Especially during the peak season of May-August, all Cage spaces can be fully booked 3-5 days in advance. 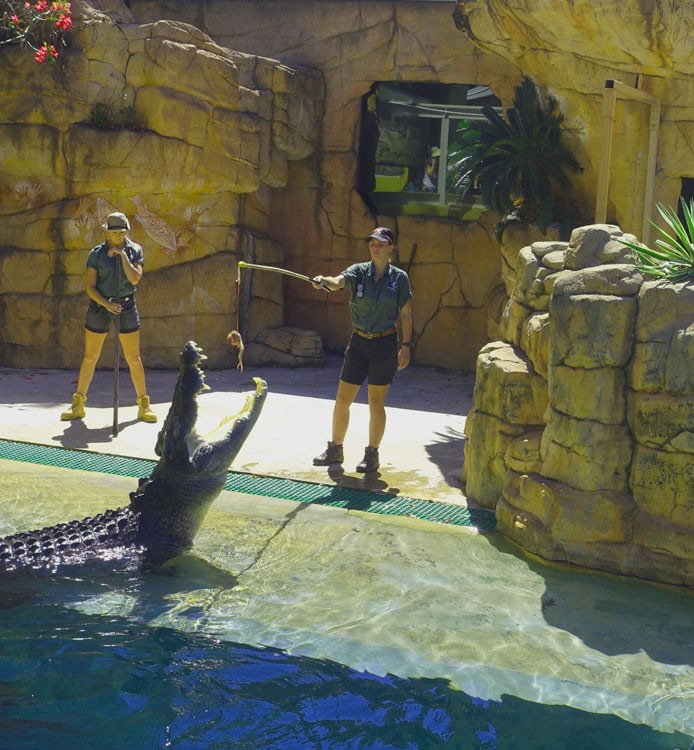 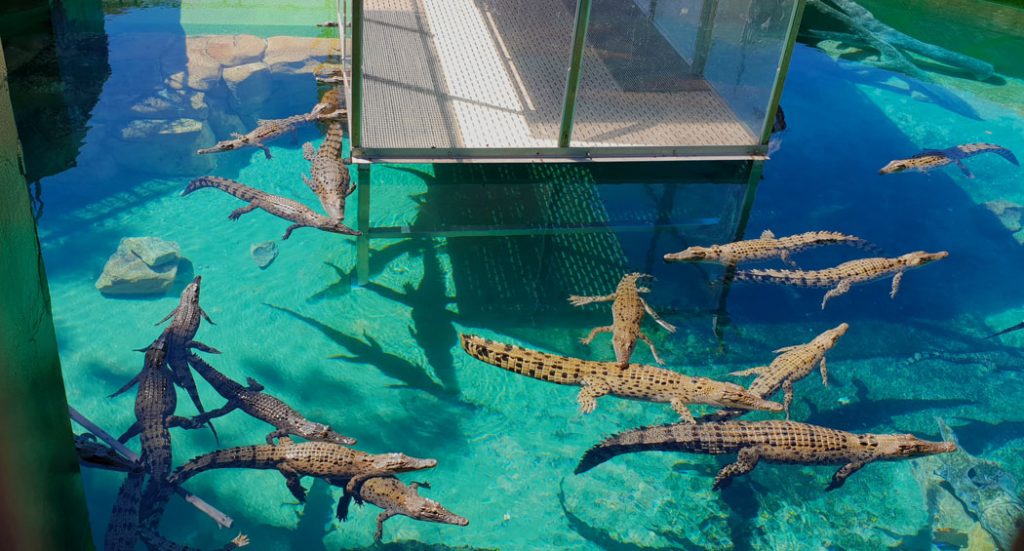 Juvenile crocodiles floating around in their tank at Crocsaurus Cove

Where to find crocs outside of Darwin

There are many places not far from Darwin where you can experience crocs in the ‘wild.’  But don’t forget crocs can come into the rivers and estuaries in Darwin. During my vacation, a juvenile croc (about one metre in length) swam up to Darwin’s Mindil Beach (it was captured on social media and shared for all to see.)  Makes me wonder why tourists think it’s ok to swim at Mindil Beach (admittedly the ones I saw were in the shallow water, but still!)

Adelaide River is about a 30-minute drive from Darwin CBD, where you can experience the Croc Whisper Pat on a Wallaroo Tour, or if you have more time a few hours drive to either Kakadu or Nitmiluk National Park will take you to some beautiful regions where you’ll see crocs in their natural habitat.

If you can’t get out to see crocs in the wild, or are stopping over in Darwin en route to somewhere else and are time poor, Crocosaurus Cove offers the opportunity to see many, many, many crocs up very close – centimetres close if you want to climb into the ‘cage of death.’

At $170* (2019 prices) for 15 minutes, the Cage of Death isn’t in everyone’s budget. (There is the option to buy photos, for an additional cost.) But having viewed many salties in their natural habitat, on the Outback Floatplane Adventure in Sweets Lagoon (closed down during COVID) on the Finniss River, and on the Yellow Water Billabong in Kakadu National Park, seeing them up close AND from all angles at the Cove only adds to the respect I have fo these ancient creatures.

And remember safety first when it comes to crocs

ALWAYS be sensible, heed the warnings, don’t swim in the water, or go wandering along embankments where crocs are likely to lurk. You don’t want to appear on the front page of the Northern Territory News for all the wrong reasons!

This saltwater croc was cooling himself down – spotted during our cruise on Yellow Water Billabong at Cooinda, Kakadu National Park

*The writer paid for her Crocosaurus Cove experience and all opinions in this article expressed are her own.