I’m not talking about the love of the Bachelor / Bachelorette kind. Rather where you’ll find ‘lovely’ experiences in this rural region thanks to the passion of the local people.

One thing I know about Queenslanders is we’re a resilient bunch.  We have an innate ability to draw on our inner reserves and stay strong through the face of adversity. And there have been a few tough periods over the last few years. Bushfires, floods and now this ongoing drought that doesn’t seem to have an endpoint in sight is testing the mettle of many – some more than others – depending on where you live in this vast state.

And I’m not saying it’s only Queensland doing it tough. Many parts of Australia are also suffering the catastrophic effects of the ongoing lack of water. But this story is about the region surrounding the town of Stanthorpe – population 5,000 and a 2.5-hour drive (230 kilometres) south-west of Brisbane.

Last week I visited Stanthorpe as part of a media contingent from Brisbane. Along with two other Brisbane based writers and a group of 10 American visitors who were part of a pre-Wine Media Conference excursion, Stanthorpe was home for two days.  Our little posse toured the heart of Granite Belt region. Over 48 hours we met a handful of locals – mostly winery associated. This resilient bunch is doing their darndest to ride out the long dry and ensure their district they love to the core, survives the relentless challenges mother nature is throwing out at them.

And what’s keeping them going?

It’s the one thing Aussies excel at in challenging times: community spirit. This strong unifying force was evident in every place we visited in the Granite Belt Region.

The Granite Belt Region is a small area, stretching across only 60 kilometres near the Queensland and New South Wales State Border. But this pocket is packed with wineries, a spectacular National Park, microbreweries, fresh produce like apples, olives and stone fruit. And then there are the tasty treats made using some of the fresh produce: cheese,  chocolate, jam and olive oil.

And it’s true they’re in the middle of a tough drought which fuelled the bushfires that have transformed the countryside leading into Stanthorpe into a blackened charred corridor. But the people of Brisbane and further afield should not believe the rumours about the region.

I’ve attached a link to help answer those questions and debunk the myths around the drought and bushfire.

There are a zillion reasons to jump in your car or hop on a tour bus (we travelled from Brisbane with Filippo’s Tours ) and head to the Southern Queensland’s Granite Belt Country.  Here’s where I found the love in the Granite Belt Region.

Rob Fenwick extends a warm greeting outside the Heritage Estate’s cellar door. Inside, his wife Therese does one better. Seated at a piano in the corner of the large tasting room she whimsically plays a tune. It sounds familiar, but I can’t quite place the name. She turns, smiles and lifts her hands off the keys. It’s a pianola. It belonged to the current winemakers’ grandmother. One of the many antique pieces proudly on display encapsulating the winery’s namesake – “heritage.”

The Pianola at Heritage Estate Winery

Therese and Rob introduce our group to a variety of tastings. Best to confess upfront I don’t have the palette of a connoisseur.

I drink wine. I enjoy listening to others who can deconstruct a wine and share the ‘flavours’ but I am not going to write about the varieties as a wine critic might do. I leave that to the experts.

That said, my palette is taken with their 2017 Chardonnay – which won wine of the year Winestate Magazine. (James Halliday awarded 92 points.)  The tasting notes indicate this “new age chardonnay” will reward cellaring – which even my fairly ignorant wine mind understands – it will improve with age.

Great. I purchase a bottle to add to my ‘home’ cellar.

Rob and Therese invite us to sit around a very grand rosewood and leather oval table. We learn it’s the original table used at the 1859 formation of the Queensland Government and an old photo of that moment is displayed on a wall nearby.

The beautiful antique table that seats 17!

We enjoy a hearty lunch paired with wine. The dessert, a decadent double chocolate mousse is a ‘lick the glass clean’ affair (no I didn’t – but I wanted to) and paired with a little drop of the Moonshine Madness. “Served as a side dessert,” announces Therese. 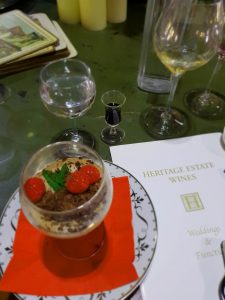 Double chocolate mousse with a dash of moonshine

And I try my first wine from the Strange Bird series.

What is a Strange Bird? It’s a marketing term created to describe a rare and alternative wine.

Wines with a production of less than one percent of the national total can be classed as a Strange Bird.  These are the ‘alternative varieties’ that go beyond the Merlot, Chardonnay and Shiraz we’ve all become familiar with. And the Granite Belt Region has produced a Strange Bird Wine Trail – to promote the unique varieties the high altitude destination produces. You can try names like Viognier, Roussane, and Fiano (all whites) and Tempranillo, Sangiovese, Malbec and Saperavi (the reds) are offered on the Granite Belt and Heritage Estate have three.  A Fiano, Marsanne (notes of honeysuckle and passionfruit – straight from the tasting notes 🙂 ) and a Verdelho (hints of tropical fruit.)

This winery is so popular it only opens its cellar doors for 10 weeks of the year to the public.  Most of their wine is purchased through an exclusive members’ only wine club with 600 names on the list.  Owners Brad and Cheryl Hutchings have relocated to Stanthorpe from the Sunshine Coast – to find the “dream” work project to see them into retirement. Brad as a former agronomist was looking for a place to get his hands back into the soil.

A glass of wine at Savina Lane winery

They built a new cellar door and “did what the French did, we went underground,” says Brad as we enter the cooler environment of their downstairs cellar.

For six and a half weeks they blasted through the granite earth to create a cellar below ground that is a “natural cooling system” for the wines.  After the winemaking and bottling is done, the bottled wines are cooled in this underground cellar – keeping the carbon footprint low.

Brad uses his agronomist background to practise sustainable viticulture. “I’m trying to keep the vines hungry,“ he says. “When the vines think they’re going to die they flower dramatically to replenish.”

I’m amazed. These vines are incredibly resilient, just like the people tending to them.

Cheryl teaches me something I’d not heard before. The vines are girls and the wine is masculine.

“And Tempronilo is the prettiest girl in the vineyard,” says Cheryl.

The sparkling lights around the cellar door twinkle in the evening light inviting us in. As do the two rescue dogs that bound over to greet each one of us as we alight from the bus.  Inside the cellar door, Mick Bourke pours a glass of Sparkling Roussanne (2016) to start the evening.  “There’s no one else I can really ask about Roussanne because no one else makes it,” declares Mike.

He shares their back story. He and his wife Ann left their Sunshine Coast home for a weekend of exploring on their motorbikes (or getting away from their seven kids was Mike’s excuse.) They stopped in the Granite Belt region, found this winery and ended up buying the place in 2010.

What a great story of impulse buying!

Their background is in the medical industry (Ann is a nurse) but they have turned to winemaking. Although Ann has had to return to full-time nursing work to help pay the weekly water bill – around $2,500 – to keep their livelihood (the vines) alive.

Jester Hill’s vines are fairly young – most were planted in 1993. And Mick’s Roussane is only nine years old. “It’s not hard to make the wine it’s harder to grow the grapes and get them to maturity, “says Mick.

“But the Granite area is very collegiate and encouraging.”

“A few years ago this Granite Belt area was awarded more medals per tonne crushed than anywhere else in Australia,” says Mike proudly.  “We are minnows as far as production goes with only two percent of the Australian production, but we punch above our weight as far as quality goes.”

The smiling face of Anthony Puglisi – the man dubbed the ‘Grandfather of Queensland wine’ greets us as we wander through Ballandean’s cellar door.  Not in person. He’s on a large billboard. This one-time fruit and vegetable grower had a vision in the 1960s to sell wine commercially.  His father, Alfio Puglisi has been converting excess table grapes into wine.

He and his wife Mary have turned their dream into a reality and with winemaker, Dylan Rhymer create wines people want to buy.  Now the Puglisi daughters, Leeanne Puglisi-Gangemi and Robyn Henderson manage the estate.

“We have the highest altitude wine region in Australia.  Less than 1% of Australia’s vineyards are grown above 600 metres and we’re at 800 metres.  That’s what makes us different.  That’s why we grow grapes here.”

Leeanne picks up a Strange Bird. “This wine is very rare 2019 Moscato Giallo,” she pronounces the wine with a perfect Italian lilt leaving no question of her heritage. “As far as we know there are only five producers in Australia and last year we were named as the biggest producer of this variety and last year we only produced 90 dozen.”

This rare variety, which has not yet come to Australia is sitting in front of us – waiting to be tasted. “It comes from the grapes on our block’ Leeanne says. “Golden, aromatic with a slight lemony note on the nose, a little more citrus than a normal muscat.”

Thank you Leeanne. As I take a small sip your words help describe the tastes swirling on my tongue.

No one spits out the Moscato Giallo. (Well, maybe the Americans do, as they are pro wine-tasters.) The Aussie girls, nod in agreement, this one is a special Strange Bird!

“We are winning critical acclaim here and overseas. One of my wines just won third in the world at a comp in Georgia 18 months ago.  But consumers in Australia don’t know we have great wine in Queensland because it’s not promoted.” Leanne states shrugging her shoulders. “When people think of Queensland they think of beaches, not wine.”

Hard to get your head around that after tasting so many lovely wines. So good in fact, I’ve bought a few bottles to take home and share with friends.  And I’ll be telling them where they need to head for a summer weekend or mid-week getaway.

So what are you waiting for?

A few good reasons to come to the Granite Belt. To taste the remarkable wines. Eat the delicious local produce.  Enjoy the stories and hospitality.  Support the locals.

And drink the wine voted the third-best in the world.

These are only ‘some’ of the lovely experiences found in the Region. Two days only allowed me to scratch the surface of the experiences awaiting the visitor to this rural region.

I stayed at Grovely House Bed and Breakfast. Run by Faith Simon who lives elsewhere but pops in during the afternoon offering afternoon tea and back for a cooked breakfast in the morning.

Oh, and she makes a mean jam too (which you can purchase before you leave.)

For further stories on the Region from fellow writers on my trip take a look at:

Christine Retschslag The Global Goddess Bursting Back from the Brink

All opinions expressed are my own.