Living in Brisbane I am spoilt for choice regarding weekend escapes. Too often I head interstate or overseas, rather than choosing the adventurous and beautiful places closer to home. Today, I discovered one of nature’s unique places, only an hour from home.

Reality TV lifts many unknowns to celebrity status. Can it help to make a National Park famous? Thinking about making a trip to Springbrook National Park, I googled the place and as Google searches often do, a few links appeared. This was one of them:

“I’m a celebrity, get me out of here was filmed in Australia at Springbrook National Park, Gold Coast, Queensland. The show follows the lives of chosen celebrities living in jungle-like conditions with little or no comforts for a period of 15 to 21 days.”

This World Heritage-listed National Park has been on my doorstep for 40+ years, yet it was only recently I decided to make the one-hour car trip to experience this place. Had I known an international TV reality show was filmed there, would I have been motivated to visit Springbrook sooner? Probably not. But it would have given me something to smile about when hiking the many rainforest trails. The status of celebrities and the lengths they go to when their star is waning.

The main reason I finally made the effort to visit Springbrook was the comments by friends and family. When talking about good nature hikes in the area, they would mention Springbrook as a great place for hiking. According to the Australian Government website * The Gondwana Rainforests of Australia include the most extensive areas of subtropical rainforest in the world. There are few places on earth containing the number of plants and animals which remain relatively unchanged from their ancestors.

Originally listed in 1986 covering rainforests in New South Wales, the World Heritage area was extended in 1994 to include rainforests on the Queensland side of the border. The protected areas in this property include Lamington, Springbrook, Mt Barney, and Main Range National Parks. The combined land mass extends over a massive 366,507 hectares (59,223 hectares are in Queensland.)

With the South East Queensland weather turning slightly cooler and the iridescent, cloudless blue sky beckoning, on this autumn weekend day in May I headed to the world’s largest remaining area of undisturbed subtropical rainforest.**

My sights were on the 6,197 hectares Springbrook National Park, nestled in the Gold Coast Hinterland and easily accessible by car either by heading south from Brisbane (or north from the Gold Coast) along the Gold Coast Motorway.

The Springbrook plateau section borders New South Wales. The western section adjoins Lamington National Park, where O’Reilly’s and Binna Burra are found, (places to discover another day.)  A day trip was sufficient. I had no desire to camp out overnight – although there are amenities for anyone seeking the camping experience.

From the car park, a few vantage points on the Springbrook plateau section provide incredible views of surrounding ranges, towards the coastline. These views are easily accessible. A short walk brings you to a vista like this:

At 900 metres above sea level, the temperatures are usually cooler on the plateau. The shady rainforest canopies provide a welcome refuge from the sun while viewing the interesting native vines, palms and the fascinating strangler figs.

Some Walks are closed:

Due to storm damage in the preceding months, Parks and Wildlife advised the Warrie Circuit; Purling Brook circuit (eastern side) and the Warringa Track were closed. Sadly this cuts down a longer trip for any dedicated bushwalkers. The Warrie (Aboriginal word for ‘rushing water’) Circuit is a 17kilometre hike which follows the base of the Canyon Cliffs to Goomoolahra Falls.

I was able to access the stunning Purling Brook Falls via the Western side of the circuit. Prior to the track closure, the circuit involved actually walking behind the falls, which would be an amazing experience. Noting the fallen rocks and trees from the landslides blocking the circuit path and a sign advising the track is closed until further notice – its a backtrack to the car park in the same direction via the 265 steps. A decent cardio work-out.

I passed many foreign-speaking tourists hiking the Purling Brook paths. Maybe the Reality TV Celebrity show has lifted this natural pocket’s profile and injected some international attention? Their enthusiastic chatter and laughter broke the serenity, as did the occasional call from the native riflebirds and catbirds.

From Purling Brook Falls,  there is a four-kilometre drive to the Canyon Lookout, where an easy 20-minute easy walk takes you to Twin Falls.

These have their own special beauty, but personally, I felt the sheer size and volume of Purling Brook Falls, was more spectacular.

The Natural Bridge (24 kilometres from Purling Brook Falls) is worth the effort if time allows. A one-kilometre easy walk through the forest from the car park brings you to the naturally formed arched cave, where the water plummets thunderously into a dark billabong below.

Walking into the cave at dusk, on the rocky ceiling and walls, I see tiny pinpricks of blue light emanating from the glow worms. The miniature glowing dots, an incredible natural phenomenon, was a “wow” moment. Bringing a torch on this walk may have helped with the stumbling steps back to the car, the dim moonlight our only guide. But this was a spontaneous moment and in its unplanned manner, was all the more enjoyable.

Such a beautiful, historical place only a short drive from Brisbane or the Gold Coast. I can now count myself as one of the estimated two million visitors** (annually) to this special part of our world?

Springbrook National Park should be experienced at least once in your lifetime and hopefully not because of a TV Reality show.

The view from behind Purling Brook Falls

For anyone into sweet treats – make a stop at the Fudge Shop en route to Canyon Lookout!  Located at 3 Lyrebird Ridge Road, Springbrook. (They offer coffees as well). Ignore the unassuming looking house from the outside, the fudge is delicious and sweet and reasonably priced.  (Spot the alien standing in the corner!) 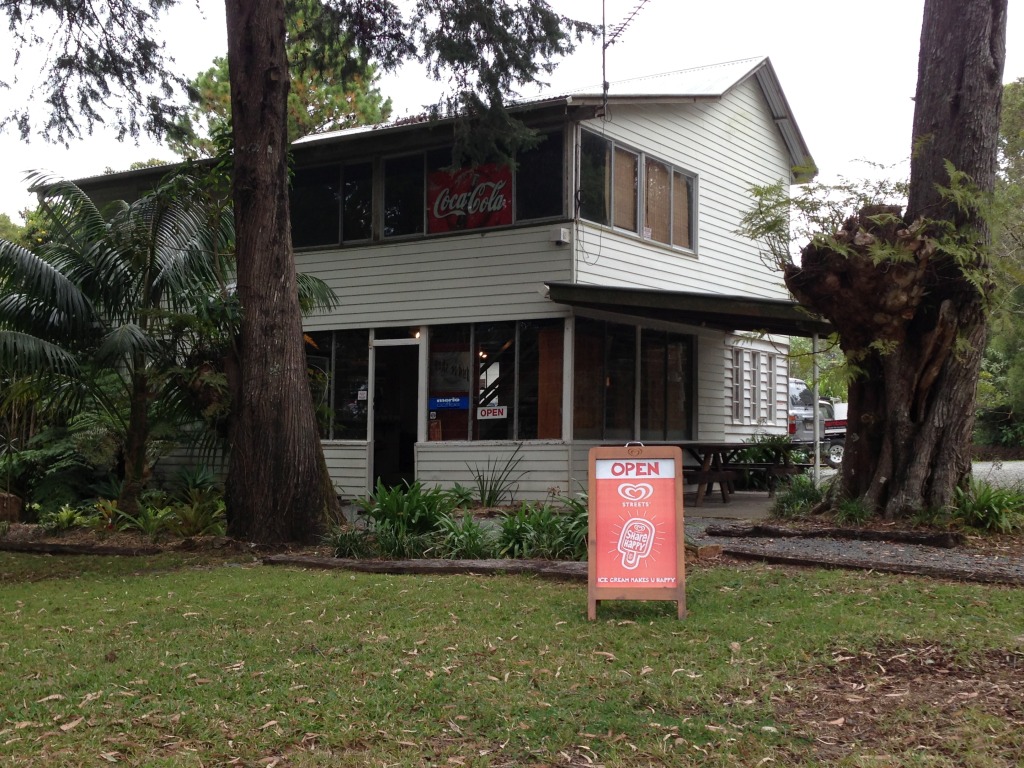