What we did in Melbourne in less than 30 hours

This was my three lad’s first trip to Melbourne – a quick fly-in, stay overnight week-end. The challenge was what we could see and do in a short time to give the boys:-

My boys are aged 16.5, 12 and 12.  The trip was actually the twin’s birthday present. They turned 12 the day before we flew out and were presented with a surprise trip to Melbourne to see their favourite soccer team Real Madrid CF vs AS Roma – a friendly soccer game at the MCG.

Travel with the ex-husband

I travelled with my ex-husband (this trip was about our kids and creating memories.) He had booked these tickets five months earlier with the foresight recognising what an “unforgettable” birthday experience this would be for the twins, a day after their birthday.  And it was a great surprise despite a few dramas leading up to the day. Trying to keep their presant a secret; attempting to explain why they can’t have a party with their friends on the Saturday after their birthday, thankfully these were forgotten about on the morning of their birthday.

Surprises are a great idea – but anyone who has organised one knows how they can bite you in the proverbial leading up to the surprise! 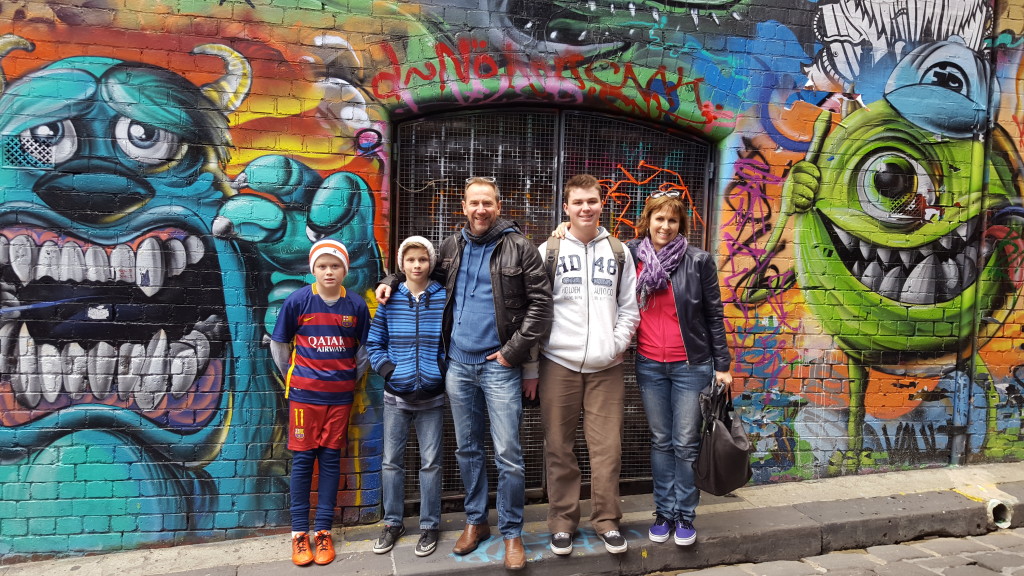 Melbourne what we packed into our time there

We flew into Melbourne at 10.30 am. With our family of five, the best option to get to the hotel was via a cab. The airport shuttle is $25 per person – our maxi taxi to Hotel was $65.  Adara Hotel in Richmond was booked because of its proximity to the MCG.  (10-minute stroll up Bridge Street.) 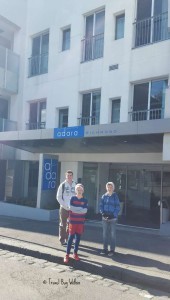 A quick check-in, dump bags and head off with street map in hand to discover Melbourne’s CBD.  With the weather a pleasant 15 degrees, it was an easy 20-minute walk to the centre of Melbourne CBD where we intended to check out the graffiti walk. Doing some pre-trip research, I figured street graffiti interests kids – especially if it’s slightly rebellious looking. Walking along Flinders Street we turned right and found Hosier Lane near Modiva Restaurant. From a prior trip to Melbourne I knew this area hid a few laneways of street art. Hosier Lane received a big tick from the boys and provided many photo opportunities. 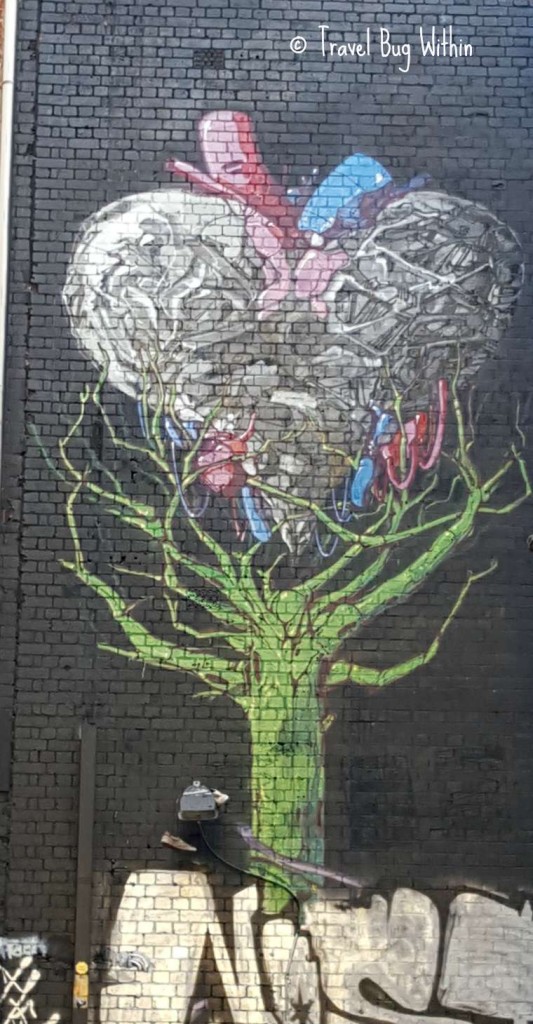 With tummies growling (plane food nowadays never seems very generous) it was time to make a food stop. So many choices. Mum was hoping the lads would like the cafes at the Laneways, as it was close to Hosier Lane and offers a unique Melbourne food experience.

Entering the narrow cobblestone streets, jammed with people and no cars, cafes tumble out on to the laneways. It was a challenge to locate a café to accommodate five of us. It was midday and lunch time crowds filled many of the tables inside and outside. We spied a table near the Issus Café and Bar and grabbed it – can’t hesitate in making a seating choice at this time of day.  The passing people traffic do wander past fairly close to your table and for the adults, this is part of the Laneways atmosphere and charm – people watching. But our younger two felt it was a little crowded and busy – made a few complaints. But there were no issues with the food. 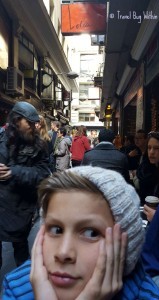 A little squeezy in the Laneways 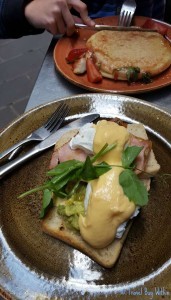 Tummies satisfied – where to next? It was a “no” to more graffiti artwork (I was hoping to wander some of these graffitti streets ) so we decided on a walk along Collins Street in search of what I consider to be one of the greatest Aussie chocolate experiences – Haigh’s chocolates. We found Melbourne’s first Haigh’s chocolate retail store (according to the effervescent shop assistant inside!) 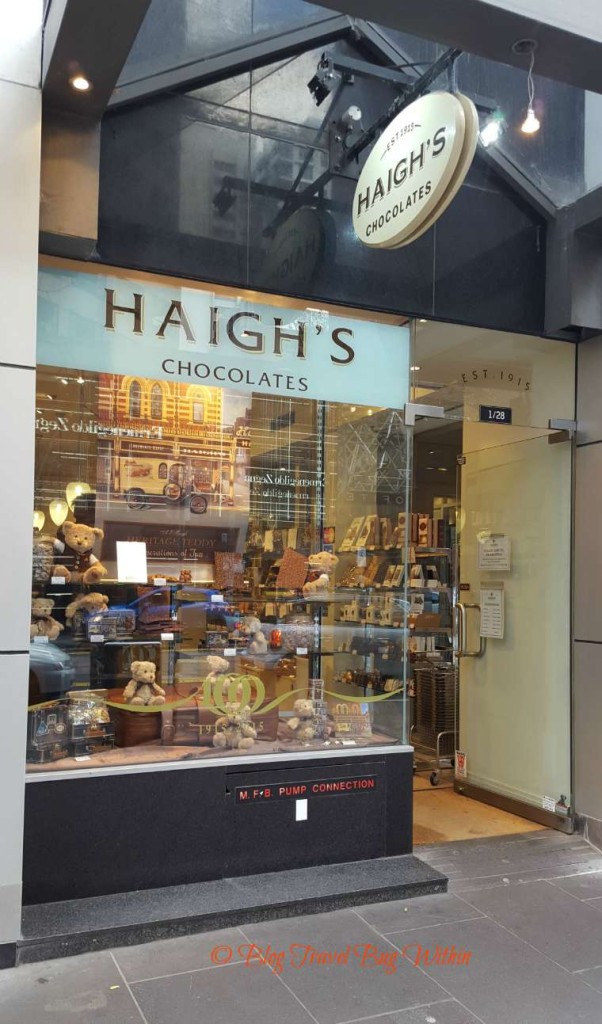 With a sugar rush from the chocolates, we wandered over to the Bourke Street Mall and watched a street performer before ending up at Rebel Sport. The twins wanted to look at soccer boots of course. Apparently their range of boots is better than Brisbane!

When Dad felt it was time to take the twins back to the Hotel for some R & R before the big match at the MCG, Mum and older son seized the opportunity to shop for a few hours. A quick dash back to the Hotel to change and rug up for the night ahead at the MCG. 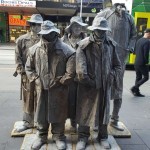 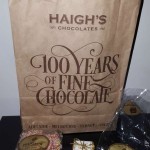 Did I mention how much I love Haigh’s chocolates?

My childhood with memories of many hours in front of the TV watching cricket matches played at the MCG. I consider the MCG the holy grail of Aussie sports grounds, so I was just a little excited to experience the MCG for my first time! 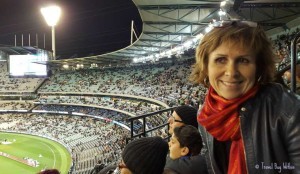 Excited to be at the MCG 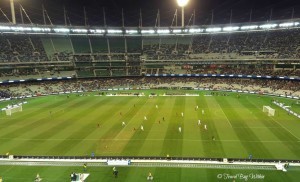 The seagulls mingled on the grass as they had done on TV during cricket games. Paper planes flew through the air at ‘quiet’ moments during the game.

Sadly, these diversions were more entertaining than the soccer game. It was a ‘friendly’ match and I wondered if the two team’s hearts were really in it. A nil draw at full- time resulted in a penalty shoot-out. When a Real Madrid player finally missed, the game was won by AS Roma.  No matter – the boys saw their hero Cristiano Ronaldo play – even if it was only 20 minutes before he was taken out of play and “rested.”

The next morning was a slow start. The weather forecast advised it was chilly – one degree in Melbourne.  A tram trip to St Kilda was on the agenda and once Miki cards (public transport currency) were purchased from a 7/11 store, we headed into the city by tram, then out to St Kilda. Occasionally on public transport, you’ll have the opportunity to meet some characters. And we did on the tram. The Egyptian-Italian 80+-year-old who proudly boasted to those around him he spoke four languages! His recollections of Egypt in WWII kept us entertained until he departed at his stop.

At St Kilda with no plan of where eat, we strolled down to the boardwalk, towards a couple of restaurants offering tables in the sun. Republica appealed and with hot chocolates and mochas ordered to and the boulevard to people watch, it seemed the perfect place to enjoy our Sunday morning. The breakfast wraps my eldest and I ordered were delicious. 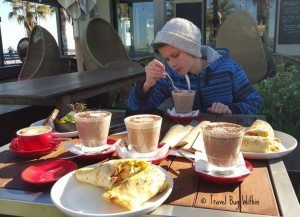 Republica at St Kilda – must try these breakfast wraps

We took the tram to the Arts Precinct, wandered around Southbank and walked the iconic Princes Bridge over the River Yarra. We visited the Eureka skydeck for an aerial view Melbourne from the 88th Floor. Clear views of the MCG, Rod Laver Arena and the Soccer stadium from this 360-degree viewing platform (it helped we had a clear sunny day.) Cost $53 for a family of five – worth it and the boys loved it. 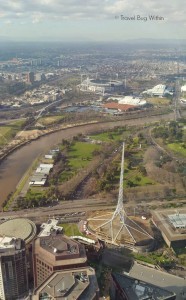 View from the Eureka Skydeck

Time to head back to the hotel, collect luggage and return to the airport where I race to baggage services and retrieve my SLR camera (accidentally) left on the plane the day before. HUGE relief from me and big thank-you to QANTAS staff for handing it in. A much-deserved wine for Mum and Dad in the QANTAS lounge before heading home to Brissie.

Melbourne in less than 48 hours. It can be done and the memories hopefully will endure.  Blogging about it makes sure of that!

Did we give the lads a taste of Melbourne? I think so. And will they return? I’m sure.

Ever been to Melbourne?

What are your favourite places?