The airport security alarms were ringing and my 83yo mother couldn’t figure out what was setting them off. Removing her shoes, she made her third attempt through the x-ray booth. With the alarm ringing yet again, her face lit up. “It must be my hips,” she said smiling. Without a care in the world and oblivious to the line-up of travellers behind her waiting to go through security my mother was thrilled with her light bulb moment. She hasn’t travelled through any airports since a double hip replacement three years ago, conveniently forgetting about the pieces of titanium her hips were harbouring. I was wondering what other interesting moments awaited our mother and daughter weekend away.

So why Melbourne? The Royal Military Tattoo of course!

Mum has been a fan of the Royal Edinburgh Military Tattoo for decades. Like so many of her generation, each new year she would plant herself in front of the TV to watch the TV replay of the Tattoo being screened around Australia. The event actually takes place in Edinburgh in the middle of the year, but for some reason, Australia replays it six months later. The Tattoo was touring Melbourne and Auckland for a limited time in February 2016. Knowing it’s always been something Mum would love to experience, but was unlikely to ever get to Scotland to see, Melbourne was the ideal alternative.  She was given a ticket to the tattoo for Christmas. The only catch someone had to go with her!

Although I wouldn’t have placed seeing the Royal Tattoo as high on my to-do list, I knew Mum couldn’t go on her own. Time for some quality mother/daughter fun. And I love Melbourne, so any excuse to escape down south was fine with me.

I booked the Windsor Hotel on Spring Street – central and full of old-world charm. Didn’t realise at the time of booking, but Mum informed me her father (my grandpa) stayed at the Windsor Hotel on business trips (he was Brisbane-based.) So this would be a nostalgic visit as well. A quick check of what was on in Melbourne over the weekend (apart from Valentine’s day on the Sunday) revealed a few musicals, including Georgy Girl – The Seekers Musical.  We’re both huge Seekers fans so we made the decision on the flight, to visit Her Majesty’s Theatre on Exhibition Street as soon as we arrived and purchase last-minute tickets to the show. 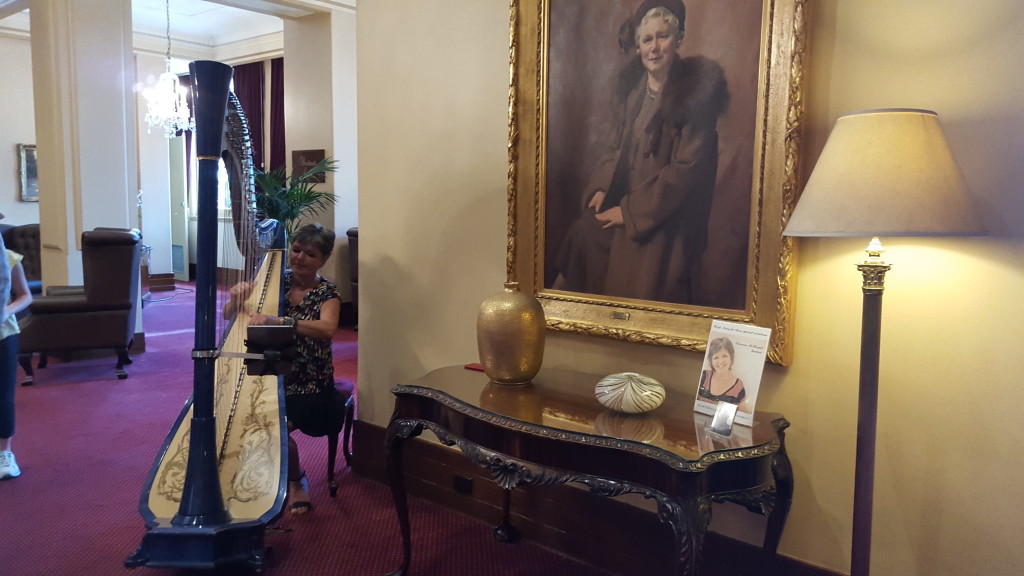 With Georgie Girl tickets secured, we ambled down to Southgate via the Laneways. I say ambled as I was pushing mum in a wheelchair borrowed from the Windsor. Hoping to save those hips and get us to the destination faster. 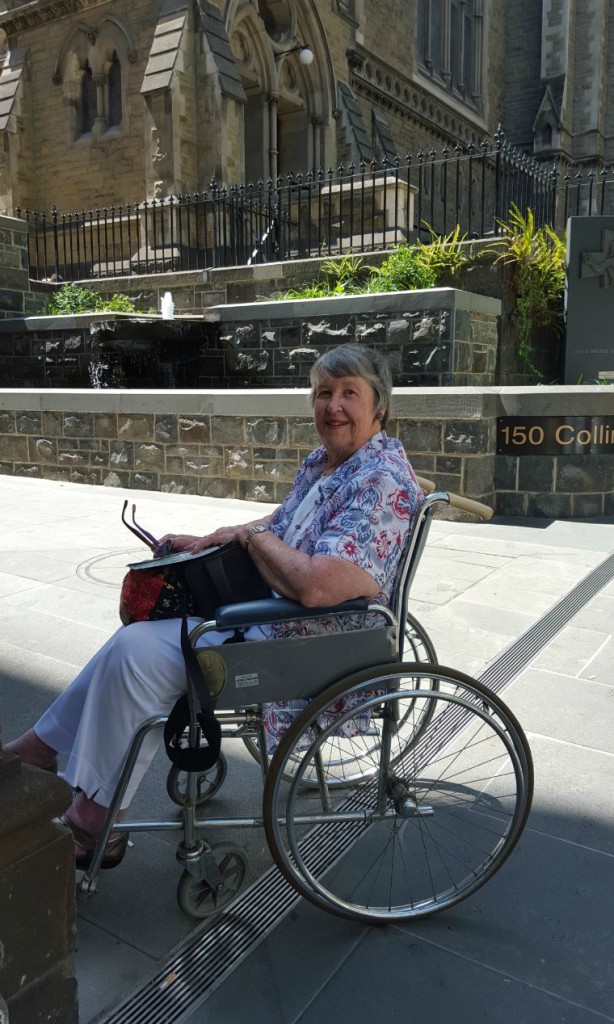 Not only was Melbourne kind to us for the weather – it was a warm and sunny 30 degrees, but the people were also warm as well. It was heartening to have strangers give me a welcome hand when it came to getting the wheelchair downstairs without ramps or up footpaths where small inclines made it difficult for me to push (blame a recent knee injury!) We enjoyed lunch in the narrow Laneways. After a quick check on the graffiti artwork in the Hozier Lane, we wandered over the Yarra and down to Southgate to watch some street performers and sit by the river. 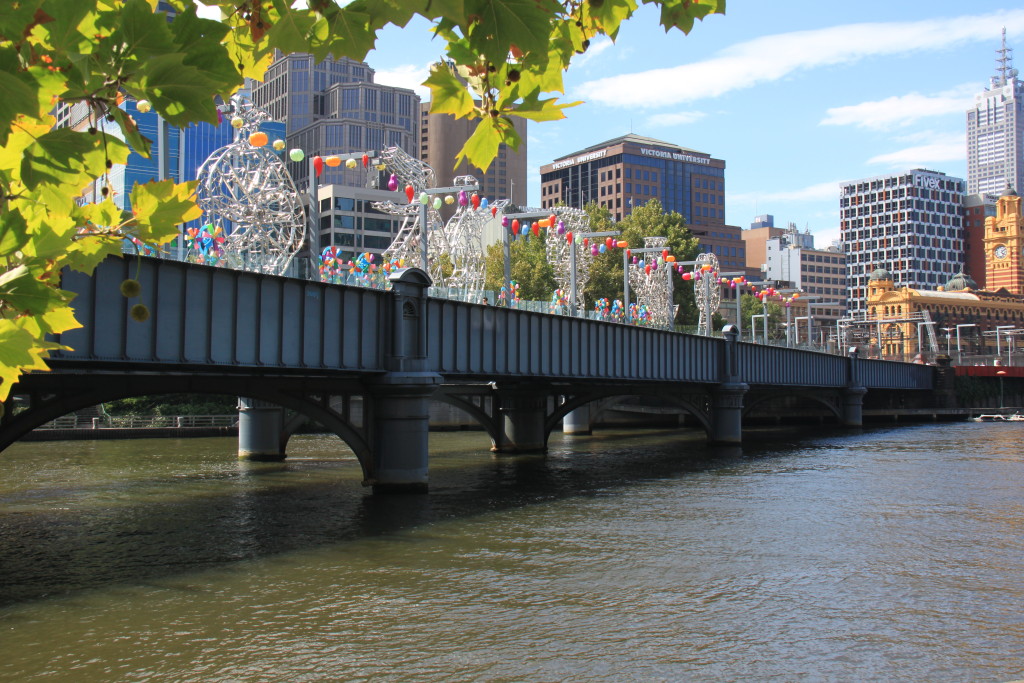 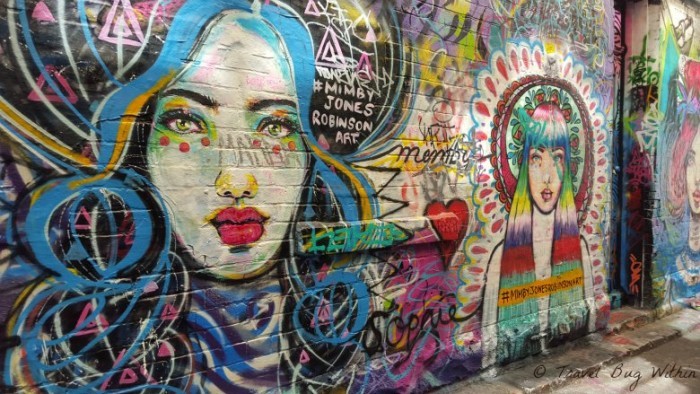 For our pre-show dinner, we ate at One Eleven – the Hotel Windsor’s restaurant. An exuberant French maitre’d seated us. On his return, he flamboyantly popped a bottle of French champagne expertly pouring two glasses. Was he sensing an element of romance in the air? It was the night before Valentine’s day after all.  After dinner, we wandered over to Her Majesty’s Theatre where we joined a large group of fellow Seeker fans. The musical is by one of the producers of Mama Mia. Sharp, witty with an insightful narrative, this story moved at the ideal pace. The harmonies by the actors who played Keith Potger, Bruce Woodley and Athol Guy were incredible. There will never be another Judith Durham, but Pippa Grandison (Underbelly and a Country Practise) provided many goose-bump moments.  The songs were all polished versions of the original.  You’ll be singing along with Georgy Girl and tearing up to The Carnival is Over. Anyone who grew up listening to the Seekers should see this musical.  It tours Sydney in April.

On Sunday we farewelled the Windsor Hotel. We had a Royal Tattoo to attend. I was expecting a crowd packed with Zimmer frames and wheelchairs and I wasn’t disappointed.  The day before at Melbourne airport, the QANTAS people mover driver apologised to me for the wait.  He said this weekend has been busier than Christmas. Was it because of the Tattoo I asked? Yes, absolutely he said, confirming my preconceived notion the Tattoo attracted a certain generation. Truthfully though, there was a cross-section of ages attending the matinee performance at Etihad Stadium, including a few children. The promoters had talked up the re-creation of a life-sized Edinburgh castle. And so they should – it was impressive. Kudos to the set designers who painstakingly painted each brick to replicate the aged look of the original. Who knew we would see Edinburgh Castle in Etihad stadium? 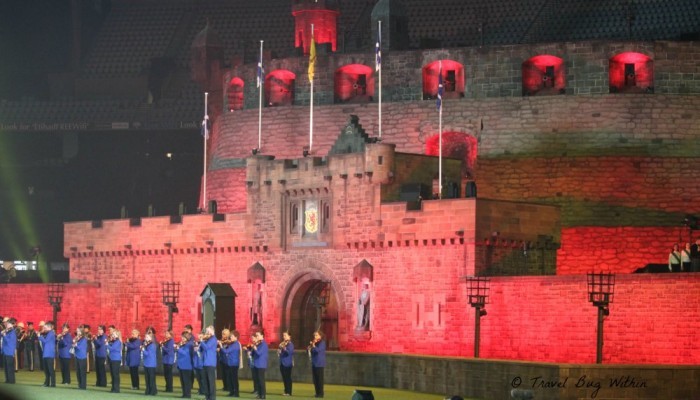 The Tattoo is all about precision and timing. I recall the pomp and ceremony when I saw it on TV – but seeing it LIVE is something else. The military bands and performers enter the arena, each performance bringing a unique flavour. Among the crowd favourites were the Top Secret Drum Corps from Basel, Switzerland. 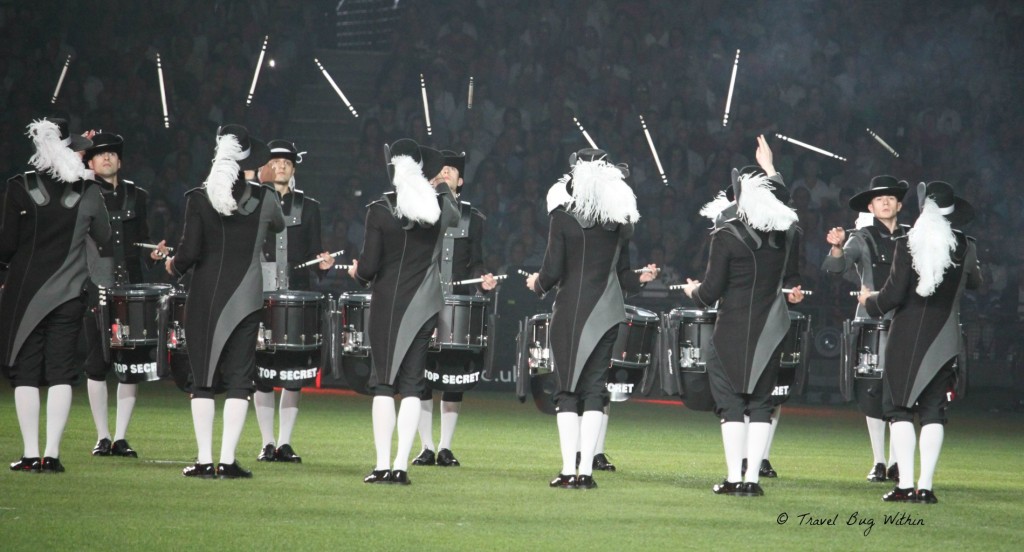 Sporting fancy white plumes and perfectly synchronised drumsticks, could their actions be any more spectacular? Oh yes, it could. With flaming drumsticks (fire sticks) beating and white fireworks shooting from their spinning Swiss flag tips in perfect synchronisation – the crowd was captivated – the oohs and ahs from the wowed audience were justified.  The grand finale, with all the military bands re-entering the stadium joined by the pipes and drums, was the perfect end to an incredibly stirring sight.

The look of enjoyment on my mum’s face was enough for me. I didn’t expect to be blown away by this show as much as I did. My Scottish ancestry no doubt helps to stir my blood when I hear bagpipes playing. But hearing AND seeing them en masse as they are in the Tattoo is something else. I now understand why the Military Tattoo shows are often sold out in advance. People from all over the world come to reminisce and enjoy the stirring performances by not only Scotland’s famous regiments – but regiments from around the world. 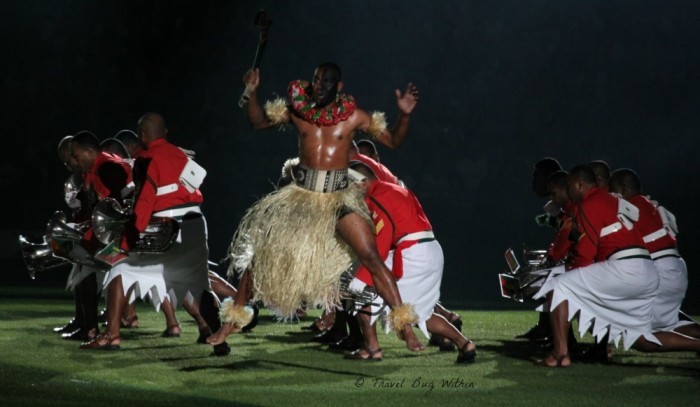 Waiting to catch the tram home outside the stadium, we talked to a few exuberant Tattoo fans. Among them was an 80yo gentleman who travelled from Scottsdale in North East Tasmania. For him, these Tattoos are particularly special, as he played in his first Tattoo in Dundee in 1954 as a young 19yo from the UK.  Happy to sit up high in tier three at Etihad stadium, he told me it’s all about the patterns – the precise timing of the marching. I asked how they managed to do that so well – play an instrument as well as march in perfect time. The practice he told me – hours and hours of it. Of course.

Without any hiccups, my mother and I made it through the weekend. We were prepared for the security people at the airport on our way home, giving them prior warning she would set off the alarms.  Both grateful for the special memories we made over the two days in Melbourne.  And we agreed, the highlight was experiencing our very first Royal Military Tattoo.  I’m going to look into trips to Scotland – I feel a yearning to return. 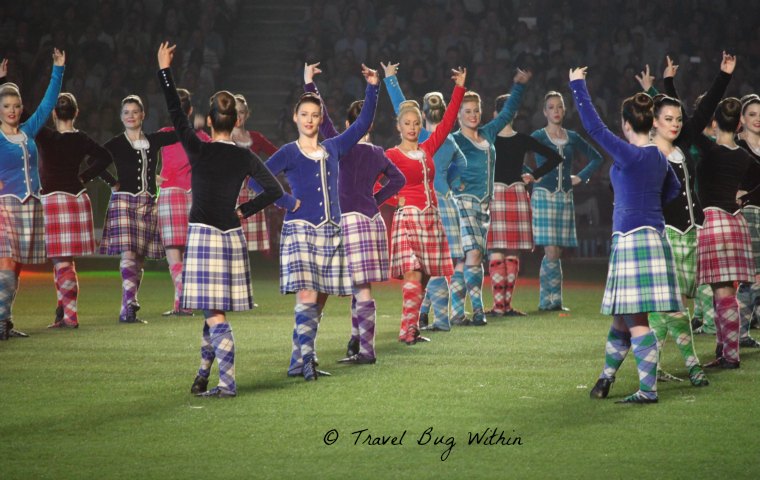