As a traveller I’ve made frequent trips to Hong Kong, but I never considered making a side visit to Macau at the same time. No idea why, but it took an aquatic Cirque du Soleil style show – the House of Dancing Water – to finally lure me there. A one day visit to Macau was planned to see the show and take a quick look around the old town. But I left intrigued by the place. It was a different experience compared to Hong Kong.

Macau is a fascinating mish mash of Asian and European culture, attributed to an interesting blend of Portuguese and Chinese heritage.  The Portuguese first settled in Macau in the 1550’s when the city acted as a trading hub for Europe, China and Japan.  It remained a Portuguese territory until December 1999, when sovereignty was transferred back to China.  Evidence of these two vastly different cultures are everywhere. I believe this co-existing harmony of cultures underlies the magical essence of Macau. 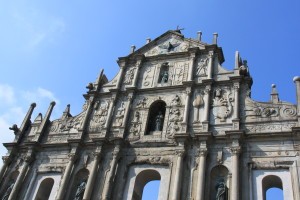 Macau is a special administrative region of the People’s Republic of China. About 60 km directly west of Hong Kong, this 28 square kilometre land mass includes the Macau Peninsula attached to mainland China and the small islands of Taipa and Coloane connected by a bridge and landfill forming Cotai.  The 652,000 inhabitants of Macau live in one of the world’s richest regions. Judging by the number of casinos in Macau it’s easier to figure what is the biggest contributor to the economy? Gambling. Followed by tourism. 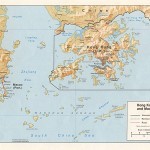 How do I get there?

A 50 minute fast ferry ride from Hong Kong is one option. New Zealand and Australian passport holders easily enter Macau, no tourist visa is necessary for stays of less than 30 days. Immigration is extremely efficient.

If you prefer to not stop in Hong Kong, you can fly to Hong Kong, catch the ferry to Macau, then collect your bags and clear customs in Macau. A great option for travellers wanting minimal transit stress.

What’s the best way to get around?

Taxis are inexpensive and plentiful. Free shuttle buses run from the many casinos. I caught a free shuttle from the City of Dreams casino back to the ferry terminal at the end of the show.  Very organised, easy to locate and use. 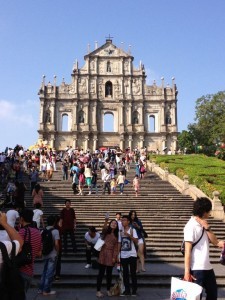 The Macau walking maps or app-guided walks are easy to use through the historical parts of Macau. Alternatively just follow the tourists. Tourists congregate at the steps leading to the Ruins of St Paul façade, the remains of the first church established by the Jesuits in China.

The original church, Mater Dei (mother of god) was built in 1602-1640. A fire in 1835 destroyed everything but the façade that remains standing on its own today. The façade is divided into five levels with an eclectic combination of sculptures.

For the best views of the city head to Mount Hill. Here you’ll find an impressive stone fortress perched on the hill overlooking St Paul’s. The fortress, built by the Jesuits in 1617-1626 was used to protect Macau during the Dutch invasion of 1622. Interestingly the last vestiges of protection the canons don’t face mainland China. 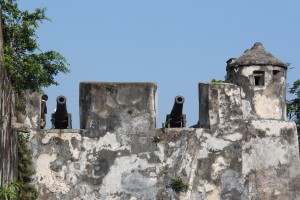 The fortress was demilitarised in 1976 and in 1998 the Macao Museum was installed and is the perfect place to wander through if you’re interested in learning more of Macau’s history. And if you enjoy museums, relish the fact there’s another 20 to visit in Macau.

To remind us of the Chinese heritage, a sacred Chinese folk Temple called Na Tcha stands next to St Paul’s. It was built in 1888 to honour the traditional deity – child god of war. Both structures are examples of Macau’s acceptance of differing religious beliefs. Their co-existence are interesting examples of the blending of European / Chinese culture. 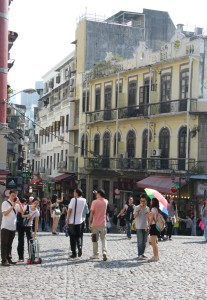 Wandering the uneven cobbled side-streets around St Paul’s takes you past a number of cafes and shops. Nothing the glaring Chinese signs emblazoned on the European styled buildings remind the vistitor we’re in the heart of Chinese territory. The pastel painted neo-classcial buildings at the base of the St Paul’s is Senado Square are irresistable to the picture snapping tourist. Other attractions in the area include the St Domincan’s Church, the St Augustine’s Church and St Lawrence’s Church. 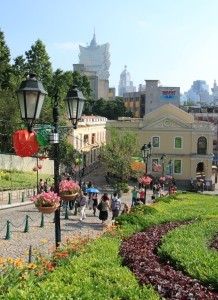 Thrill-seekers visiting Macau wanting to test their adrenaline, should visit the world’s highest bungee jump at the AJ Hackett Macau Tower. I was unable to fit that into my day visit to Macau, but this video shows someone jumping at the Macau Tower. It gives an idea what a leap off the ledge to a safety mat 233 metres below feels like!

Night bungee is available to up the ante on the adrenalin level. If  bungee jumping sounds too adventurous, try the skywalk around the external platform on the 338m tall tower secure in the knowledge you are harnessed in for safety. For those seeking an even more sedate experience there’s always the gondola ride at the Venetian Hotel.

The Shrekfest is ideal for younger kids, where they’ll enjoy a buffet breakfast with a few characters from the cast of Dreamworks at the Sheraton Macau Hotel Cotai Central. Served twice daily, families dine with favourite characters from Madagascar, King Fu Panda and How to train your Dragon. Families can skip breakfast and watch their favourite Dreamworks characters parade through the Mall at the Sands Cotai Central, with plenty of opportunities to get up close and personal to the characters. 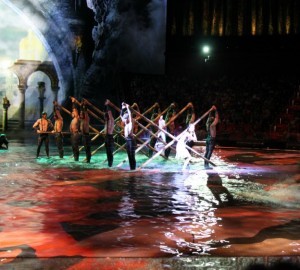 Set in an aquatic theatre, world class circus performers, acrobats and dancers perform against an interchanging backdrop. Ships and buildings sink into the watery depths, a feat of engineering as they disappear into an olympic sized pool of water.  The mind boggles as to where all that water goes as do where do all the performers as they dive into the choppy water. 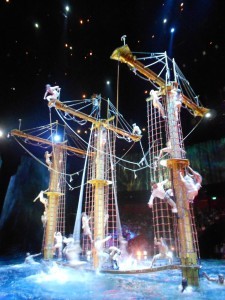 The solid stage re-appears as if by magic and motorbikes perform dare-devil stunts jumping over ramps. I’ve no idea what the motor cross performers have to do with the story – which is in fact a love story – but they add a different dimension to intermission. There’s so much entertainment, its easy to forget the story-line! 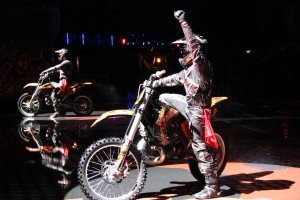 not sure why they’re in the show – but they are!

If you want to be up close and personal to the action when booking, request the “wet” seats – but be warned – you will be drenched with water. The audience around us must have received the warning (which we missed) about bringing plastic ponchos for protection from the splashing! 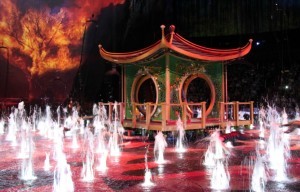 With limited time, we tried the tasting room at the City of Dreams with a selection of Asian inspired French fusion food.  Macau has many authentic Macau food experiences (the Portuguese tart is recommended) I wished we had more time to indulge, but I figure that creates the perfect excuse to return.

Author Ian Fleming, stayed in Macau’s historic old town area during WWII.  He drew inspiration from the city as he wrote a few of his James Bond novels. The inspiration behind my first visit to Macau was more theatrical: the House of Dancing Water. Not only was the show an out of this world experience, Macau was also an unexpected delight.

Make Macau a destination and remember, there’s so much more to Macau than the bright lights and flashy Vegas style casinos. 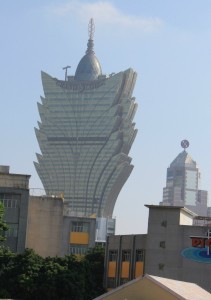