Home » Destinations » Australia » Five things to do in and near Darwin

When is the best time of the year to visit the Northern Territory?

Before it gets too hot

Darwin is the gateway to some of Australia’s most memorable wilderness and adventure experiences – waterfalls, ancient rock art, wildlife (not just crocs,) culture, and there are plenty of unique places to eat out.

Just make sure you leave time to explore the Territory’s cosmopolitan capital city.

During the Northern Territory’s (NT) wet season (November to April) the weather is hot and humid. Visitors to Darwin at this time can expect monsoonal rain most afternoons, including some spectacular storms rolling in over the water.

I’m from Brisbane and during summer, our humidity is enough to send me indoors to be comfortable in air-conditioning or beneath a ceiling fan. Not being a fan of sweat-soaking humidity, I prefer to visit Darwin during the dry season (May- October) where temperatures range from 27 – 32 degrees Celsius (still plenty high but dry over humid) to enjoy the many outdoor attractions including a number of world heritage listed natural icons.

My second visit to Darwin was on the cusp of the dry season (early-May) and I’ve suggested my top 5 things to do in Darwin and beyond.

And if it’s your first time to Darwin, I’ve written about my Top 10 Darwin experiences as a first-time visitor.

The Tiwi Islands are a chain of nine islands 80 Kilometres (50 miles) north of Darwin. The two larger islands, Bathurst and Melville have been inhabited for at least 7,000 years and the Tiwis are the first Indigenous peoples to have made contact with the Dutch explorers, in the early 18th Century.

It is easiest to visit the Tiwi Islands by tour – access to explore on your own is by invitation only. I visited the smaller of the Islands, Bathurst, with a population of 2,000 in May 2019 on a one-day AAT Kings Tour. In conjunction with a local Tiwi tour guide, our group met and talked with Tiwi residents and took part in a welcoming smoking ceremony.

Jacinta, a softly spoken Tiwi elder, and two other Tiwi women demonstrated their painting skills. Jacinta spoke about the special role women play in passing on their culture through stories shared during foraging walks with the younger generations. I recognised her from the ‘wedding scene’ in the movie, Top End Wedding, a rom-com starring Miranda Tapsell (Sapphires) and Gwylim Lee (Bohemian Rhapsody) mostly filmed in the NT,

It was a few days before the island’s official viewing of the movie.  Before heading to Darwin I’d managed a sneak preview before its Australian release on May 2nd.  The Tiwi love song played at the end of the movie had me reaching for the tissues. The wedding scene is filmed at a small Catholic church on Bathurst Island. The Catholic mission was established on the island in 1911. We visited the church building (no longer used as a church, but still used as a gathering place) on the tour. No one on our tour group had seen the movie, so they weren’t as excited as I was to be walking into the location for a major (special) scene from the movie. 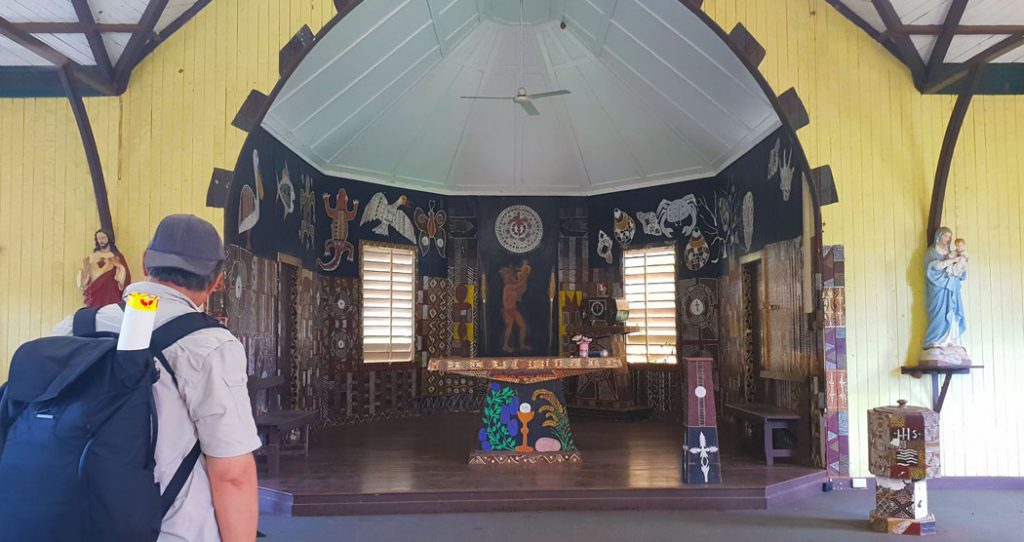 The altar of the Catholic Church on Bathurst Island in the Tiwis. You will recognise it if you have seen the movie Top End Wedding

A song is sung by the Tiwi Island’s Wanigatunga women’s choir and Jacinta is featured. (Locals are included as extras in the movie.)

I told Jacinta she was a star and asked if I could have my picture taken with her. She shyly obliged not sure what the fuss was about. (She hadn’t seen the movie yet.) 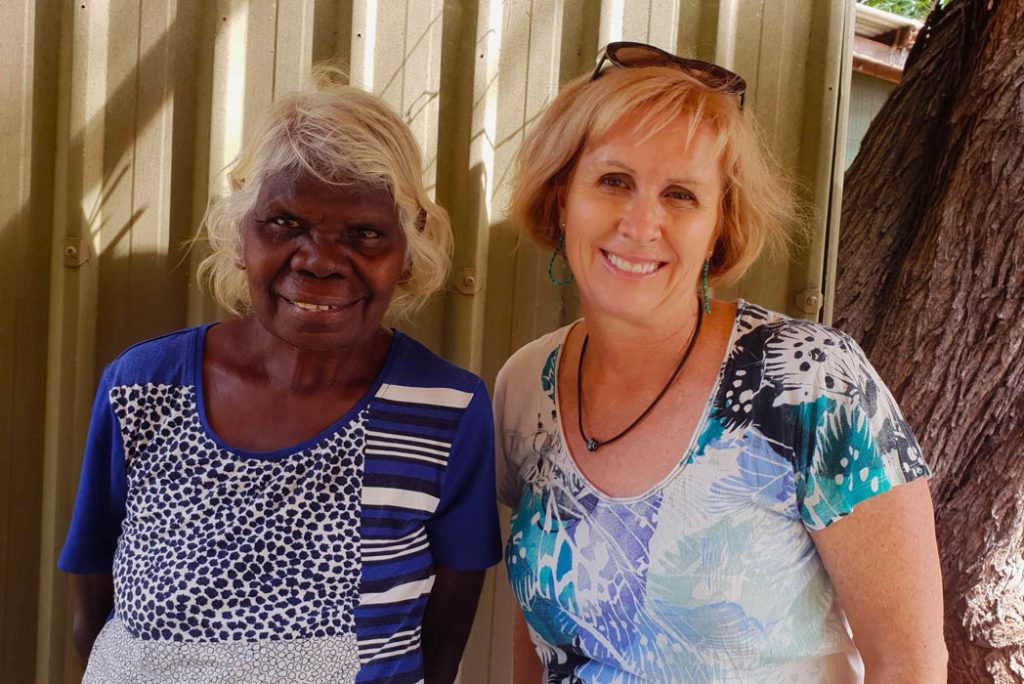 The island has a blossoming local art scene that plays an important role in the culture and economy of the Tiwi Islands. At one of the local art studios, Tiwi Design I watched the steady brushstrokes of local artist Alan. I asked him about his inspiration for his work.

A shy man, he spoke about the meaning behind the artwork he’s created for 30 years. Each of his paintings embodies a story with cultural significance in his community. 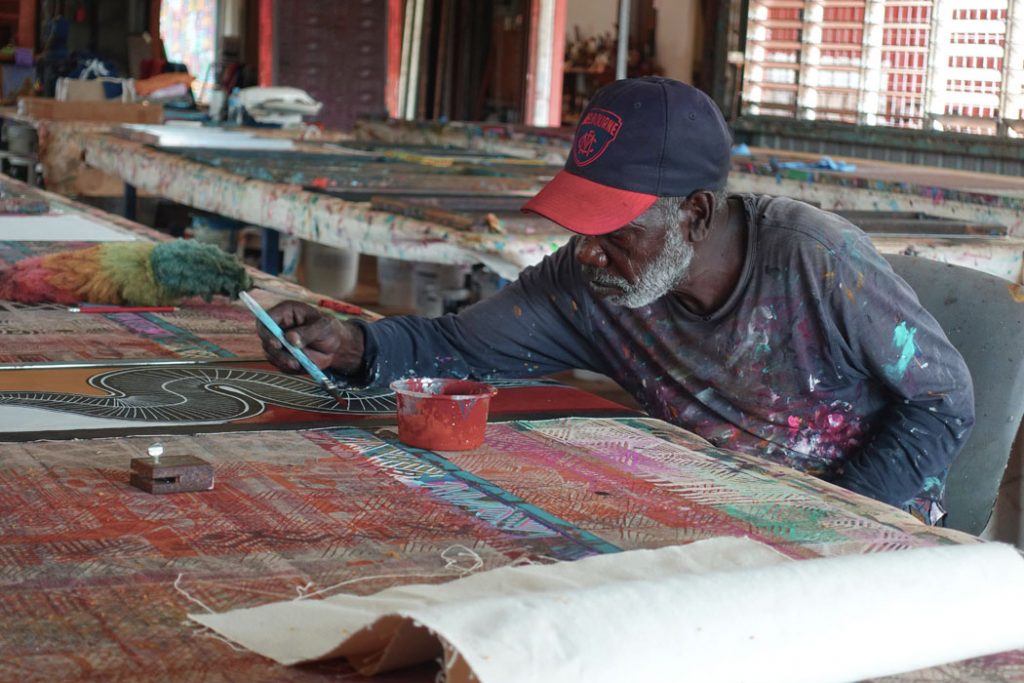 For more on the people of Bathurst Island read my story

Kakadu National Park is a three-hour drive from Darwin. This year I was lucky enough to visit Kakadu twice within the space of a week. I visited Kakadu for a day and a half on my AAT Kings Tour and then I returned with some friends for the Taste of Kakadu Festival during the Park’s 40th Anniversary.

In its third year, the 10-day festival which celebrates Kakadu’s indigenous cuisine, culture and country was running from May 10th to 19th. Visitors choose from an assortment of interactive food experiences, designed to give an insight into how Australia’s oldest living culture – estimated to be 65,000 years – have for tens of thousands of years prepared native foods, including crocodile, buffalo and barramundi –  flavoured with local fruit and bush herbs.

To appreciate the spiritual connection I recommend connecting with an Indigenous-owned and operated tour. On Yellow Waters at Cooinda, regular tours are conducted by indigenous guides. During the Taste of Kakadu, we enjoyed an unforgettable sunset cruise with canapes and drinks.

Was it going to be the same/same doing the same tour?

No. Absolutely not! The different time of day made a difference (and I have to say the sunset tour was actually marginally better for wildlife viewing.)

Being a sunset cruise (4.30 pm – 6 pm) the light during golden hour was stunning. The animal’s behaviour was also different from the morning tour. I’ll never forget this large saltwater croc lying on the embankment, jaw open – completely still. So still, he looked like a fake replica. Maybe planted there for the tourist?

No! Our guide informed any who doubted this croc wasn’t real that this is how they cool their body after a warm day.

There are over 5,000 rock art sites within the park and many of them are within easy access of the walking trails. A 1.5-kilometre circular walk at Nourlangie (Burrungkuy) incorporates ancient rock art sites including the Anbangbang rock art gallery. 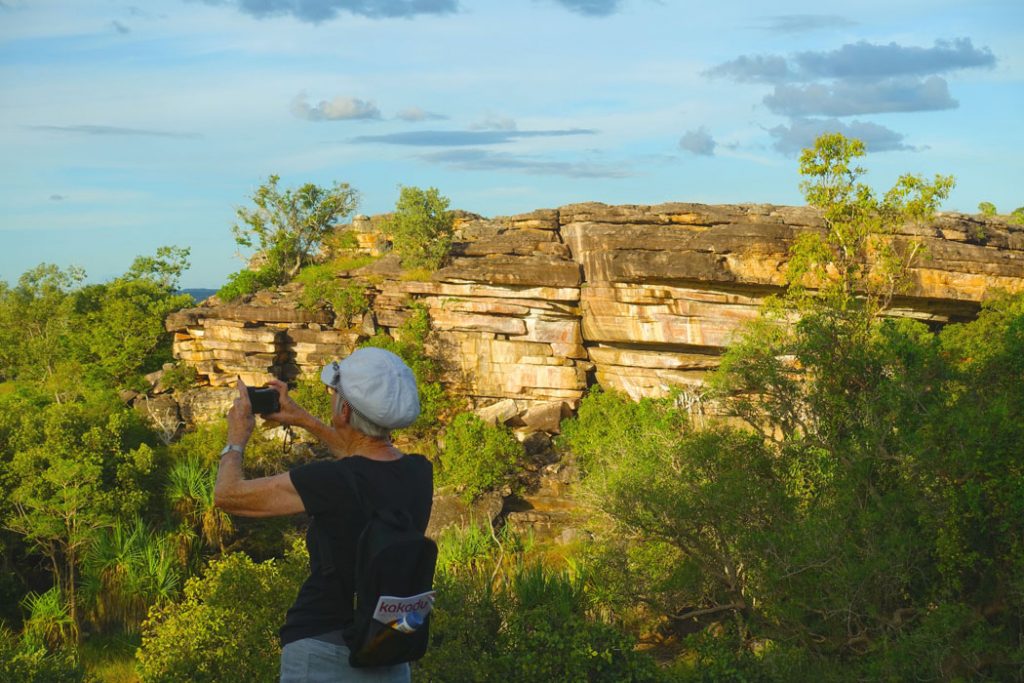 Kakadu National Park with Daberrg rock formation in the background

This well-preserved gallery depicts the Creation Ancestors and Namarrgon the lightning man with saratoga fish (Guluibirn) from the billabong. 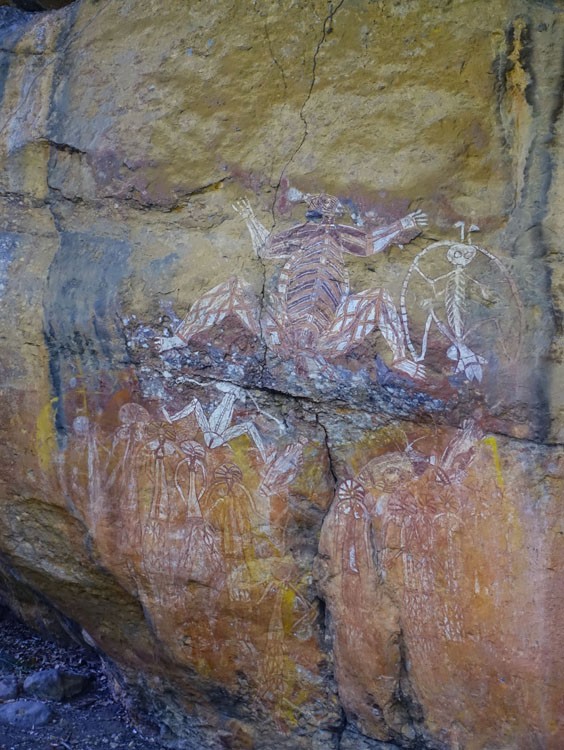 In the shadow of the Arnhem Land escarpment has a one-kilometre circular track with many preserved rock art sites. One ancient rock drawing of a Thylacines – a Tasmanian Tiger dates back 4,000 years before the animal’s extinction. A moderately steep, but well-signed climb brings you to the top of a rocky outcrop with stunning views over the Nadab floodplain. They say the sunset is spectacular from the top of Ubirr. 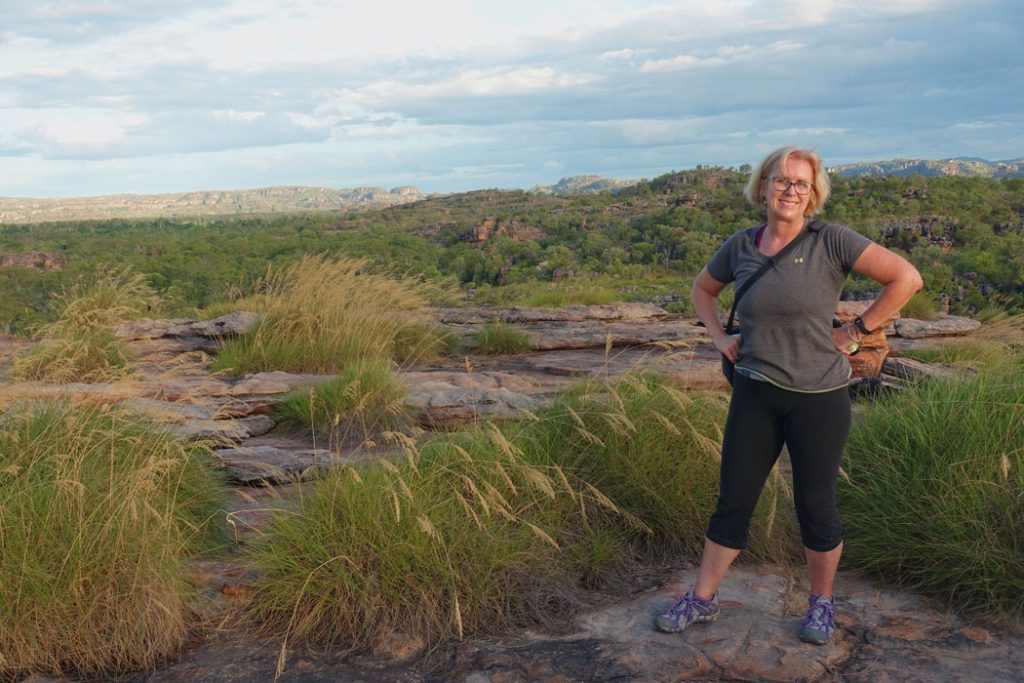 At the southern tip of Kakadu National Park, Nitmiluk (pronounced Nit-me-look) a Jawoyn word meaning cicada place, is 278  kilometres southeast of Darwin and 30 kilometres northeast from the town of Katherine. By road, Nitmiluk is a 4-hour drive south from Darwin on the Stuart Highway.

The drawcard of the park is the Nitmiluk Gorge, a series of 13 steep-walled sandstone water-filled chasms, some with depths up to 100 metres. During the wet season (November – April) the waterways flood and flow for 12 kilometres before opening out further upstream. During the dry season (May – October) when the water level drops, sometimes by two metres, the gorges become separate entities, divided by exposed rocks. You can explore the park and gorge country on foot, by canoe, boat or helicopter.

I didn’t get the chance to experience this, but the Nabilil Dinner Cruise sounds like a relaxing way to dine on freshly prepared Australian cuisine and experience the Gorge by candlelight whilst your onboard chef prepares a delicious meal of .

Accommodation is available within the National Park. You can choose from camping, to chalets through to the upmarket Cicada Lodge.

Located in Darwin’s CBD on Mitchell Street – you couldn’t imagine any other capital city in Australia housing this many crocs in their centre!

Initially, I wasn’t going to bother visiting, as it all seemed very touristy and I was concerned about the crocs being caged.

Is it cruel to the animals?

I learned many of the crocs found at the Cove have been ‘removed’ from various locations. They represent the troublesome crocs that would have been exterminated had it not been for Crocosauraus Cove who agreed to take them in. As mentioned above my local friend highly recommended the experience, so before my afternoon flight home, I found myself at the front entrance right on opening time ready for my 9.30 am “Cage of Death’ experience.

This post is not a place to debate whether you should or shouldn’t go. I did and I enjoyed the experience.  After observing crocs in their natural habitat and performing on the Adelaide River, I was blown away by how close you can get to these wild animals at Crocosaurus Cove, as well as how much additional information I gained.

If you’re after a comprehensive tour that covers the War history Darwin and the NT experienced this is the tour.

Locally owned and operated this half-day tour is fully guided with visits to many historical locations and museums.  A small bus picks up from local hotels (for an additional $5 they will collect from outer caravan pickups.)