and you don’t have to be dying to get there!

I was about to make my first trip to Darwin when the Australian Road Trip Movie Last Cab to Darwin began screening in Australian cinemas.   The movie is about Rex (Michael Caton) a taxi driver from Broken Hill. Shortly after discovering he has terminal cancer, Rex hears a nurse from Darwin talking on the radio about legalising euthanasia. The right to die on ones’ own terms sparks Rex’s road trip to Darwin. I watched the movie with the idea it may help me understand Darwin!

But this post is not a movie review, it’s about my first trip to Darwin. Brought about by the death of my dear old Uncle Barry. He wasn’t heading to Darwin like Rex to choose death on his own terms. Barry was already dead. With a few family members, we were returning Barry’s ashes to Darwin. Uncle Barry lived in Darwin for some 20+ years, but with the onset of dementia, he had to leave his beloved Darwin for an aged care facility on the Sunshine Coast.

None of us were sure what Barry’s wishes were as he made none but collectively we agreed being a mad-keen fisherman it would be appropriate to scatter his ashes in the south gutter, a couple of hours from Darwin Harbour. So my Uncle Barry is the reason I’m flying into Darwin for the first time.

It was early September, the dry season. I only had four days, but here are my Top 10 Darwin discoveries as a first-time visitor.

This is based not only on its geographical location but also on history and a couple of significant natural events. On the 19th February 1942, during World War II, the city was bombed by the same Japanese force which struck Pearl Harbour. Darwin suffered a great deal of destruction from the bombings, which was kept quiet at the time, to not cause panic in the remainder of Australia!

Then early on Christmas day 1974, Cyclone Tracy unleashed its fury, decimating around 70% of the city. Much of Darwin was rebuilt after Cyclone Tracy, giving the cosmopolitan city a “youthful” look.

The unique architecture of Burnett House

Thankfully some of the city’s unique architecture survived cyclone Tracy’s fury. Burnett House is one of them.  Designed in 1939 by architect Beni Burnett, the house was built before the advent of air-conditioning. It is two stories, with living and dining downstairs and sleeping areas upstairs. Downstairs is made from reinforced concrete columns and beams to keep cool and potentially withstand strong weather. The upstairs walls are timber-framed with fibro sheet cladding and cement louvers to be opened for airflow – an attempt to combat the humid Darwin weather. Burnett House is an example of an ingenious design that withstood the double-edged brunt of WWII bombings and a cyclone (the house only lost its roof in Cyclone Tracy.) A testament to a style of architecture that is meant to last. 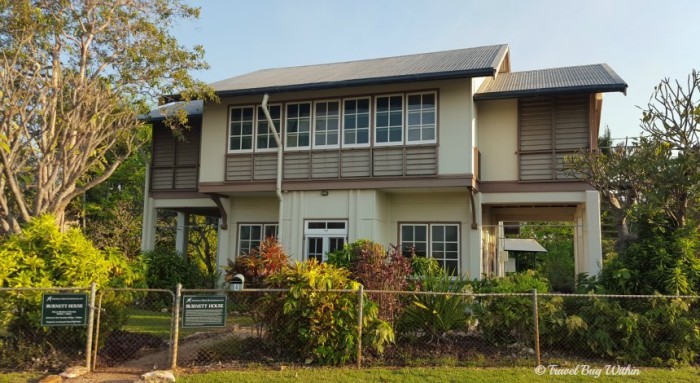 The Northern Territory’s Parliament House is another example of interesting architecture. Described as a contemporary tropical style, the building which opened in 1994, was built on the site where the original post office and telegraph station were bombed during WWII in the first air raids (a surprise attack on 19th February 1942.) Located in State Square at the end of Mitchell Street, you can easily walk to Parliament House from the Esplanade.

A free guided tour departs from the foyer of Parliament House at 9 am and 11 am every Saturday from February to November. During the dry season (May to September) an additional tour is offered on Wednesdays at 10.30 am. (Bookings not required.)

Sitting outside on a mild Darwin night watching a movie, the sound of water gently washing in and out of the harbour shoreline in the background and the breeze gently blowing through the vegetation was special. I loved the deckchair cinema experience and recommend it as a perfect place to spend a balmy evening. Located at the base of the cliffs the cinema is easily accessible on foot by a set of concrete stairs via the Damoe-Ra Pathway. 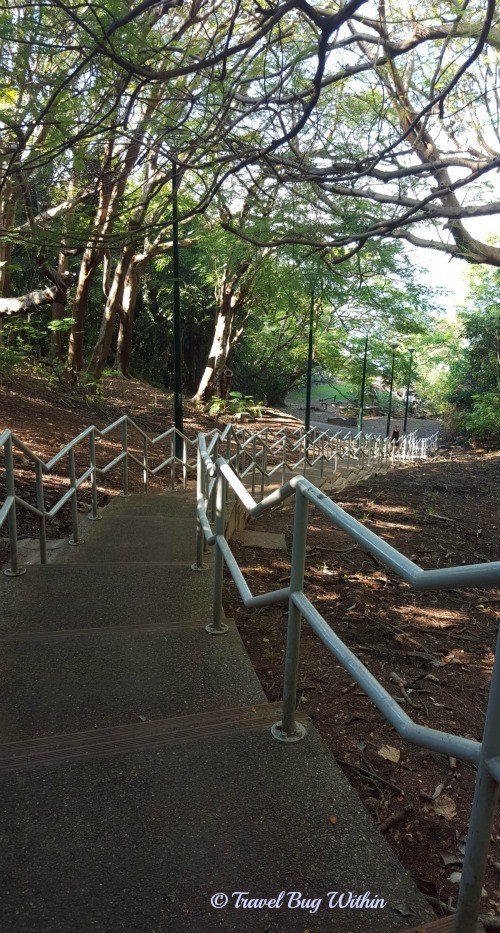 Stairs down to the Deckchair cinema

If you happen to be staying in the city as we were, it’s a pleasant stroll to the cinema, but if driving or catching a cab or wheelchair access is required, try the car park on the lower level near the cinema’s front entrance.

I’d read online about the resident possums who often scamper across the ground at night time. We saw no possums, but this could be the result of our high octane movie – Mad Max Fury Road.  The non-stop adrenaline-packed action (at high volume) probably kept the little critters away! 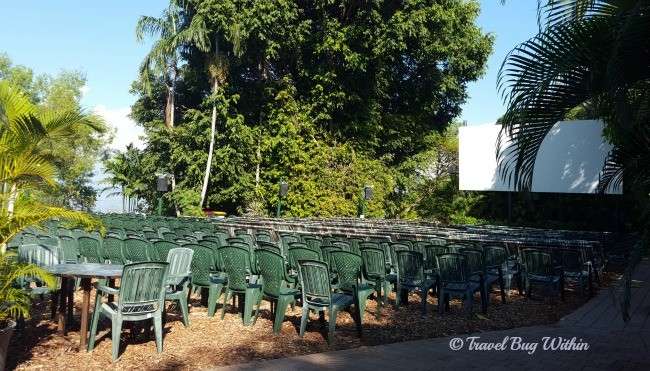 Tip for visitors: either BYO pillow or cushion as the metal bars on the deckchairs get a little uncomfortable. The cinema provides cushions but our faux pas – due to the lateness of our arrival and lights dimmed, we walked straight past the pile of cushions for patrons. This is an experience I recommend and remember, it’s best to book ahead and check the movie selection – they differ each night.

Who hasn’t seen a sunset photo from Mindil Beach on social media?

Visitors to Darwin AND the locals talk about these markets.

Featured on many Instagram pages (mine included) it is fun to be with the sunset worshippers, their smartphones and cameras ready to catch the golden orb as it descends (rapidly) into the ocean.  It’s a spectacular sight to see the sun dip into water (and not something I see often living on Australia’s east coast)

The pastel hues that follow provide the perfect canvas to explore the market stalls. 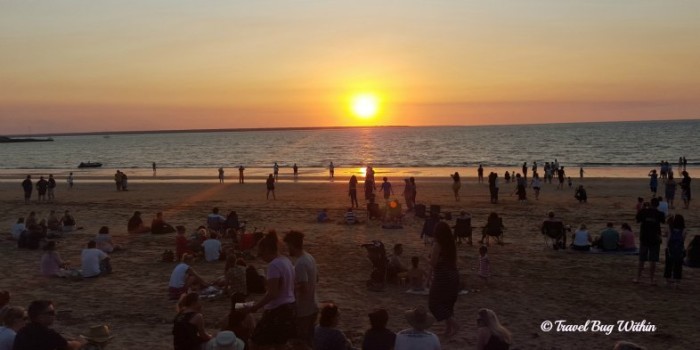 You’ll find a variety of stalls showcasing local arts, including beautiful indigenous artwork, craft, and the unusual but very Territorian crocodile skulls! Delicious fragrances linger in the night air from an assortment of food stalls.  So many delicious choices including Thai, Singaporean, Indian, Greek, Sri Lankan, Turkish, South American with one stall even selling snacks from Borneo.

And for mango lovers – the Northern Territory is the country’s largest producers of the sweet fruit – find the stall selling mango smoothies. They’re the perfect refreshment after consuming hot chili flavoured snacks!

On a much smaller scale than the Mindil Beach Sunset Markets, the Parap Village markets have a number of delicious food stalls and a selection of fresh produce to fill your shopping bag. There are art, craft and fashion stalls selling original market crafts. We stopped for an Asian style breakfast followed by a little shopping. Stallholders are very friendly, relaxed – typically Darwin. 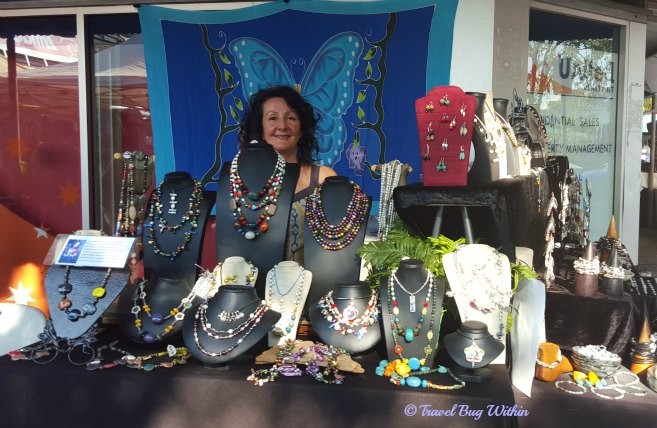 Laureen Ward and her stall at Parap Village Markets

Parap Shopping Village Saturdays open from 8 am- 2:00 pm all year round

Named after Frederick Henry Litchfield, a member of the first European expedition to the area, the park boasts bushwalking trails in terrain that is ruggedly breathtaking.

Your options are to drive, take a flight or take a day tour as we did.  We chose a tour with AAT Kings for an overview of the park and extra snippets of information about the park from Rob our Tour Guide.

A menacing-looking croc named Sweetheart greets visitors to the museum.  After years of terrorising fisherman in their dinghies in Sweets Lagoon, this giant saltwater croc measuring 5.1 metres was caught in an attempt to relocate him. Unfortunately, he drowned during the failed rescue mission.  (This was back in July 1979, pre-Steve Irwin.) Sweetheart is a not so subtle reminder crocs of this size are out there (somewhere) in the Northern Territory.

The Cyclone Tracy display in the museum educates visitors about one of Darwin’s darkest days (Christmas Day 1974.) You can hear a re-creation of the sound of the cyclone as it ripped through the town tearing buildings and landmarks away from their foundations. A reminder how terrifying it must have been to be on the ground as the cyclone tore through Darwin.

The Museum Gallery cafe overlooking Fannie Bay is a perfect place to stop for lunch or morning/afternoon tea. (may not be open during Covid please check their website.)

Tip: the café is licensed – grab a cold wine or beer after (or before) viewing the exhibits – helps to manage the Darwin heat. 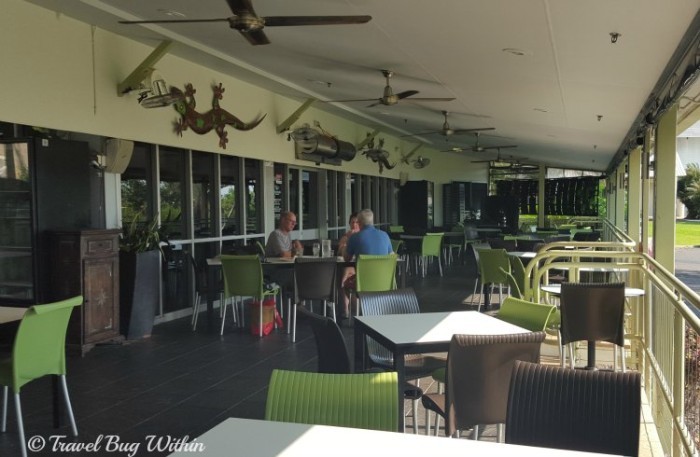 Entry is free and often the Art Gallery hosts exhibits. During our visit, we saw the Archibald Prize-winning artist Ben Quilty’s Afghanistan exhibit

Darwin is surrounded by water but sadly, most of it is not safe for swimming. The waterways harbour a few nasties: crocs and stingers.  You’ll find a safe swimming area at the waterfront precinct, near the convention centre, where you can swim safely at the bathing beach. The kids will love the man-made waves at the wave pool.  Just remember sunscreen and sun-safe clothing!

The recreation lagoon is ideal for kayaking, stand up paddleboards and canoeing.  And this is another place for watching sunsets.

Darwin is a cosmopolitan city with a large Chinese population. The small museum inside the Temple has information about the history of the Chinese who lived in the Territory, including how they were contracted to help build the railways out near Batchelor – the gateway to Litchfield Park- and the role the Chinese played in WWII.

Chinese custom  says a temple cannot be rebuilt unless it has been destroyed by an “Act of God.” After the Chinese evacuated Darwin in WWII when they returned they found their temple (originally built in 1887) damaged and looted. They had to restore the building rather than rebuild it, as this was not deemed an “Act of God.” It was re-opened in 1959.

Cyclone Tracy in 1974 wreaked its vengeance on the temple and destroyed it completely. This time it was deemed “an act of God” and the Chinese were allowed to rebuild. A new temple opened on the current site in 1978.

Dine out in Darwin with waterfront views.

The Trailer Boat Club, a favourite of my Uncle Barry’s is family-friendly and reasonably priced serving bistro-style food.

And another place to watch the sunset.  Just heed the signs. 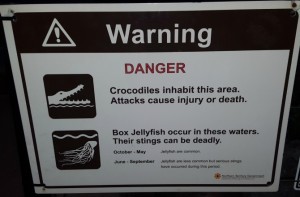 The warning signs crocs are in the waterways around Darwin.

Darwin has a wide selection of dining choices.  We tried Hanuman and enjoyed a selection of Thai and Indian dishes. Balmy evenings and outdoor dining beneath aged frangipani and Poinciana trees interlaced with fairy lights and lanterns give diners a special experience at Char Restaurant – on the Esplanade.

I’m not sure why I’ve waited this long to see Darwin.

It’s a little sad that my Uncle’s death prompted me to make my first journey. But I have Uncle Barry to thank because now I know why he loved Darwin so much.  And on my next visit to Darwin, I discovered a few new experiences

The capital of the Northern Territory has much to offer.  Life is laid back, the pace is slow and in sync with the casual dress code. It’s a city that on the surface may attract a transient population, but if you dig deeper, you’ll find people who’ve fallen in love with its undeniable charm.

And because of Uncle Barry’s love of fishing, I’ve caught my first deep-sea fish.

Jen catches her first deep-sea fish – which just happens to match the necklace!

Remember, you don’t need an excuse like Rex, who was dying to get there.