The Hotel Concierge is enthusiastically circling the places on my tourist map. He suggests I utilise Bangkok’s public transport system and take the ‘Express’ boat (orange flag) to the Grand Palace and Wat Phra Keow. Ten minutes earlier I’d tossed my bags into my room at the Anantara Riverside Resort, changed into comfy walking shoes, grabbed my hat and a cold bottle of water before heading downstairs. 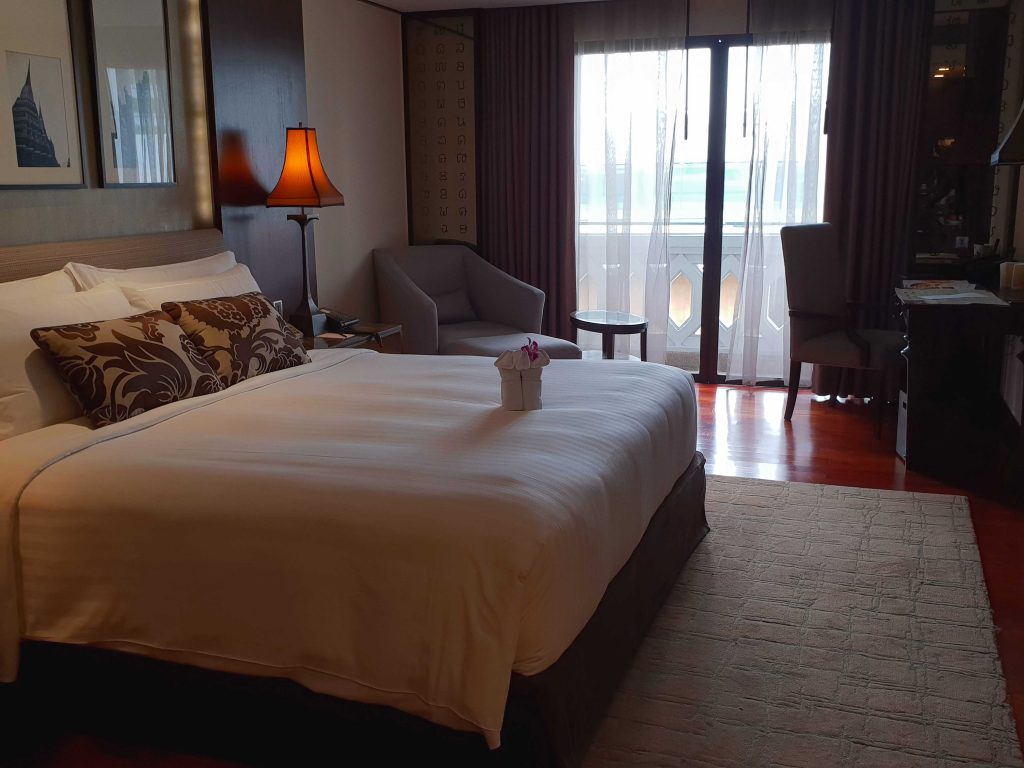 Concierge outlines a few ideas of what to do for a few hours. He adds it will be easy to reach the transport hub Saphin Taksin by taking the Anantara shuttle boat. And he was right! Getting to the Saphin Taksin was a piece of cake. The friendly Anantara shuttle service crew welcoming this first-time visitor to Bangkok. 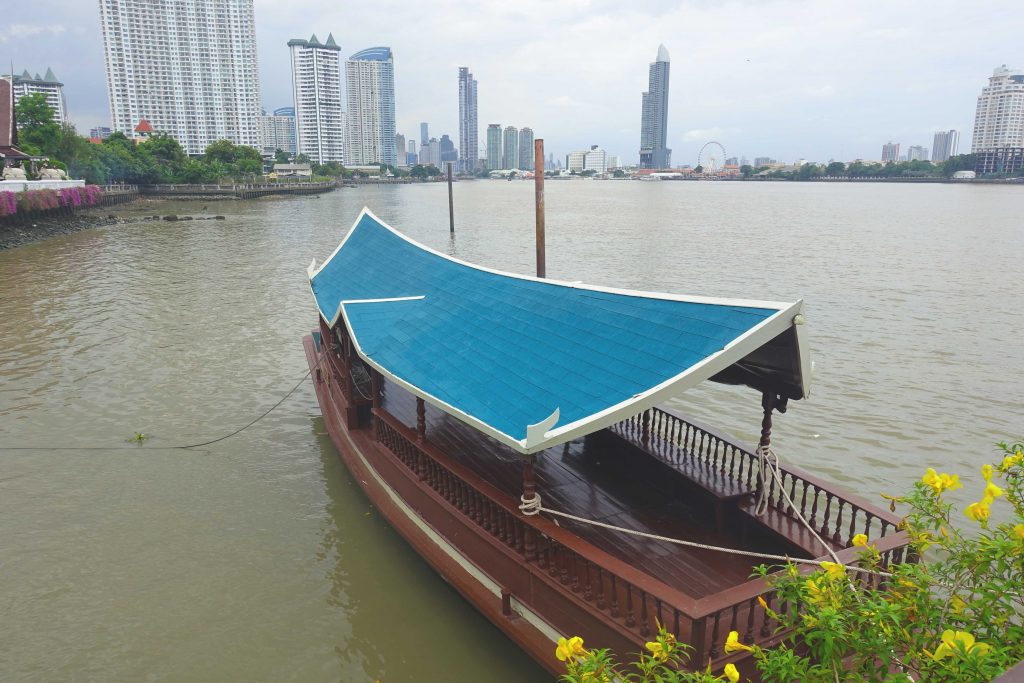 The confidence unraveled at the Saphin Taksin depot. Unfamiliar with the Thai public transport system at the busy terminal, I wasn’t sure which was the Express boat (the orange flag is tiny and hard to locate.) The ticket person who took my fare money (15 Baht) smiled understanding my confusion.  Gesturing to me to follow her, she expertly weaves her tiny frame around the throngs of humanity congregating inside the bustling station. She stops near a queue of people. Smiling and nodding, she points towards the wooden boat that is about to dock, indicating this is the boat to catch to the Grand Palace and this is where I should stand.

As the ferry nudges the dock, a flurry of movement secures the boat. A rope is cast to a fellow standing on the dock. Another crew member grabs a long wooden plank tossing it onto the floating jetty next to where our queue awaits. Passengers push to the front of the timber vessel ready to disembark on this narrow (ish) plank. It looks about one foot wide from where I’m standing. Our line of people politely moves aside to let them pass. I’m impressed by the sense of order among locals and tourists. There is no pushing to be first on (or off) the boat.

The narrow board shifts with the movement of the water. When it’s my turn to walk down the plank, I cautiously step along its thin width, thinking about pirate movies where unsavoury characters were forced to walk the gangplank to the swirling ocean below.  My feet stay close to the middle as I’ve no desire to take a dip in the brown murky waters of the great Chao Phraya River. As Thailand’s most important waterway, the river not only is a major method of transport for goods and people, it acts as a drain for much of the country’s fertile rice-growing land. I’ve also noticed, it carries a great deal of flotsam. I focus on clambering down the plank. 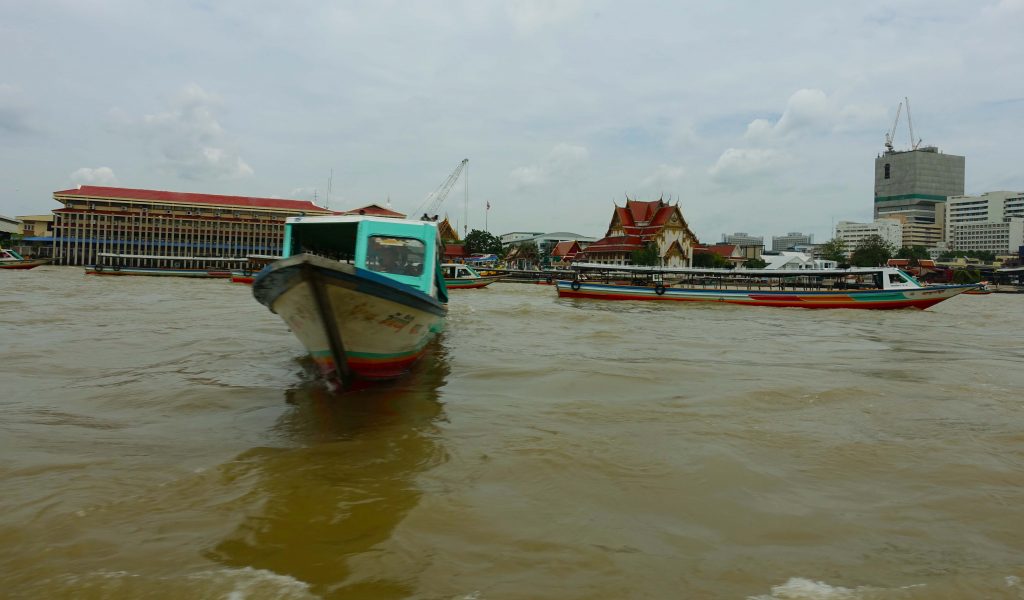 For the next thirty minutes, I observe a fraction of Bangkok’s eight-plus million residents walk on and off this transport vessel. A sea of bright orange catches my eye. A group of young teenage monks sitting together in the centre of their boat, their orange tunics are a vivid splash of colour against the murky brown river. I’d read somewhere when traveling on public transport, you’re not meant to sit near or next to a monk. No issues on this boat as all seats were taken – it was standing room only. Although a conversation with a monk is allowed and some are eager to practice their English, this group are quiet, their solemn faces giving little away. 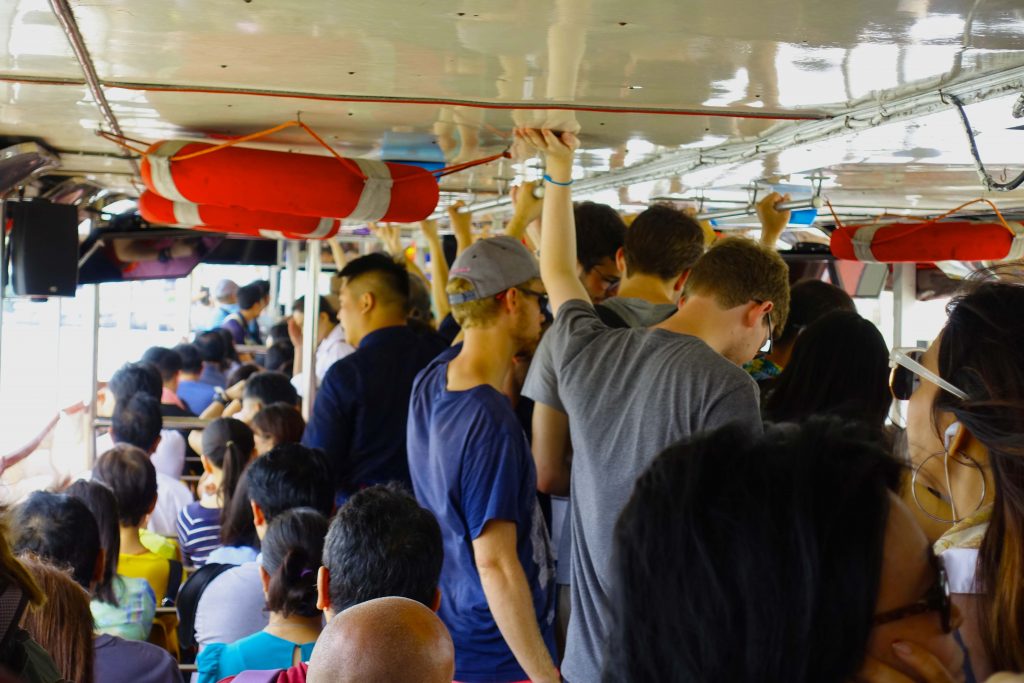 Standing room only on the Chao Phraya River Express boat

Swaying back and forth as the boat skims over the water, I was trying to ignore the humidity, the sweat dripping down my back, the proximity of my fellow passengers, and the number of people packed on this vessel. There was also the seeming lack of safety gear (one or two circular lifebuoys attached to the canopy was all I could see.) To distract my concerns about potential workplace health and safety issues on the water, (I can’t help myself, my earlier career in Human Resources means I’m always observing WPH&S ‘stuff’) I focus instead on observing what was going on around me. 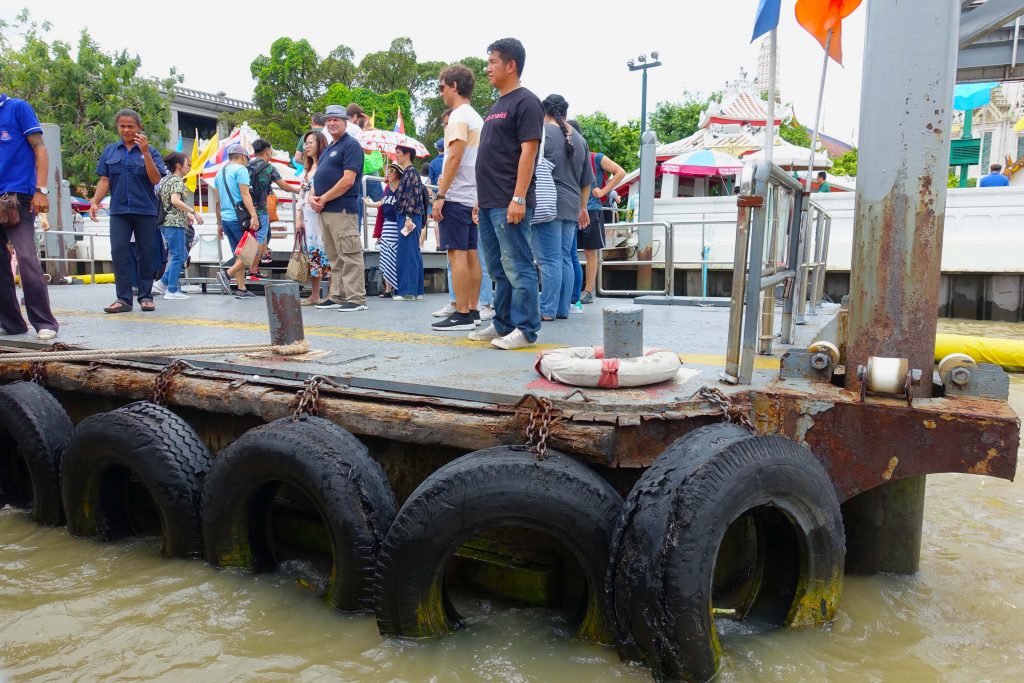 One of the quieter ferry stops

At the next stop, more tourists board the boat and join the already packed numbers. A mother and her teenage daughter jostle for position next to where I’m standing.  We all grip the side rail for support. The young girl is dressed a little immodestly for Thailand. Not all visitors to Thailand are aware, but Thais are modest people. It’s rare for Thai women to wear clothing that will show bare shoulders. Travel advice recommends visitors (especially women) not wear revealing clothing. The young girl’s shorts and shoestring top wouldn’t be considered appropriate according to Thai standards but are often allowed. However, if she was to visit a temple, she’d be asked to cover her shoulders, knees (and most likely her ankles.) Read about my story on the interesting cover-ups people wear at the temples around Bangkok.

A shrill whistle from one of the deckhands announces the arrival at a stop. The river is busy with boats waiting to dock or to move on to their next station. Another quick whistle signals its time to depart. The gangplank is pushed aside, the rope thrown back to the boat. This harried process continues for the next five stops before I alight at the Tha Champ stop for the Temples.

All this for only 15 Baht (50 cents AUD.) An inexpensive passage and fascinating insight into Bangkok life.

My next visit to Bangkok revealed more of this city’s colourful character.