The best things to do in Ho Chi Minh City (Saigon)

Nestled adjacent to the Saigon River, some 80 kilometres from the South China Sea – Ho Chi Minh City is the main commercial and economic hub for Vietnam.

With nine million people and over six million motorbikes bursting onto the city streets at all hours of the day and night, Ho Chi Minh City is mesmerising in its chaos, filled with hole-in-the-wall restaurants, lost in time cafés, and bespoke encounters for the discerning visitor. Saigon as the locals prefer to refer to it, pulsates with intoxicating energy and excitement.

From rooftop dining to high-end shopping here’s how to have an exceptional Ho Chi Minh City experience.

Ho Chi Minh City’s high rise buildings offer incredible city views. Standing tallest is the Bitexco Financial Tower reminiscent of a lotus bulb. For a bird’s eye view over the city, take the ear-popping swift lift to the 52nd floor where the EON 51 Heli Bar, is the highest spot in Ho Chi Minh City. Their cocktail list is extensive. Try the Ho Chi Minh City fizz – an intriguing combination of sparkling wine with Tanqueray gin, mint, and lime juice. For a more refined drop, consider the Le Loi – platinum Johnny Walker whiskey with an Angostura-soaked sugar cube and a dash of soda.

The music can be on the loud side, so stay for a drink, take in the spectacular view and move on to one of Ho Chi Minh City’s fine eating establishments, like La Villa French Restaurant in District 2.

If heights aren’t your thing, Saigon has a selection of rooftop bars on much lower levels.  For a more Vegas-like atmosphere try the Rex Hotel Garden Rooftop Bar. Only five floors up, this open-air rooftop Bar offers views over District 1. A part of Saigon’s history, the bar was a popular gathering place in the 1960s and ’70s for war correspondents and US officers.

For a chilled, laid-back ambiance in chic surroundings, the Purple Jade bar is open from 6 pm – 2 am. With an extensive cocktail and wine list, this cosy bar is the perfect meeting place to enjoy an aperitif or a late-night drink. Lovers of a Cosmopolitan cocktail should try Purple Jade’s version as it’s reputed to be the best in Ho Chi Minh City.

The Ben Thanh Markets, located in District 1 are the best known in Saigon.

Housed in a building built by the French in 1912 covering 11,000 square metres, these markets are labeled in tourist brochures as a must-see for any visitor. Chef and cooking expert Luke Nguyen describes them as “Saigon’s most colourful and vibrant market with everything you need from fabric and cooking gear to souvenirs, dry goods and fake Gucci bags.” I wasn’t in the market for a fake Gucci bag and I found these markets exhausting. Bargains could be found if you’re prepared to hustle and then hustle some more. Many vendors are firm and prices start high. I passed a few foreign tourists participating in the haggling experience. 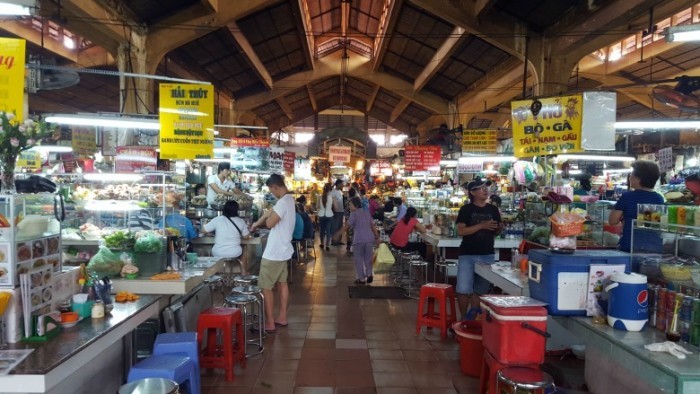 For an authentic Chinese atmosphere in Vietnam try the Binh Tay Market in Cho Lon, District 5 – Ho Chi Minh City’s Chinatown. This is where the locals go shopping.

Markets aside, if you’re seeking more high-end shopping try the central business district’s Diamond Plaza or Ho Chi Minh City Centre for the major department stores. Le Cong Kieu Street (or Antique Street) is opposite the city’s Fine Art Museum. This row of narrow, open-fronted shops on a quiet residential street was once famous for antiques. Now the ceramic, brass and jade are mostly replicas, but antiques can still be found by an eager shopper.

The Vincom Centre sells high-quality and boutique wares. With more than 250 shops over two centres adjacent to each other, this is Ho Chi Minh City’s largest shopping mall. Located in the heart of District 1, you’ll find most of the international brands’ luxury stores including Chopard, Ralph Lauren, Hermes, Jimmy Choo and Hugo Boss.  If shopping creates an appetite, grab a delicious baguette from the Paris Baguette bakery in Vincom Centre A.

Saigon is divided into 19 urban districts. District 1 in the city centre attracts most visitors – probably because most of the tourist attractions are found in District 1! Two of my favourites are the Central Post Office and St Paul’s Cathedral.

Designed by Gustave Eiffel and built between 1886 and 1891, the exterior grandly shows off the French architectural design influence. Once inside you discover this tourist attraction is also a fully functioning Post Office. Massive historical map murals of South Vietnam, Ho Chi Minh City and Cholan adorn the walls. A large mosaic of a smiling Ho Chi Minh looks out over the staff as they serve customers. 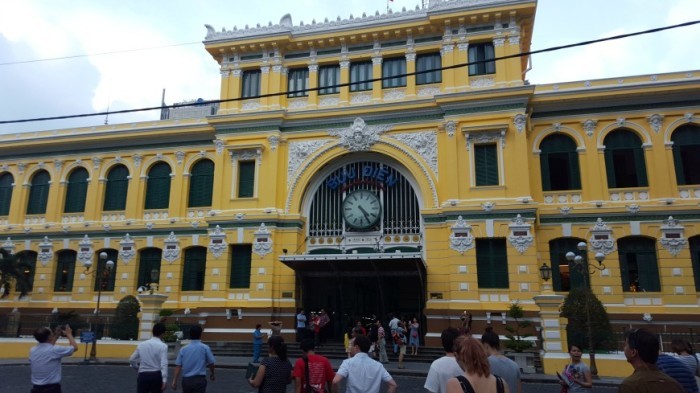 The statue of a serene-looking St Mary holding an orb stands in front of what locals argue is the city’s centre: the Ho Chi Minh City Notre Dame Cathedral. Built between 1863 and 1880 this building is an example of classical French architecture.  Located in a picturesque corner of downtown, its popularity with tourists means there is nothing quiet about this place – outside. Once you enter the imposing façade however, the silence is overwhelming. 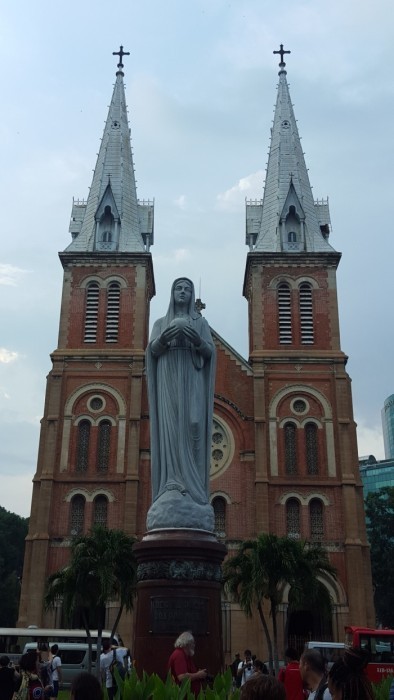 Reminisce about Ho Chi Minh City’s colourful history on the tree-lined boulevard running through the heart of District 1 from Notre Dame Cathedral on Le Duan Street to the Ho Chi Minh City River.  During the Vietnam War, this street was the go-to place for American GI’s and was then known as Tu Do Street – in English meaning, Freedom Street. When South Vietnam was liberated in 1975, the street was renamed to its current version, which means ‘Popular Uprising’. The street is now home to many of Ho Chi Minh City’s upmarket shops, luxury hotels, art galleries, and trendy cafes. Ladies can pick up a beautiful silk scarf at Khai Silk’s flagship store (107 Dong Khoi Street.) Known throughout Vietnam and the world, Khai Silk offers high-quality silks in a mixture of contemporary and traditional designs. The men may be interested in their vast array of silk cravats and ties.

To understand the complexities of the Vietnam War, visit the War Remnants Museum. Despite its somber sentiment, this Museum is frequented by Western tourists. Don’t expect a great deal of conversation as you move around the grisly, confronting exhibits. The upstairs Requiem Exhibition displays documents and visual works by photographers from both sides of the conflict. Compiled by legendary war photographer Tim Page, these show journalists reporting the conflict from a bipartisan perspective. 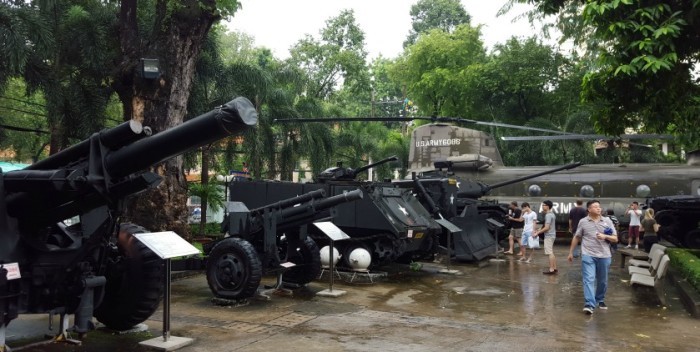 Leftover equipment at the War remnants museum © Travel bug Within

Ensure you spend a morning at the Cu Chi Tunnels –a two-hour drive north-west of the city. The area is known for its extensive network of underground tunnels, used initially in the 1940s by the Viet Minh against the French and later by the Vietcong in the Vietnam War. A personal tour guide will explain the rather grisly warfare techniques invented by the local Vietcong in response to the American tactics. Visitors can experience the close conditions of the tunnels by crawling through a small section, which has actually been enlarged to accommodate the larger size of Westerners. 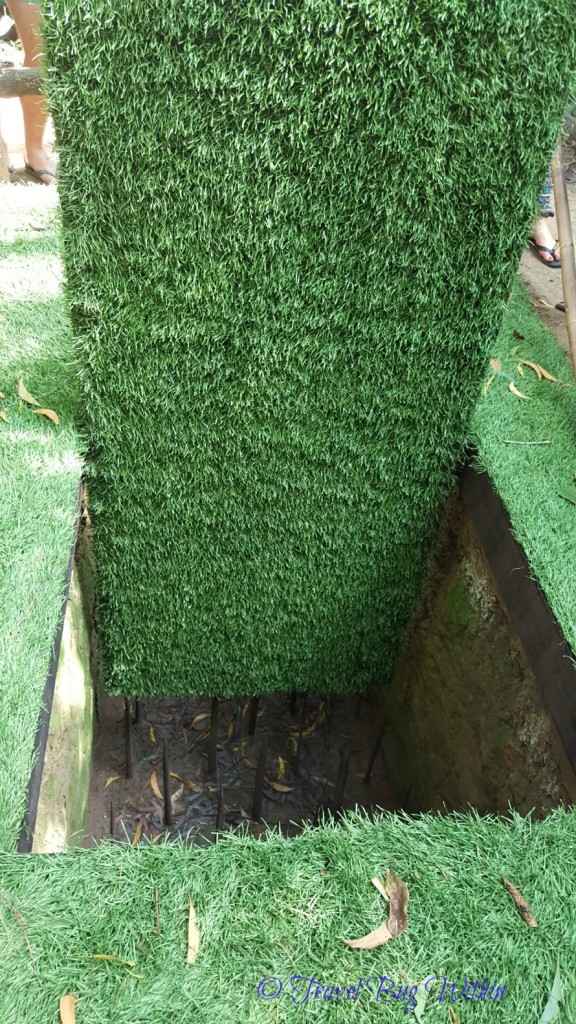 Ho Chi Minh City’s dense population makes it difficult to escape the bustling chaos. There are only so many roads you’re willing to cross before the feeling you’re taking your life in your hands overwhelms. So what to do when you tire of the pace and noise of Ho Chi Minh City?  You escape the city. Ho Chi Minh City is the perfect place to explore more of southern Vietnam.

Vung Tau is only 90 minutes from Ho Chi Minh City. Situated in the South China Sea, Vung Tau is straddled by two mountains, providing spectacular coastal scenery. Although its beaches may not be the best in Vietnam, they’re conveniently close to Ho Chi Minh City especially if you take the hydrofoil.  I met a beautiful person by the name of My Huong Le who is doing an amazing job helping to manage an orphanage in Vung Tau.

Nick-named the rice bowl of Vietnam, this area with its labyrinth of waterways is a three to four-hour drive from Ho Chi Minh City. Taking a tour is the easiest way to experience the Delta and these range from one to five days.  Mango Cruises offer a luxury two-day one-night experience, hotel picks up in an air-conditioned private vehicle that delivers you to the Ben Tre province.  Or experience life on the Mekong by staying in local accommodation small village.

If escaping Saigon is not an option, consider a foot massage or in-house massage in one of the various day spas available at many of the city’s hotels. They are heavenly, very affordable and for the duration takes you away from the hectic pace that is inherently Saigon.

For information on Hoi An 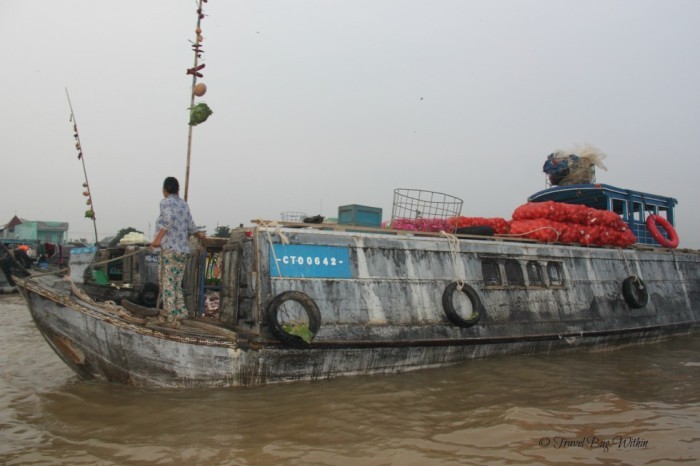 Open hours: 6 am – 6 pm daily for the indoor market and about 6 pm – Midnight  for the night market
Entrance price: Free