A strange noise breaks the gentle silence of the rainforest. Initially, my thoughts were it sounds like the cries of a baby, but then as it repeats, my brain likens it to that of a cat’s meow – but somewhat strangulated.

“That’s a green catbird,” explains our guide Kate Jones. As we continue walking the wailing intensifies.

“Maybe we’re getting closer to it?” she suggests.

I wonder what this bird looks like. Would a creature that makes such a bizarre sound also look unusual?

But no luck. The wailing stops. As with much of the wildlife native to this part of Lamington National Park, they’re rather shy and remain camouflaged from the human eye. But I manage to grab a quick recording on my phone.

Sitting at my desk in Brisbane writing up this story, I re-play the snatched 23 seconds. The catbird wailing, the rustle of leaves and the crunching of footsteps – immediately transports me back to that moment in Lamington National Park.

This was day one of our three-day Gold Coast Hinterland Traverse Walk a pack free guided walk with Life’s an Adventure. World Heritage-listed Lamington National Park is one of the last few remaining extensive areas of subtropical rainforest in the world. The park covers 22,000 hectares of unique wilderness and is home to more frog, bird and marsupial species than anywhere else in Australia.

Who wouldn’t jump at the chance to walk beneath the canopy of these ancient trees and be at one with nature with all its strange sounds?

We swap the coastal outlook of Broadbeach – the meet and greet point at Meriton Apartments – for the lush green of Lamington National Park. Our guide Kate (otherwise known as a Chief Experience Officer – or CEO) and Selina give a rundown about the morning before we jump into our mini-van and take the winding road to the plateau on the Binna Burra side of the National Park.

Before entering the Park, we scrub the bottom of our boots and lightly disinfect them at the pathogen control station (a requirement from Parks and Wildlife to discourage bringing any foreign weeds or harmful organisms into the National Park.) And line up for the obligatory team photo under the sign before commencing our walk.

The crew about to start our Life’s ab Adventure walk

The air is fresh and beams of sunlight sneak through the overhead canopy sending dappled streaks of gold along the path. Our group fans out in single file. There are couples, friends and a few singletons (like me.) We break into a nice comfortable rhythm. Kate stops and points out a strangler fig. Many trees in the National Park are held prisoner by the giant encroaching arms of a strangler fig. Once they grow big enough, strangler figs prevent their host tree from growing wider. Like an unwelcome guest, they compete for nutrients and overpower the host tree’s roots, eventually killing the host tree. They become the dominant tree, the hollow insides of the dead host tree are the ideal breeding ground for fauna – bats, birds and other animals.

Such is the incredible power of nature over long periods. The one constant in this ancient landscape – time.

Kate guides us down past Ship’s Stern and along Dave’s Circuit. Eventually, we come out to a cliff edge overlooking the Numinbah valley. Not long after we pull up stumps for lunch – a delicious fresh wrap and muffin from the Flying Bean Café (our earlier pitstop at Beechmont.)

Snacking on the trails with Life’s an Adventure

Exertion makes you hungry and this food tastes so good! Followed by a hot coffee (or tea for me) prepared by Kate and her trusty little gas bottle, we are re-energised for the remainder of the afternoon’s walk.

We spent a pleasant evening at the historic and very special Binna Burra Lodge. I won’t go into lengths of how wonderful this Lodge was as it sadly no longer exists. Four weeks after staying there, the Lodge was destroyed in some early season bushfires that tore through sections of Lamington National Park. I was devastated about this (as are thousands of other Binna Burra Lodge guests) I wrote this post about Binna Burra Lodge.  Yes, they will re-build – but like anything, this will take time.

Our route, the 21.4-kilometre Border Track, is one of the park’s oldest trails and the backbone of its walking track system, linking the Binna Burra and Green Mountain sections of Lamington National Park. It travels up to the McPherson Range’s temperate rainforests, with multiple outlooks south towards New South Wales, before descending through subtropical rainforest and into O’Reilly’s. Hikers typically complete the walk in six to seven hours. It can be walked from O’Reilly’s to Binna Burra or the direction we took, from Binna Burra to the Green Mountains of O’Reilly’s.

The first break of the morning is at Wanungara Lookout, a spectacular place to stop for a quick coffee/tea. Kate selected this sheltered spot to avoid the windy gusts that are picking up on the more exposed western side. A few groups pass by. They’ve been dropped at Binna Burra from O’Reilly’s and are making their way back to O’Reilly’s.

View from Wanungara Lookout on the border track

An hour later we stop for a re-fuelling lunch at Bithongabel lookout and attempt to shelter from the wind that is picking up in strength. From the edge of the lookout between the trees, I grab a glimpse of the pointy peak of Mt Warning, the remnants of an ancient shield volcano that erupted repeatedly 20-23 million years ago. This is just over halfway and we meet Selina and Lorraine who have walked in from O’Reilly’s side (Selina having driven the bus from Binna Burra.) From here, we press onwards. 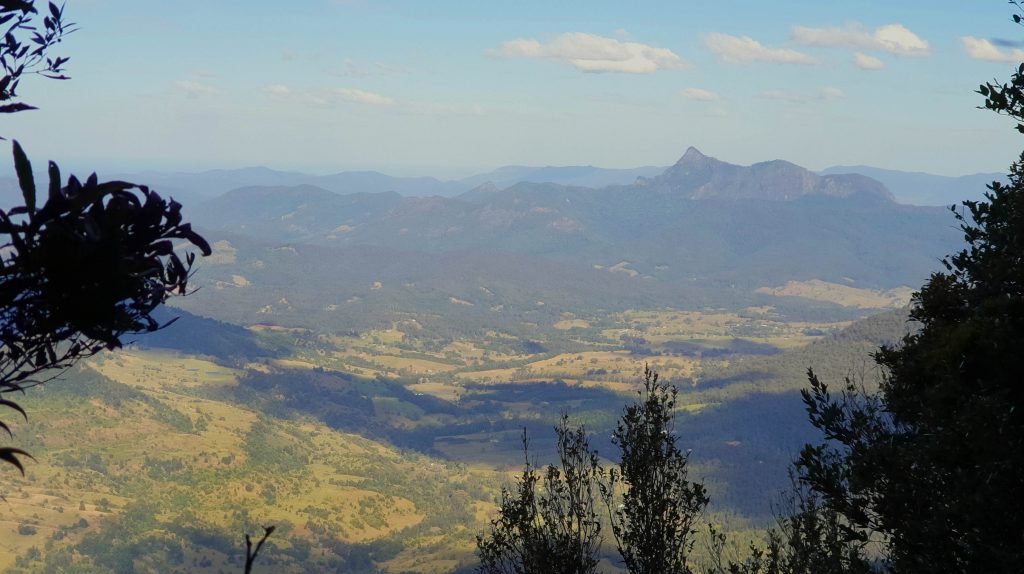 View to Mt Warning on the Border Track

The landscape and vegetation changes throughout the walk. It feels surreal as you pass from shady rainforest to open areas with Antarctic Beech Trees. These mystical moss-covered giants range in age from 2000—5000 years. Wouldn’t they have a great story to tell if they could talk?

As the track descends past these magnificent trees, fatigue settles in (around the 18-kilometre mark.) I keep checking Strava for the distance, knowing that with each kilometre down there are only a few more to go.

At this point, I realised I hadn’t put in enough hill walks or long-distance hiking to get me to match fitness for this distance. Yes, I made it to O’Reilly’s, but my knees and body were exhausted when we hit the boardwalk on the perimeter of the property. If it wasn’t for my walking poles and Selina’s chatter to distract my mind from the exhaustion I felt, I wonder whether I would have made it to O’Reilly’s?

But there is no denying, this is a great walk and an achievement to say you have completed it. And the delicious meal in O’Reilly’s restaurant (accompanied by their own wines) was enjoyed all the more, knowing the efforts we’d all put in on the Border Track.

Day three O’Reilly’s to a winery

Despite the body saying it wanted to sleep in, I didn’t want to miss the early bird feeding at O’Reilly’s. We met outside the front entrance at 6.30 am and followed Nick around the boardwalk as he attempted to attract the native birds. How cool to see a Regents Bower Bird (had to be quick to get a pic) grab a sultana from Nick’s fingers.  And the cheeky Eastern Whipbird was not shy as we wandered along the boardwalk.

Managed to squeeze in a filling buffet breakfast before handing our bags over to Selina to pack in the minibus. It was time for our final walk to Moran Falls. A shorter distance thankfully – only eight- kilometres there and back. We climb the tower to acquire views over the treetops. We walk below and through the enormous base of the ‘Wishing Tree’ – a special tree to the O’Reilly family. Kate shares a story about Mary who works at O’Reilly’s and is the granddaughter of Mick – one of eight O’Reilly boys (from two families) who arrived in the region in 1911 to begin dairy farms. Mary remembers coming to the tree as a child with her Uncles and cousins. They were told they had to run around the tree seven times and then make a wish. But the kids would only make it to five or six times and they’d keel over from dizziness.

And then its time to head back to O’Reilly’s. Life’s an Adventure offer a unique way of leaving O’Reilly’s.  A helicopter flight over the Gold Coast Hinterland was to be the mode of transport to our last place for lunch – Sarabah Estate Vineyards. BUT mother nature intervened and said “no!”  The wind that whipped up the day before around the Park was too strong for the chopper to land and take off safely and it was canceled. So to Plan B. Instead, we took the minibus down the windy mountain road, where we enjoyed a relaxing lunch at Sarabah Estate.

Why do this walk?

The walk is adventurous but with a luxe overtone, appealing to the traveller looking to combine healthy hiking outdoors without curbing on luxury. Apart from my knees feeling they’d been thoroughly worked HARD this was an incredible hiking experience. Three days with a group of people who were all there for the same reason. Getting away and walking in a unique part if Australia. Completely immersed in nature – catlike calls and all.

I am knee ‘challenged’ as a result of a ski incident a few years back in Japan and I seemed to be the one lagging behind, but I also stopped to take photos frequently. Life’s an Adventure take the safety of their guests seriously and I was always ‘shepherded’ by Selina at the back. Under her watchful eye, myself or Warwick the two meanderers were not left behind! Policy apparently.

Regarding the Border Track: it is rocky and pockmarked with tree roots (it’s a rainforest so of course trees feature prominently) so running shoes are not recommended. Life’s an Adventure supply a three-page packing list and I suggest you don’t stray from what they recommend. If you don’t have the right set of walking boots broken in – that can be the undoing of your hiking holiday. Blisters don’t tend to heal overnight!

I have walked distances before – what really challenged me was the uneven ground and the never-ending tree roots which meant you had to really focus on where each step was going.

The group I walked with were mostly older than me – late 50s some in their 60s – so do not think whinging about my knees means the walk is not doable.

Like anything that involves activity – it’s all in the prior preparation.

O’Reilly’s Rainforest Retreat is 90 minutes west of the Gold Coast and two hours southwest of Brisbane.

Disclaimer: The writer was hosted on this trip. All opinions expressed are her own.