Corruption at its best

Can you recall a time in your life and wonder “why on earth did I do that?”

A time when you clearly ignored all warnings NOT to do something, you did it anyway.  For the thrill or sheer ignorance of the consequences which could be injury, losing money, ruining friendships, breaking a special item, imprisonment – the scenarios are endless. Depending on what they were, we reflect on our decisions occasionally.

I was reminded of one of those occasions when looking at old photos from my European backpacking adventure. One where I chose to ignore the laws of the country I was travelling within. The country was East Germany, the year 1989 and East Berlin and West Berlin were separated by the Berlin Wall. The Berlin wall was a formidable obstacle built in 1961 by the German Democratic Republic (East Germany.) This imposing cement barrier often referred to as the “Iron Curtain” separated Western Germany from the Eastern Bloc during the Cold War. Constructed to prevent persons from the East entering the West and vice versa, East Germans controlling the country believed the wall would keep out the fascist corruption of the West.  In 1990, the political parties came to their senses and decided to remove the wall. Its demolition began on June 13th, 1990. German reunification occurred in November 1990.

Twenty-seven years have passed since the wall came down.  This blog is not meant to be a history lesson (and I do love history!) That was for the generation who were born after the Berlin wall who will know nothing of its infamy part from what is written in history.

The wall was a depressing reminder of how political beliefs impact on the freedoms of people.  These were my thoughts as my backpacking buddy and I travelled via train from Bochum, West Germany into East Germany on July 11, 1989 enroute to West Berlin. This 161 kilometre rail corridor was our easiest access into West Berlin. Despite it being 1989 the houses looked like they were frozen in a post war apocalypse – very little modernisation since the end of WWII. The cars also appeared to be trapped in a time warp. From my observations East Germans had limited choice when it came to motor vehicles.  Barbed wire snaked threateningly over the tops of the walls as the train rattled through the East German countryside. Reminding me of a jail at home where the walled perimeter harboured curls of silver barbed wire, to discourage prisoners with the notions of scaling the walls to escape.

The train never stopped at any of the East German stations until the final stop before West Berlin. Here the train was checked by guards with dogs. Another sombre reminder of where we were. Where the East Germany country side appeared depressingly grey and trapped in a time warp, West Berlin was a complete contrast. The influence of Western allies (France, Britain and the United States) who’d occupied the city at the end of WWII were obvious. An assortment of shops, cafes and bars were filled with people from various ethnic backgrounds. A variety of car makes and models circled the streets, indicating wealth and opportunity. This was a modern metropolis with a vibrant vibe.

We caught the subway to Checkpoint Charlie – where we were allowed to inspect the wall at close quarters. I recall feeling disbelief that something this restrictive on an individual’s rights remained so long after the Cold War had ceased. 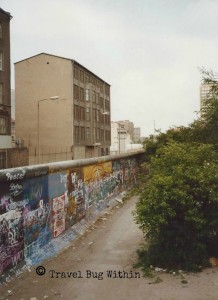 Section of the Berlin Wall near Checkpoint Charlie 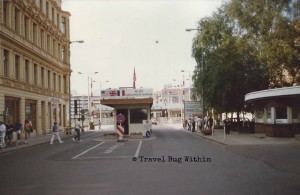 At the border we passed through Checkpoint Charlie – obtaining a day pass for East Berlin. It was a popular thing to do as a tourist. 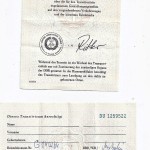 We were made to convert a small amount of Deutchmarks into East German marks. Attempts to spend it proved challenging. Supermarket shelves were bare of produce, as if the locals had emptied them in a panic of impending disaster. We ended up buying some china – a coffee pot and two mugs. Ironic for two reasons. One: a ridiculous item to carry in our backpacks for the remainder of the trip. Two: I don’t drink coffee! 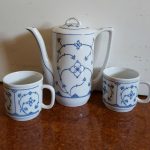 Wandering around the grim city of East Berlin proved an eye-opener and when it came time to return to return through Checkpoint Charlie we were both pleased to be leaving. I wondered what the locals made of the day tourists who visit their city and then leave. On our return train trip to West Germany, the train stopped at the border from West Berlin passing through East Germany. Guards searched the carriages and under carriages (were they checking for escapees?!) While we were waiting for the train to move, I noticed a gruff looking East German guard with his equally aggressive looking german shepherd dog. They were standing in front of a barbed wire fence. A great photo opportunity, so we quickly took a photo.  I should have been content with that (semi-discreet) snap, but when the train moved slightly the guard and dog were right in front of me. I snapped a photo of them just as the train started pulling away. We’d been advised you’re not to take photos of East German “activities” but I thought as the train was moving I would be fine.

Within minutes two East German guards appeared in our cabin. In broken English they demanded to know if I’d taken a photo. It was hard to deny it. I was marched out of the carriage to the end of the train. We entered a cabin and I was told to sit down. Through broken English and my limited German I worked out they wanted to see my passport. Another guard entered the cabin with a small book. He requested I hand over my film. These were pre-digital days of film rolls and old fashioned cameras.  Upset that I was about to lose all my photos of the trip (an entire roll of film) my brain swirled with ideas of how I could get out of this situation – photos intact! Reality check: I didn’t seem to be in the best position to argue.

Do the crime – pay the fine

The guards showed me a translated English paragraph from a book which indicated it was illegal to take photos in the GDR. Breaking the law, I was required to pay an immediate fine of 100 DM. I explained I hadn’t any money on me (which wasn’t entirely true.) Agitated the guard pointed to a page asking what denomination currency I had in my possession. I concocted a story. Creating what I hoped would look like an “innocent” face I indicated  I had “no money” using universal hand gestures. I attempted to explain I’d spent all my money in West Berlin and was flying home from Frankfurt.  One of the Guards who was becoming increasingly agitated, kept demanding the 100DM. He wrote my “fine” in a separate booklet and made me sign it. Handing me a duplicate copy indicating I must to a bank in Bochum and pay the fine.

“Or what I wondered?”

Of course I agreed to this knowing I wasn’t going to do it. I reluctantly handed over my film roll – it was time to stop playing games with these guys. I just wanted to get out of that cabin with my passport and return to my travel companion who by this time was probably wondering what was happening to me.

It may have been 27 years ago, but I still remember this mis-adventure. My travelling buddy and I laugh about it now. “I remember you being taken away and people in the carriage were gesturing to me you would not be back – imprisoned! To my relief you walked back in with the demand for money to be deposited into their bank account. Glad we made it back to the West,” said Catherine my backpacking mate.

It was an innocent action – one that could have ended up with an entirely different outcome. Thankfully it didn’t and we went on to have further adventures backpacking throughout Europe.

My advice from this experience:

Be aware of the rules and cultural requirements of any country you visit and try not to flaunt them.

I still have the fine and transfer ticket tucked into my photo album. A German friend translated it for me: This is a fine for taking a picture of the facilities protecting the border (tower/ fence.) The fine print states that you have to pay within 30 days and have two weeks to put in a complaint. 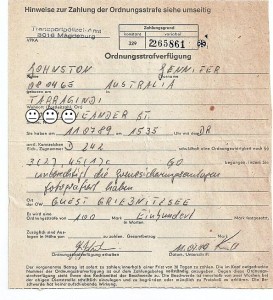 The fine – brings back memories!

Hmmmm that 30 days has long passed!